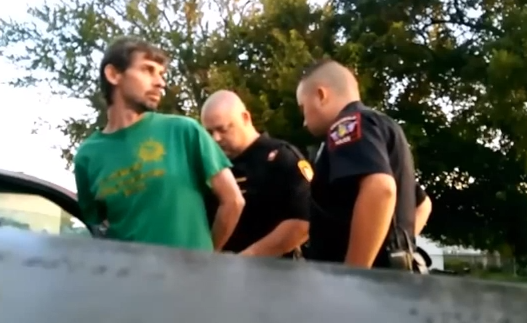 Brent Beebe shared the information below via CopBlock.org/Submit to help get more attention on a situation he was subjected to by two gang members – one affiliated with Spencerville, OH Police Outfit and the other, with Allen County Sheriffs Outfit. After being able to find a reason to justify the attempted road piracy, and because Beebe asked questions and filmed, the catch-all of “disorderly” was applied. I bet area residents are really proud of these “heroes” wearing badges…

I’m from Spencerville, OH, population 2,300 and falling. I traveled three blocks east and one block north of my home to pick up a computer to work on it for some cash. As I turned onto my road on my way back I waived to a  neighbor as I went by. Then, I passed a local cruiser right before I pulled into my driveway. As I was getting out of my car, I saw the lights.

Roger Brown, employed at Spencerville Police Department, got out and demanded me to get back in the car. I did. He got out of the cruiser and asked for license and registration. I asked you I was being pulled over and he said, “I know you as Brent Beebe and I know your license is suspended.” I said “One sec” and started recording.

I asked him again, ‘Why am I being pulled over? I asked him three times as he persisted for some paper work.

Brown walked away and made a phone call. When he came back he changed his story and said I was impeding traffic. (It was Fifth Street, not traveled by many.) Two things,

After 20- to 25-minutes, an Allen County Sheriff employee pulls up and orders me around. Within minutes I was under arrest. I asked why, they wouldn’t tell me until they walked away from the recording phone – disorderly conduct.

No traffic violation or anything more about my license. They put me in the sheriffs car and off to jail I went. After some small talk and a little info on what was really going on the sheriff lightened up a bit and was pretty respectful, although lied to me about laws and other bs.

I was out in an hour. As I got to the lobby of the jail I asked where the phone was so I could call for a ride home. The deputy behind the glass said “We don’t have one, go down to the bar and use their phone.”