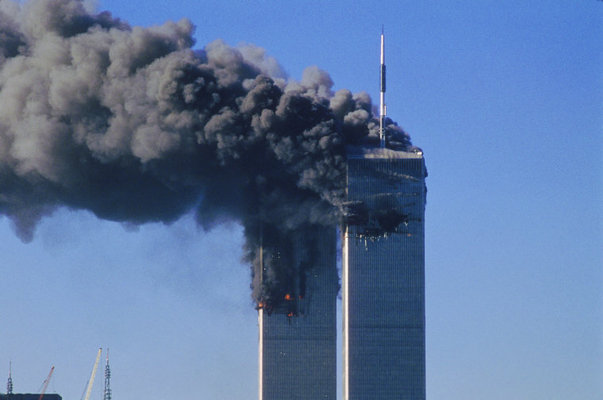 Like many other people, I will never forget what I was doing on the morning of September 11, 2001.  I was returning home after visiting my brother and his new roommate (unbeknownst to me at the time, my future husband) at college.  I listened to the events unfold on the car radio.  The initial reports were chaotic and confusing, and I wanted to get home to see the images for myself.  I got to my apartment just in time to see the first tower fall.  I was in an utter state of shock, completely numb.  This numbness would last for two weeks, and then I finally sat down and cried.

The memories of that day are so vivid that it is hard to believe that 10 years have passed. Personally, I have experienced great joy in the decade since that day.  Shortly after 9/11, I fell in love with an amazing man.  I have had career success, traveled to and worked in one of the most remote places on earth, and I have welcomed two beautiful children into the world.  It has been the best decade of my life, but there are many things that have happened in the last decade that bring me sadness and many times, outrage.

The death toll on that day was staggering.  But the death toll and the steady erosion of individual rights since that day is beyond comprehension.  In the quest for vengeance, there has been more than 25,000 innocent Afghans killed, at least 100,000 innocent Iraqis killed, hundreds of innocent men, women, and children killed by drone attacks in Pakistan, 6,026 U.S. soldiers killed, and millions of people injured or displaced.  In the quest for security, we have been given The Patriot Act, warrantless wiretapping, torture and the suspension of Habeas Corpus, The Department of Homeland Security, The Transportation Security Administration with their naked scanners and “gate rape”, and the undeniable militarization of the police. For the last decade the American people have been force fed a big dose of fear and the overwhelming majority has eaten it up.  In the wake of the immense vulnerability most of us felt on 9/11, Americans seemed willing to let the government do anything in the name of security.  Most have turned a blind eye to the death and destruction abroad and welcomed the intrusive nature of the War on Terror at home.  Few have batted an eye at invasive pat downs at the airport or border checkpoints nowhere near the border.  Few have shown concern with the fact that police departments across the country are procuring armored vehicles, military grade assault rifles, grenade launchers and unmanned drones that are far more likely to be used against Americans than terrorists. Few have protested the inevitable and rapid increase in paramilitary raids for nonviolent offenses that has occurred as the police have become more militarized.  Even fewer have called for the one thing that is most likely to bring us both security and prosperity; the pursuit of peace.

If we learned anything from the bloody history of the 20th century it should be that war will not bring peace; it will only bring more violence and more war.  World War I, the war to end all wars, led to the rise of Hitler and World War II.  World War II led to the Korean War, the Vietnam War, the Cold War, and half a century of a meddling foreign policy that culminated in the events of 9/11.  Even the domestic War on Drugs has led to nothing but more dangerous drugs and more violence, committed by street gangs and gangs wearing badges.  If history really does repeat itself, the War on Terror will not be our salvation, but our downfall.

Individuals in the government have not learned the lessons history has taught.  We should not make the same mistakes.  From time to time, comments on this site, call for reacting to the violence of the police with more violence.  It is easy to see the aggression and the atrocities committed by individuals in the government who purport to protect us both at home and abroad and want to lash out and return violence with violence, but we should be careful not to become what we despise.  Violence is the refuge of thugs and tyrants.  Violence is the tool of religious zealots who fly planes into buildings, murdering 3000 people.  It is the tool of generals who order bombs dropped on civilians.  It is the tool of presidents who order drone attacks on houses full of children.  It is the tool of thugs in blue who cage peaceful people.  Let it not be our tool.

This is not a call for pacifism.  You have every right, perhaps even a moral obligation, to proportionally defend yourself from aggression.  But wholesale aggression against an entire group of people, whether it is a group defined by their borders, their uniforms, or a shiny piece of metal on their chest, in response to the actions of individuals who belong to the same group cannot withstand any moral reasoning. You have every right to seek justice when you have been harmed.  The victims of 9/11 had every right to seek those responsible for the death and destruction of that day and hold them accountable for their actions.  You do not need to be a pacifist to live in peace with your neighbors, any more than the U.S. government needs to be isolationist or pacifist to live in peace with theirs.

On the tenth anniversary of September 11th, we will no doubt once again face the images of that terrible day.  We will hear the names of the dead and we will be reminded to never forget. We should also take the time to reflect on the images of 10 years of war.  We should reflect on not just the names of those who died in those towers that terrible Tuesday morning, but of the unknown, nameless people who have been killed by our bombs and bullets abroad.  We should take time reflect on how we can be the peace that we seek.  We should take time today and everyday to remember that “There is no way to peace, peace is the way.”