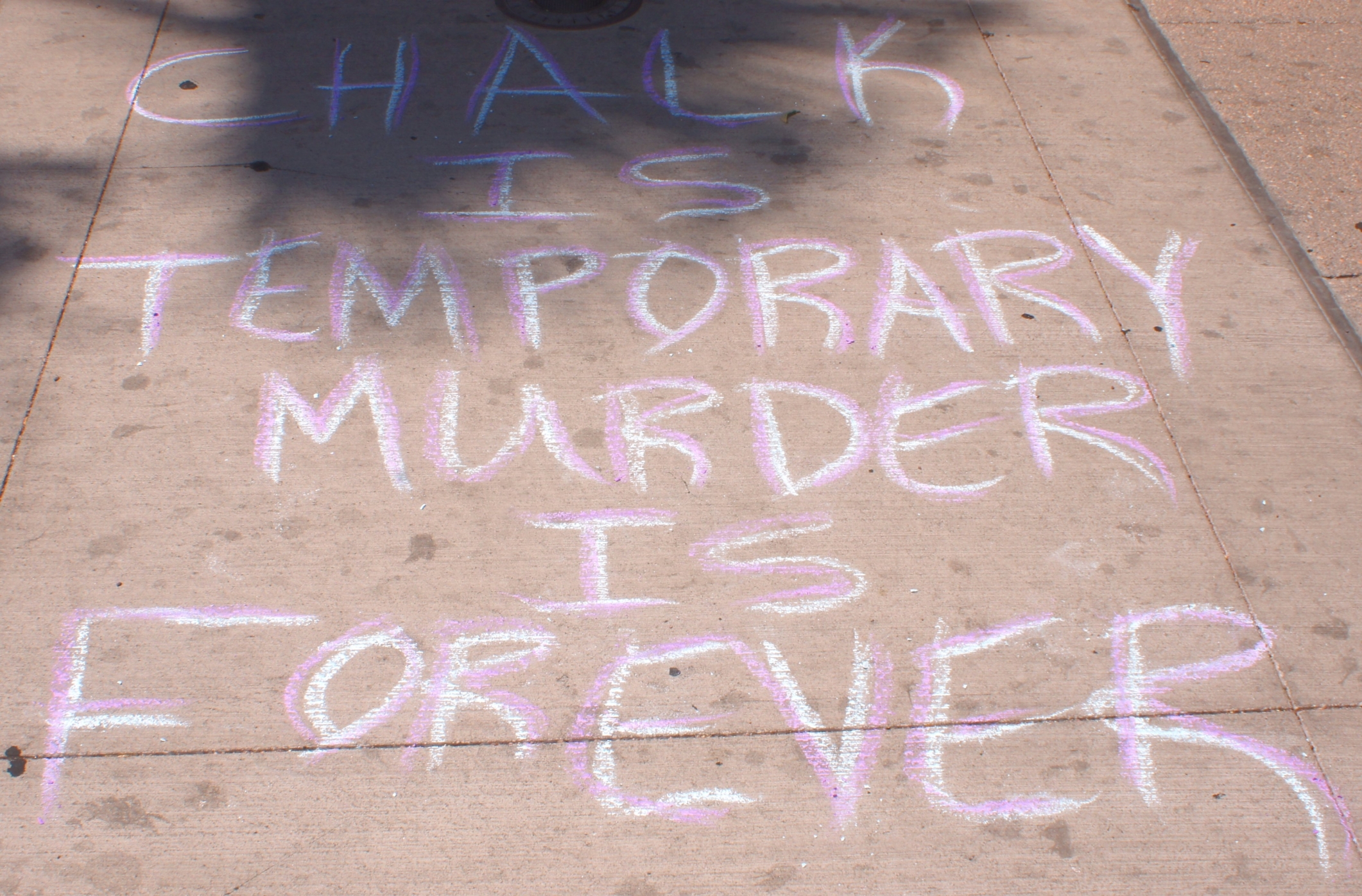 Note: This was originally posted on the Nevada Cop Block site by Kelly W. Patterson, who is one of the NV Cop Block members involved in the lawsuit.

Early yesterday (Sept. 26, 2014), four people associated with Nevada Cop Block and the Sunset Activist Collective filed a civil rights lawsuit over arrests by the LVMPD in August of 2013 during anti-police brutality protests in which drawing on sidewalks with “sidewalk chalk” was labelled as graffiti, as well as a pattern of harassment by the Las Vegas Metropolitan Police Department, both before and after those arrests, designed to intimidate us into ending our advocacy for victims of police brutality in the Las Vegas area.

The federal lawsuit filed by attorneys Maggie McLetchie and Robert Langford on behalf of Ballentine, Catalino Dazo Jr., Gail Sacco, and I (Kelly W. Patterson), was reported this afternoon in the Las Vegas Review Journal which includes these details of the lawsuit (some of the links within the quoted content have been added by me):

“Four activists who express themselves with sidewalk chalk filed a civil rights lawsuit Friday against the Metropolitan Police Department.

According to the federal lawsuit, the department has engaged in ‘a policy and practice of deliberate indifference to the constitutional rights of individuals engaging in peaceful protests‘

‘Plaintiffs have been improperly arrested, cited, and harassed for engaging in free speech,’ the complaint alleges…

According to the lawsuit, the Police Department has allowed its officers to harass, cite, arrest and search the plaintiffs ‘for peacefully writing in water-soluble chalk on a public sidewalk’ that Las Vegas police officers had instructed them to write on.

The document claims these actions violated the plaintiffs’ ‘constitutional rights to free speech, expression and assembly, rights to be free from unreasonable searches and seizures and unlawful arrests, and substantive and procedural due process rights.’

Additional state tort claims in the lawsuit include false imprisonment, negligent training and supervision, and intentional and negligent infliction of emotional distress…

Las Vegas police began harassing protesters on May 1, 2013, according to the lawsuit, and three of the plaintiffs were cited during a protest at the department’s headquarters on June 8, 2013…

On that date, the lawsuit alleges, Sgt. Mike Wallace approached the three protesters and told them that writing with chalk on the sidewalk constituted graffiti. He then detained them on the sidewalk for about 45 minutes, according to the lawsuit…

During two demonstrations in July 2013, protesters used washable colored chalk to write critical statements of police on the sidewalks outside the department’s headquarters and in front of the Regional Justice Center.

As a result of the July protests, Ballentine, Patterson and Dazo were charged with gross misdemeanor counts of placing graffiti on property and conspiring to commit a crime.

Police arrested Ballentine and Patterson on Aug. 10, 2013, while they were walking to the department’s headquarters to chalk, according to the lawsuit

Ballentine spent three days at the Clark County Detention Center, where he was denied his medications and suffered from anxiety, according to the lawsuit, and Patterson spent four days at the jail.

The charges were later dropped. District Attorney Steve Wolfson said new evidence showed that courthouse marshals had directed the protesters to chalk in a specific location outside the justice center.

‘There wasn’t expressed permission, but there was implied permission to use the chalk on the sidewalk outside the courthouse,’ Wolfson said.

But McLetchie said the district attorney fails to understand that “the Constitution forbids the government from requiring prior permission before you engage in First Amendment-protected activity.”

According to the lawsuit, the citations issued in June 2013 and the arrests made in August 2013 were designed ‘to chill future speech.'”

The full Review Journal article can be read here.

I’ve been advised by our lawyers not to comment in detail on the case while it is active, but you can read pretty much every article ever written about the case right here. (It actually progresses from the most recent stories to the latest. So, if you want to start at the beginning you have to backtrack to the last page.)

As I said, I won’t be doing any extended commentary on the case in this post. However, I will point out that I made Metro and Sheriff Gillespie a very reasonable offer (see the picture to the right) early on during the protests that I don’t believe they ever even considered accepting and still haven’t shown any real interest in to date.

Also, I think it’s amazing that the main cops involved in these ridiculous arrests are named “Mike Wallace, Chris Tucker, and Lt. Liberty.” I’m tempted to think they are just making up names at the LVMPD.