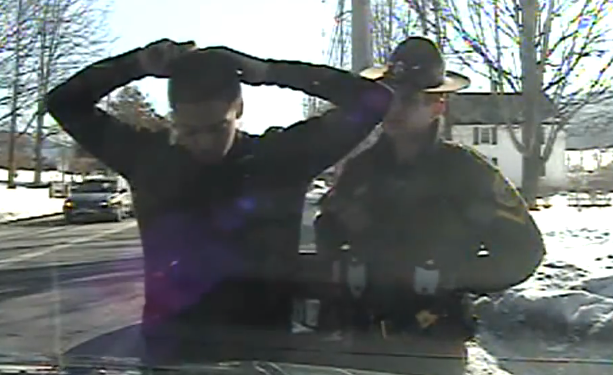 BKG shared the content below via CopBlock.org/Submit, which documents the actions of Lewis Hatch, who prevented Greg Zullo’s freedom of movement, stole his vehicle, and caused him other harm. Hatch is employed at the Vermont State Police. The ACLU-VT is now involved on behalf of Zullo.

Greg Zullo was pulled over on March 6th, 2014. A Vermont state trooper said he smelled marijuana but otherwise had no evidence of a crime. The pretext for the stop was that a small amount of snow on the back bumper of Zullo’s car was making the validation sticker on the rear license plate difficult to read.

Hatch ordered him out of the car and attempted to get Zullo to allow him to search the vehicle, without a warrant.

Knowing his rights, Zullo declined to waive them and refused the search request.

Hatch called a tow truck to take Zullo’s car to the Rutland state police barracks. Zullo asked for a ride home so that he wouldn’t have to walk the eight miles to Rutland, but Hatch refused.

From the write-up at VTDigger.org:

Police violated a Rutland man’s constitutional rights when they stopped him because of a snow-covered license plate and then searched his car without probable cause, according to a lawsuit filed by the American Civil Liberties Union of Vermont (ACLU-VT).

The suit, filed in Rutland Superior Court, alleges that police violated Greg Zullo’s right to be protected against unreasonable search and seizure. According to the lawsuit, Zullo was left stranded on the side of the road eight miles from home after police impounded his vehicle because a state trooper smelled marijuana but otherwise had no evidence of a crime. Police issued no warning or ticket for any offense, ACLU-VT alleges…

“The police must stop treating people like criminals if they suspect that a small amount of marijuana is involved,” said ACLU attorney Dan Barrett, who, with Stowe attorney Antonio Pyle, represents Zullo in the suit. “There is no such thing as probable cause to believe that a crime is being committed when the ‘crime’ is a civil offense. Civil offenses aren’t crimes.”