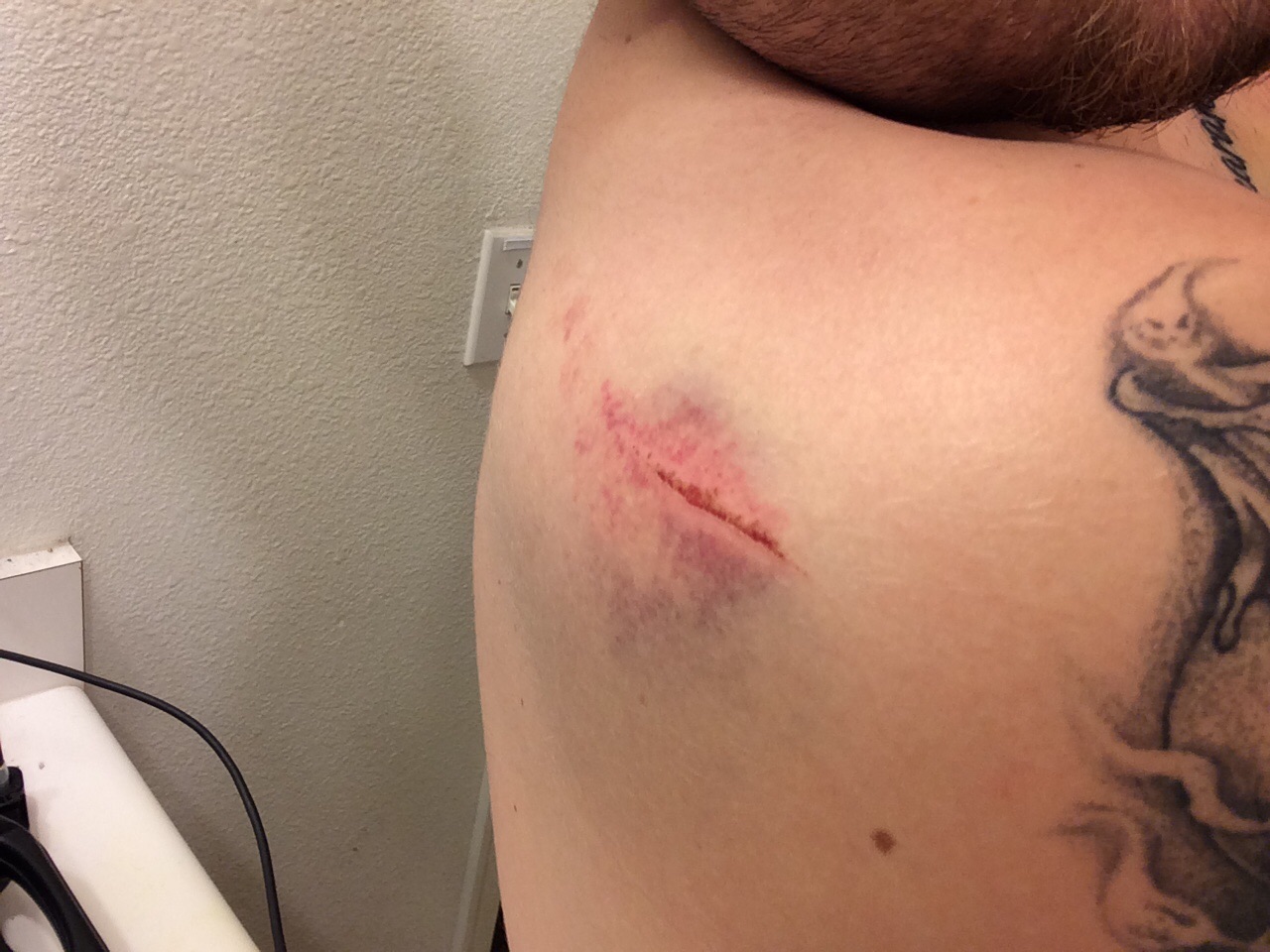 Bridger Kennedy shared the information below via CopBlock.org/Submit about the unwarranted treatment some employed in the Clark County Detention Center used against him.

Hey, my name is Bridger Kennedy. I was just in jail for a DUI (my own prescription medication) that I had taken four-hours prior to driving and while I was in the Clark County Detention Center in Las Vegas, Nevada I was beat up pretty bad in the about six correction officers.

Prior to my intake picture my face was pushed up against the wall and my bear feet were stepped on with their boots, then after the picture was taken – both front and sideways being jerked around like a rag doll – fingernails gripped into the inner part of my biceps leaving bruises.

I was then put in this black restraint chair and my hands were handcuffed til the very last notch on the cuff. I was shoved to sit down, my balls kneed on by one of the officers, my ankles were cuffed as tight as possible too, and then put some type of thigh winch strap thing around both my legs – smashing my knees together. I was very mad at this point and was was left in the chair for two hours. I then was taken out and seated in the big intake room (left side guys, right side girls). I was seated in the last row 2nd or 3rd seat to the left, everything was going fine. About 30-minutes had passed by when I had seen people asking to register on the phone so that they could make calls to people outside of the jail on one of the two phones available to do so.

There was one man on the left phone registering and there wasn’t anyone on the right phone, so I asked this African American female correctional officer (CO) if I can please register? She rudely answered with a snotty ‘No’ and turned away from me, at that point I didn’t say anything. About one-minute later a female inmate asks her if she could register and the CO gladly says ‘Yes’ to her, so at this point I said that is messed up why can’t I register and she can? Then this Hispanic CO says “Stand up motherfucker get over here” so I stood up and by the time I was on my feet he was rushing me and grabbed my wrist then threw me to the side.

By this point two other officers were running up and helped him throw me face down onto the ground and kneeing me in the back of the head.

I just had surgery to get my portacath removed two days prior to being in the jail. I have been in remission from cancer for three years now I was diagnosed with non Hodgkin’s lymphoma when I was 17 (I will be 21 on December 28 of this year). I was face down yelling to them I had cancer and just had surgery.

The CO’s came over and piled their weight on top of my chest head arms legs back and feet while I can barely breathe I was yelling I have asthma as well since I was a little kid and now they are yelling to me to stop resisting when I wasn’t resisting whatsoever.

I couldn’t move and inch of any part of my body, at this point I am in excruciating pain and am being lifted up by my wrists and being taken back the the black restraint chair again. I was then once again strapped into the chair as tight as they possibly could after about 45-minutes in the chair. I just couldn’t bare the lack of circulation to my hands and feet. My upper thighs had lost the feeling in them by now, so I power through another hour and about 25-minutes of the chair each time having a spit mask on when I never spit or attempted to once.

They took me out and went and sat back down once again in the same chair I originally was in the first time I sat.

Editors Note: Bridger was encouraged to reach out to those involved with Nevada Cop Block, who have done an excellent job focusing the disinfecting light of transparency on the criminal LVMPD outfit.