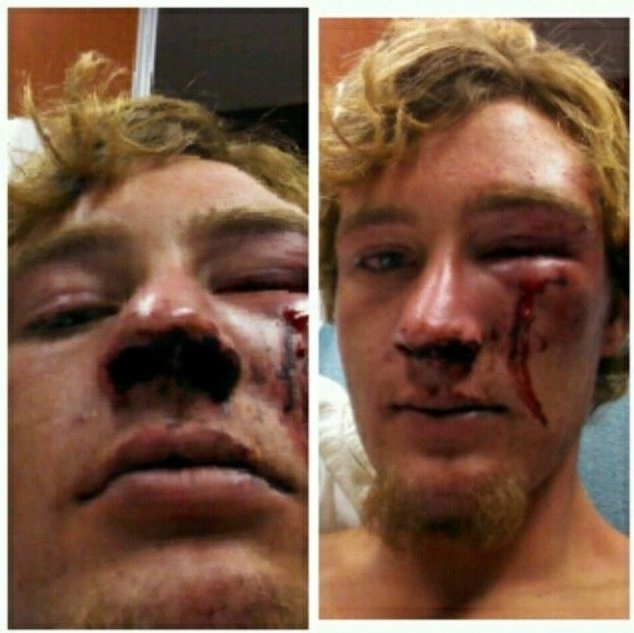 The information below was shared via CopBlock.org/Submit by a friend of 19-year-old Tyler, who was, for no stated reason, beat down by seven employees of the Lima, Ohio Police Outfit, then threatened with multiple catch-alls. If you witnessed the incident or even better – captured objective footage related to the exchange – please speak out.

Tyler Paxson was with a friend and went to an area of Lima, Ohio at the friends request to meet some girls. There were cops in the area when they arrived due to a completely separate and unrelated call about a loud party in the street. These boys arrived at the wrong place at the wrong time.

Tyler and his friend were parked out back in an alley way and approached a home of someone his buddy knew. An officer approached the two from the front and asked who they were and what they were doing. Tyler said I am an American citizen, doing nothing wrong and I don’t have to answer that and I have the right to walk away.

The officer then grabbed Tyler, Tyler tried to jerk away and he was slammed to the ground, slammed into a cement wall when the other six officers ran up and one immediately punched him repeatedly in the face and he was thrown down and they continued to kick him in the head, ribs, and beat him on the back with baton and in the head. Witnesses also saw them drag Tyler unconscious from the back of the building to the front and take him away. From the write-up Man accuses police of excessive force by Greg Sowinski at LimaOhio.com:

Paxson said he was knocked unconscious and woke up in the back of a police car at police headquarters. Another officer recognized Paxson as a man who had a traumatic brain injury a few years earlier in an all-terrain vehicle accident, so officers took Paxson to the hospital for treatment.

The officers are investigating themselves, and have now decided in September to charge TYLER with felonious assault! They also charged him with underage, obstructing, resisting and falsification.

Note that Officer Nate Garlock, who is now claiming the assault, stated in his report there was NO OFFICER INJURY! The Justice For Tyler page on Facebook communicated that Tyler entered a written not guilty plea to the threats levied at him.