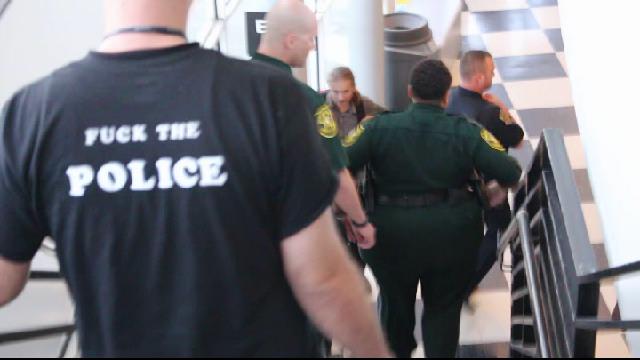 The content below was shared by Michael Burns via CopBlock.org/Submit about his experiences within legaland, where those who purport to epitomize integrity were allowed to lie without question, and where, despite claims of a transparent forum, Michael was told that he could not show objective content pertinent to the conversation. Fortunately, at the conclusion of this most-recent adventure in legaland, Michael is no longer threatened by Broward County Sheriff’s Outfit employee Paul Sada.

I got a little tired of going to court in a suit and tie to fight against lying officers with judges that did not care about the lie even when it was proven with a video.

I was happy this time going to court in my FUCK THE POLICE t-shirt fully expecting to lose either way.

I was denied my ability to admit video evidence to prove the officers were lying and I was told I had no 5th amendment right to remain silent upon being asked a question I didn’t much feel like answering. I did not answer it… Once upon a time I would wait my turn to talk and be soft spoken… This time I was rather out-spoken however end the end.. I won my case!…

This goes back to a traffic ticket for “obstructed tag” from having of all things, an FOP badge on it. (don’t ask.. its a love/hate thing with having it on).

The actual reason for being pulled over was because I was attempting to record what the Broward County Sheriff was doing on the size of a highway breaking up a get-together at a public boat ramp..(albeit at 1:30 in the morning). One officer told me they were just “ruining peoples fun”.. then said they don’t know what they were doing but they could be doing all sorts of illegal activities”.. non-sense.. as I made my way up the boat ramp/levee Deputy Paul Sada of the Broward County Sheriff’s Office told me I could not be there to film… even though it was public property. After getting his name, I left without an argument.

Once I left he got behind me along with six other BSO officers finally pulling me over five miles down the road as I was about to make a u-turn to go home. (The car is not in my name so.. he really wanted to pull me over to get my name.)

Original video from when I got the ticket, uploaded on March 17, 2014