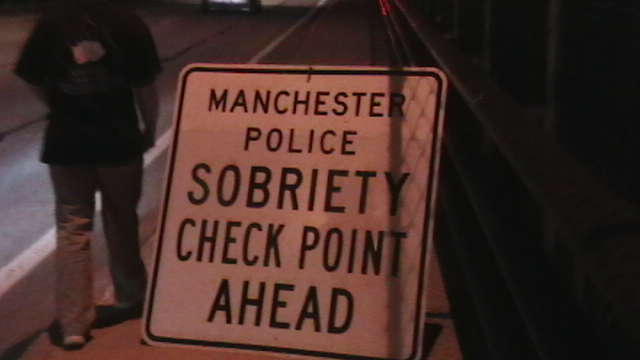 On September 9th the Manchester Police set up a “DUI checkpoint” at the end of a bridge here in Manchester, NH. Pretty sneaky of them considering you’re unable turn around and avoid your 4th amendment right violations, well without driving off the bridge.

It didn’t take long for “Shire” (or New Hampshire as the state calls it) residents and activists to respond to the checkpoint. Within an hour, all four corners of the intersection leading to the bridge had activists on them yelling, “Police checkpoint on the bridge! Don’t take the bridge.” Armed with signs and their tactical approach (covering all corners) the activist diverted 100’s of motorist who honked, flashed their lights and even gave money in support of the group effort to save folks from the police.

I know some reading this are saying, “WTF? Drunk drivers are dangerous and could end up killing someone. Why would you help them get home or avoid the checkpoint.” This is something I’ve been asked before and have even blogged about in the past. I stated then that:

Do I endorse drunk driving? NO, does anyone really think its right to drink and drive? I don’t know, maybe. If someone causes harm or damage to property then they should have to make that right. If you choose to drive under the influence over and over; I hope you’re able to live up to the accountability you will face when something goes wrong. By replacing the damaged goods for the actions that took place after drinking and driving. If you have a loved one who is doing such acts, I hope you step up and take action. Telling this person how you feel and that the risk is not worth it.

Besides the fact that you can’t prevent crime (something I learned in Minority Report – thanks Tom Cruise), which is my point above, DUI checkpoints are used as the excuse to pull you over. The city or police departments pitch it as a “keep the roads safe” program. Yet, does it really keep people safe? At least ten officers spent about four hours in ONE spot looking for drunk people. Even if we hadn’t CopBlocked the checkpoint, word would have gone around exposing the location. If the goal was to keep the roads more safe, wouldn’t the officer’s time be better spent mobile? Or maybe the taxpayers – federal taxpayers, checkpoints are often federally funded via grants – could have saved money by not having one at all?

On top of that, officers routinely ticket drivers for damaged windshields, broken exhausts or a number of vehicle ‘violations’ that have nothing to do with drinking and driving. Manchester Police Officers in this video were writing down licenses plate numbers. They claimed they weren’t ‘running’ them but “just writing them down”. Oh, isn’t that nice to know.  Besides the obvious flaws in such police programs, is it ok to violate the rights of everyone to catch a few drunk drivers?

Should we punish people, with a fine or jail, who don’t harm anyone else? Can the state be a victim? Who is harmed when the police arrest you, without damage to another’s property, for DUI? How can they be sure they prevented an accident? What if all the police did was prevented a person from getting home, going to work and continuing to feed their families? That’s more likely to happen than the prevention of accidents or crimes.