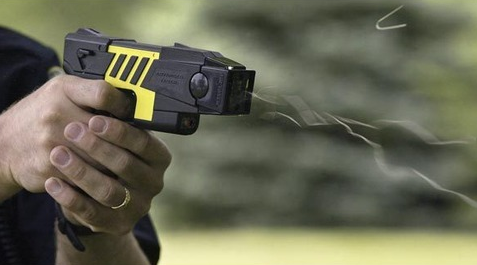 The incident below was shared via CopBlock.org/Submit by an individual concerned about how his cousin was treated by a person employed at an outfit known to be corrupt.

Donathan Durham, employed at the Monterey (TN) Police outfit, approached a man who had been assaulted by two people, and was already on the ground – and tased him. At least that’s what Carl Bohannon alleges happened in the lawsuit he filed against Durham and others who violated his rights in the parking lot of a Dairy Queen.

Amy Davis wrote at the Herald-Citizen.com that:

According to the lawsuit — filed Sept. 26 with the Putnam County circuit court clerk’s office — Carl Bohannon of Homerun Drive had been sitting in his car at the Monterey Dairy Queen on Sept. 26, 2013, talking on his phone when another car “came speeding” into the parking lot.

In that car were Monterey residents Jason Davidson, Jacob Cross and Amanda Matheney, who allegedly hit Bohannon’s car, causing the driver’s side rearview mirror to break.

Bohannon alleges that when he confronted them, Davidson and Cross got out of the car and “started violently attacking” him while Matheney “encouraged the assault.”

The lawsuit says Bohannon “did not respond with any physical aggression” and that Davidson, Cross and Matheney left him and pulled up to the drive-through window.

Bohannon said he walked to the car and told them they could not leave until police arrived, at which point the three allegedly got out, with Davidson and Cross assaulting him again.

“After several moments, the defendants abruptly stopped assailing (Bohannon) and stepped away from him,” the lawsuit says.

“At this time, the plaintiff was lying on his stomach, and he tried to get up.”

Bohannon claims he then felt “sharp pains” in his back and fell to the pavement after Monterey Police Officer Donathan Durham deployed his taser.

This is my cousin who just happens to be a marine core vet (joined in 98 and weathered the storm through around 2006/07 when he decided to do some confidential stuff for the defense dept. on his own) There is a tape out there thats showing this hero getting tased after being put in handcuffs for defending himself against another guy in a parking lot.

This officer has been fired from multiple police offices in middle Tennessee but still has his job. The chief is lying to police and the fast food place was honestly scared to give the video to the victim. I just want someone to see this cause it hurts me and my family a lot cause hes been shot three times while he was doing what his country asked him to do.

Other boys had super heroes and movie stars that were there hero and this guy was my superhero when I was a kid. I hope someone sees this and gets the word out there but only in a respectful manner cause I want people to know but then again I don’t want some idiot to make threats and that end up being detrimental to the case cause I want my cousin to win. Hes a hell of human being and doesn’t deserve this crap. There wouldn’t be a case if there wasn’t enough evidence. So you tell me if it was normal procedure.

A search of “Monterey Police Tennessee” returns multiple results from just the past couple years that show a pattern of misconduct:

I’m sure not many Monterey inhabitants are too happy with the “service” provided by those wearing Monterey police badges, Bohannon among them. Such is the accountability afforded by a coercive monopoly… Live in this area and want to help change things for the better? Connect and collaborate!