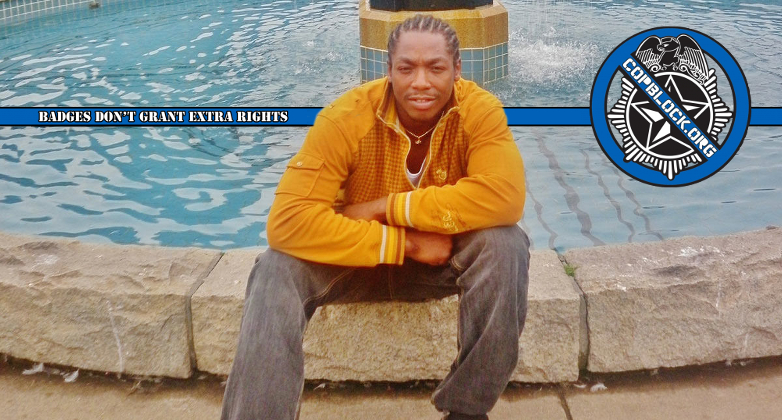 Remy Mckenzie shared the information below with the CopBlock Network via CopBlock.org/Submit about an incident in Ontario that unfortunately, is far too common – a person traveling being stopped (almost without exception, for a non-crime), then brutalized, tasered, or shot, then no information released from “the authorities” as they sit by until attention dies down a bit and they work to concoct a narrative, while the incident is “investigated” by other “authorities” who are incentivized to side not with the truth, but with others who subsist via the political means.

Jermaine Carby was the passenger not the driver as news reports are trying to falsely state. I attended his funeral today and the family states he was shot 4-5 times and tasered twice once he was down.

His cousin La Tanya Grant has taken pictures of his body after the 5 days it took the coroner to release his body to the family and the incision marks are not of a typical autopsy and it seems some organs have been removed. The police are trying to say he was driving (he was the passenger) and was shot twice (he was actually shot 4 or 5 times) but reports seem altered from law enforcement.

Richard Appleby, another witness at the scene told CP24 that he heard the police officers say “Drop the knife” a couple of times and words to the effect of “Don’t make us shoot.”

“He walked slowly towards them with both arms stretched,” said Appleby. “I was too far to see a knife. It might have been small.”

One woman, Latisha, who did not want to give her last name said she was driving by on Queen Street when she saw the man come out of his car with his hands raised above his head.

“He had his hands up… saying ‘What?’ to the cops and he started walking towards them,” said Latisha. “As I drove by, I didn’t get to look back but I just heard gunshots, like five gun shots.”

Jermaine’s cousin La Tanya Grant asked where – if there was a knife – is it? Why the censorship?

They are using his criminal past from another province to victim shame and provide the picture of a dangerous violent criminal, including the manslaughter charges (which if investigated properly the victims stab wounds would not match a person of Jermaine’s height of 6’4″).

Because this is Canada they paint a picture of non prejudice which is a lie! Black people here get stigmatized just as much as African Americans because of the reputation internationally of African Americans.

The incident is now being “investigated” by employees of the Special Investigations Unit.

Please contact La Tanya Grant on Facebook for more info this case is being pursued by the family and we need help and awareness. Please investigate and spread the word its not ok to shoot unarmed people based on race prejudice and fear!