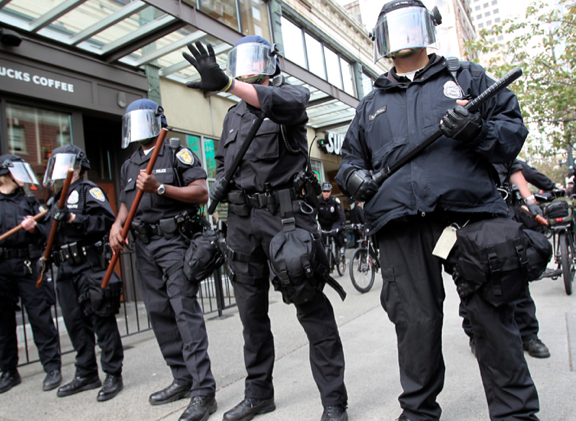 The content below was shared by Matt Winkeljohn, who authored and originally posted it to ResistTheTyranny.com, a site “dedicated to bringing you some of the up to date news and videos about government atrocities in the United States.  You are not going to find left or right bias here, as they are all criminals on the hill.”

ARE THE POLICE ACTUALLY NEEDED?

With nationwide rampant police misconduct and the growing concerns about excessive force and militarization, are we at a point in this country where we would be better off without the police?

Let’s first look at what most people believe that we, as a nation, gain from having a massive police presence…

The average day for the vast majority of police, is sitting in his or her patrol car and stopping motorists for traffic violations.  This usually consists of the motorist illegally talking on their cell phone, running a red light or exceeding the speed limit… Not actually harming anyone.  It is then the cops duty to turn on their obnoxious and distracting lights and sirens, pulling out in to busy traffic (or making an illegal u-turn) and while talking on his/her radio and using a laptop, also breaking the speed limit in order to catch you and pull you over.  They do this in an attempt to teach you a lesson in safe driving practices.  Irony?

Most people are led to believe that this sort of thing is necessary to the “safety” of the people, when in fact, it is counterproductive and more unsafe than the initial reason most people are pulled over.

The remaining number of police who are not covered under the above statement, either work at a desk or are detectives.

Detective work is something that is universally needed however.

If a real crime is actually committed and the person who was violated isn’t able to identify the criminal, then someone has to find out who committed the crime.

These “detectives,” with the help of a crime scene unit, then collect evidence and statements in order to begin an investigation in to the crime.

Since we have now established that the small minority of police that actually do any good are ones that respond after a crime has already been committed, let’s look at Acapulco, Mexico.

The police in Acapulco recently went on strike and the people couldn’t be happier!

The following is from Jeff Berwick, the chief editor of The Dollar Vigilante. It all started over a month ago, right here in Acapulco, Mexico, when I commented to a good friend, “Have you noticed how much better traffic has been lately?”

He responded, “Yes, traffic flow has been so much better… it’s because the Transit Police went on strike.”.

It turned out that was the case.  The Transit Police in Acapulco had went on strike and all of a sudden many local residents were noticing how much better traffic, which can get to gridlock levels during peak holiday periods, had become.

Weeks went on and you could tell that almost everybody had become aware of the lack of transit police and no one was adhering to red lights if there wasn’t any oncoming traffic.  The majority of people began treating red lights like a “yield” sign.  They’d slow down, check that no cars were coming, and if there weren’t, they’d just roll through the red light instead of sitting there for a minute or two, as traffic backed up behind them.

But, it got even better.  The municipal police also then went on strike… and no one noticed.

I mentioned to my friend how much everything has been so much better in Acapulco for the last few months and said people just seem happier and I assumed it was just because traffic was flowing so much better.  He then said, “Actually, the municipal police are on strike now too… so people are probably just a lot happier in general because there isn’t really anyone around to bother them.”

Those who believe that police are necessary to the safety of a community will surely think that crime must have gotten worse there, but that’s not the case at all. When you take in to consideration that police in the United States look more like a military unit these days than anyone who is there to actually protect you, the thought of getting rid of police seems like a pretty good alternative.

Every day, the American people are being faced with an ever growing militarized police state.  These police will point guns in your face, taser you and beat you, all for not showing an I.D….even when you don’t have to.

The ones in their patrol cars are, at best, hypocritical thieves who break more laws than you do when they pull you over, threaten you with kidnapping and then extort money out of you by stacking charges against you and revoking your freedoms on the side of the road.

As the video below details, you are paying in more ways than you even realize.