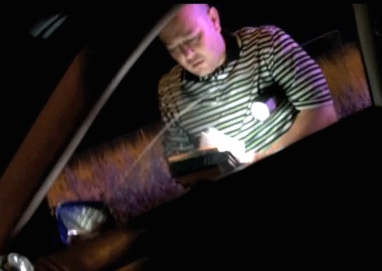 The content below was captured and shared by Sarah via CopBlock.org/Submit in an effort to get more attention on an exchange she had with Nick Garcia, whom she likened to a bully with a badge.

I was driving south bound on the freeway approaching the 10600 south exit in Sandy, UT when I saw a police officer going slower than the speed limit. I was traveling the speed limit and passed him. He turned on his lights to pull me over. I hesitated pulling over because I didn’t feel I had done anything wrong [true – she was never accused of causing a victim] and felt he was over stepping his authority (thinking he didn’t have jurisdiction). He gets to my car and I see he isn’t wearing a uniform.

The video shows the stop and shows me expressing my concern and him immediately telling me he is going to show me how much jurisdiction has. I feel he violated my First and Forth Amendment rights because it isn’t illegal for me to ask questions. He gave me a ticket for speeding and it happened to be where fines double. My car was towed because my insurance had messed up my VIN.

He was out for revenge and wanted to teach me not to question authority.