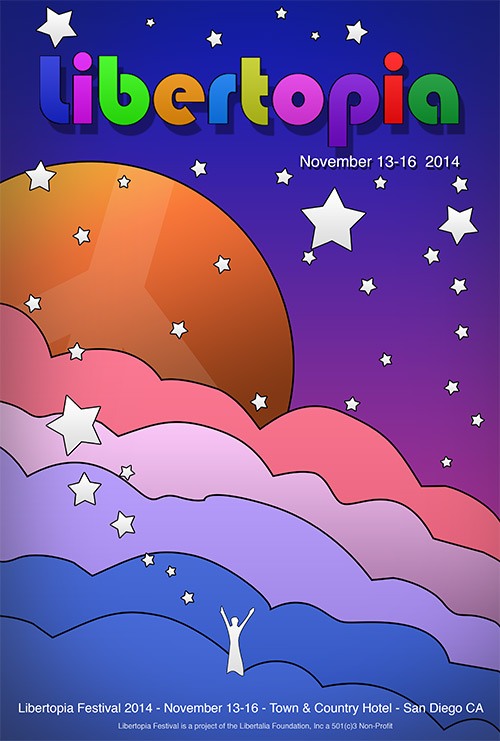 Libertopia is a fantastic annual event where freedom-minded individuals congregate in San Diego and have a great time, but don’t take it from me, here’s what Jeffrey Tucker, Libertopia 2014’s Master of Ceremonies has to say about it:

It’s getting to be reg­is­tra­tion time for Cal­i­for­nia’s pri­ma­ry point of gath­er­ing for lib­er­ty-mind­ed peo­ple. It’s called Libertopia. It is held in San Diego. This year it runs November 13–16. You can register here. I’ve been tapped once again to be the MC of the event, which means giving a number of talks, introducing speakers, leading nightly events, and otherwise keeping things on track and making sure that everything stays smart, creative, fun, and inspiring.

Libertopia is only one of what is probably a dozen of these large-scale gatherings around the country. What makes it unique? Well, there is the fact that San Diego is absolutely beautiful and the hotel where the event is held is just the right venue for the event. Also, most of the other events take place in the spring and summer whereas the weather in Southern California makes November a great time.

But these are not the unique selling points. For that I would list two critical features: the broadness of the intellectual culture that you will find here, and also its practical focus. These are points of unity amid the incredible diversity of attendees: intellectuals, business people, activists, entrepreneurs, professionals of all sorts, think tankers, eccentric experts on everything, and lots of very cool California people who do who knows what. It’s a happy and inclusive community.

On the broad­ness point, you will hear talks here and en­gage in dis­cus­sions that touch eve­ry as­pect of life, from ec­o­nom­ics to di­et and ex­er­cise to re­li­gion and spir­it­u­al­i­ty to science and technology. The range is really incredible, and, what’s more, everyone feels very comfortable as including them all as part of the general topic of human liberty.

For my part, I had some of the most stimulating conversations I’ve ever had at Libertopia. Whether we were discussing history, religion, war and peace, romance and relationships, or technology, you get the sense that nothing is ever off the table. It’s the ultimate non-stuffy event in this sense. Everyone is learning from each other. It’s very likely that you will consider ideas and possibilities that you never encountered before.

When I first attended the event, I hadn’t really observed this before, having previously seen libertarianism as having an exclusively political focus. While it’s true that this is primary and main driving force — and most people who attend consider themselves to be anarchists or minarchists — the theme of human liberty is actually a large one that touches on every aspect of life. If the command-and-control school of politics wrecks society by destroying the human spirit, the lesson surely applies in other aspects of life too.

Most of the lib­er­tar­i­ans who gath­er here long a­go dis­cov­ered this point that it took me man­y years to re­al­ize. Lib­er­ty has to mat­ter in our lives or it does­n’t re­al­ly mat­ter at all. In the end, there is not much any of us can do to accomplish genuine political change. But there are so many things we can do more successfully to live freer lives, and, by so doing, we make a gigantic contribution to freeing our world. It’s not a matter of dropping politics but rather finding the most effective ways forward to bring about change to the world.

As I type those words, I feel the presence of Leonard Read, founder of FEE, who makes this point a major theme of his life’s work. I’m now recalling that before he was founder of FEE, he was head of the Los Angeles Chamber of Commerce. He drank deeply of that Southern Californian libertarian spirit. That’s the spirit that survives and thrives here.

Another famous person whose views on the world were cultivated in this Southern California air was none other than Ayn Rand, who was the pioneer in discerning how the ideal of freedom pertained to our lives regardless of the political mess around us. Her passion was to show the world how to be free even in times when the political culture is hostile and dangerous.

What e­merged from this Read-Rand sen­si­bil­i­ty was a de­ter­mi­na­tion to make some­thing won­der­ful out of life as a mat­ter of prin­ci­ple while ref­us­ing to let the powers that be take a­way the es­sence of what makes us hu­man. Cultivating that sensibility is the primary contribution of Libertopia. It pervades every aspect of the gathering. It’s what makes it thoughtful, warm, friendly, intellectually stimulating, and ultimately productive for our lives.

Please consider joining me and many hundreds of others for a fun and groovy three days at Libertopia. It will lift your spirits, feed your mind, and inform your path life. Liberty really is about life. It is about your life. Come discover how and why at Libertopia.

Hope to see you there!