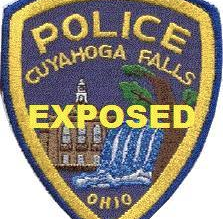 The content below comes to us from the folks involved with Cuyahoga Falls Police Exposed.

This week the Cuyahoga Falls Police hit an all time low!

On Thursday they posted on their Facebook page about an arrest they made of a local barber. After the arrest was made, a search warrant was conducted at the home of the person who was arrested. During that search warrant officers discovered a large deal of cash in the residents safe.

Now to the good part. Cuyahoga Falls Police officers and local media outlets are calling this find the largest drug bust in the city’s history. The only problem is no drugs were found. At least no mention of drugs have been made by anyone involved in the investigation.

Many of you know the man who has been seriously violated by the Cuyahoga Falls Police. He is a hard working business owner who works 7 days a week. He doesn’t drive fancy cars or live in a huge house. He runs a barber shop which is an all cash business.

This is nothing but an absolute abuse of power by the City of Cuyahoga Falls. They are already discussing how the city will receive 2/3 of the money they recovered and what they will purchase with it. This is not their money! This man has been stripped of everything he has worked his entire life for. All so they can buy new cruisers or a military vehicle to control and brainwash the public.

This is a total abuse of power and it must be stopped. It’s scary that officers can take our cars and money at any time just because they have a badge. A police state has never been more real!

Elsewhere in Ohio? Connect with the group nearby:

No permission is needed to share this post, or any content housed at CopBlock.org. Ideas have consequences – the more good ideas are shared the better we all are. Help fuel our efforts – donate Bitcoin: 1D6hdGKcFfzciJaMSLU6X1Tq69fcCsEh65
12k
SHARES
FacebookTwitterGoogleRedditTumblr
DiggLinkedinStumbleuponMailPrint