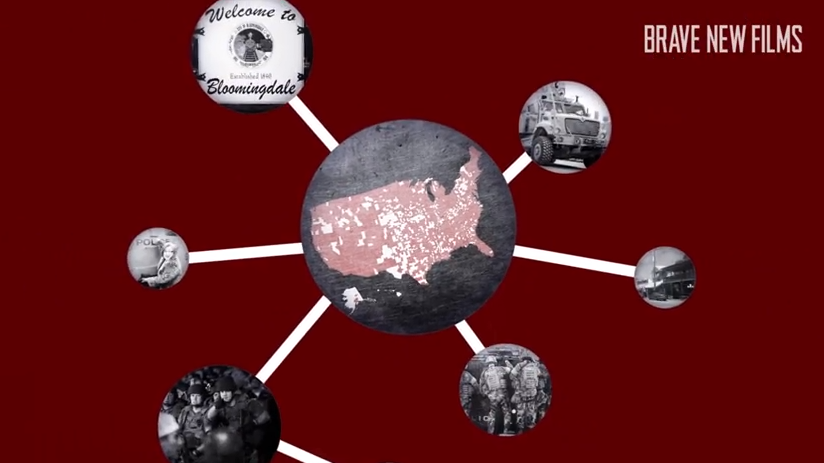 The information and video below were shared by Mike, who’s involved with Brave New Films.

Ever wonder why police look like soldiers? With the 1033 Programs, “Protect and Serve” Became “Search and Destroy” WATCH MORE: http://youtu.be/utjxA3GQF5A?list=PLQ9…
You can fight back. Join us: http://www.youtube.com/subscription_c…
SIGN THE PETITION: http://stoppolicemilitary.org

• Pentagon’s Excess Property Program (1033 Program) has supplied police departments across the country with more than $4.3 billion in gear since 1997. This includes $449 million in 2013.

• Military style police raids have increased in recent years, with one count putting the number at 80,000 such raids last year.

Police militarization grew out of our failed drug war. Does a town of 2,200 need a massive military tank? Why does the police department in Dundee Michigan need a MRAP (Mine-Resistant, Ambush-Protected vehicle)? They don’t. Military grade gear does not improve the safety and security in small towns. Defense Secretary Chuck Hagel must end the flow of military grade gear from the Pentagon to our local communities. It’s time for the militarizing of police to end.

We need to roll back programs 1033, 1122, and the National Defense Authorization Act. Sen. Claire McCaskill of Missouri will chair a subcommittee hearing tomorrow on Capitol Hill looking into police militarization.

You can fight back. Join us: http://www.youtube.com/subscription_c…

ABOUT BRAVE NEW FILMS
Robert Greenwald and Brave New Films are at the forefront of the fight to create a just America. Using new media and internet video campaigns, Brave New Films has created a quick-strike capability that informs the public, challenges corporate media with the truth, and motivates people to take action on social issues nationwide. Brave New Films’ investigative films have scrutinized the impact of U.S. drone strikes; the war on whistleblowers; and Wal Mart’s corporate practices. The company’s films have received more than 56 million views online. For more information, visit http://www.bravenewfilms.org/, watch videos at https://www.youtube.com/user/bravenew… , and follow them at https://twitter.com/bravenewfilms and Robert Greenwald at https://twitter.com/robertgreenwald .

No permission is needed to share this post, or any content housed at CopBlock.org. Ideas have consequences – the more good ideas are shared the better we all are. Help fuel our efforts – donate Bitcoin: 1D6hdGKcFfzciJaMSLU6X1Tq69fcCsEh65
2.3k
SHARES
FacebookTwitterGoogleRedditTumblr
DiggLinkedinStumbleuponMailPrint