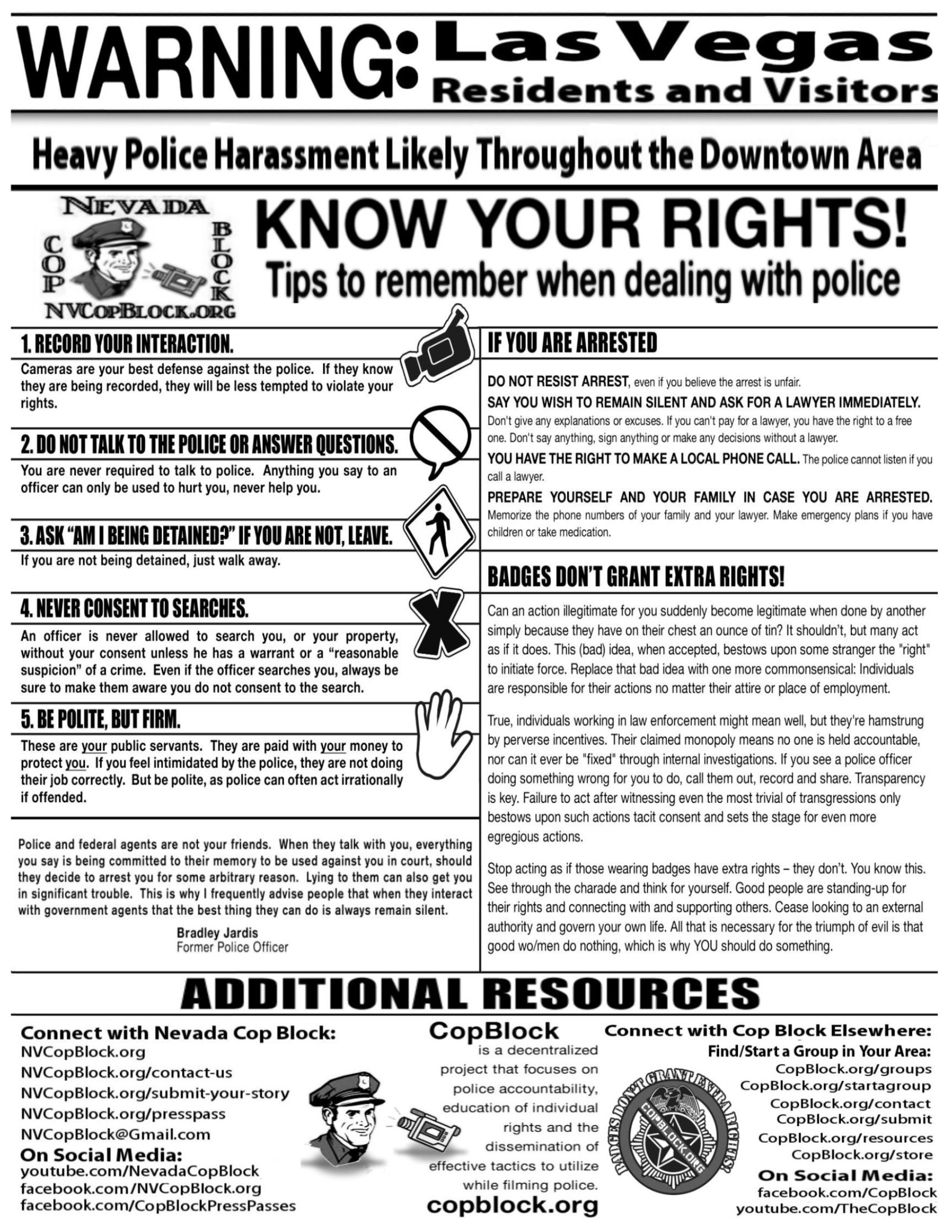 Note: This was written by Kelly W. Patterson and originally posted at the Nevada Cop Block site.

About a month ago, in early September, I did an interview with Joe Bartels of “8 News Now,” the local CBS affiliate in Las Vegas. Although the actual interview went really well, once it was broadcast it was fairly obvious that the intent of the piece was already set even before Joe talked to me.

That predetermined slant being the nonsense claim that Cop Block promotes violence against cops and has ties to the Millers, a married couple who recently murdered a couple of Las Vegas Metro cops, but had no actual ties or even any evidence that they so much as followed Cop Block. (Their Facebook pages, which were pretty widely viewed after the incident, contained a grand total of two shares from Cop Block going back three months.) In spite of the fact that I pointed out that neither I nor anyone I know had ever met or even heard of the Millers prior to the day they shot those cops and that in doing so they had actually made it more difficult for those of us advocating for accountability in peaceful ways, he chose to leave all that out and just do a very incomplete paraphrasing of my statements about them.

They also left out all of the discussion about downtown and the increase in harassment by cops there or the historically nonexistent accountability that is so prevalent in Las Vegas area police departments, which was presumably the reason for the interview in the first place. However, I got nothing but positive feedback from it and several people came down to First Friday while other Nevada Cop Block members and I were handing out flyers and actually asked for one, stating that they saw the interview. Plus, the headline of the text version was pretty accurate (“‘Cop Block’ advocates for rights when dealing with officers“). It’s also rather funny to hear all of them making sure that they enunciate properly to make sure they didn’t slip up and say something else when they said “Cop Block.”

Beyond that, that little spinning flyer graphic they made is obviously going to be the opening of all my videos from here on out. Also, as the title of the post states, Metro decided they didn’t want to respond to any of my statements (they held the broadcast back a day in order to talk with a Metro spokesperson), but they did state that they agreed with everything on the flyer, which would presumably include the advice not to speak to cops and to film them. The other thing about this interview that made me rather happy is that it was prompted by someone placing one of our downtown “know your rights” flyers on their news van one day while they were at lunch.

I actually asked everyone that I thought might be out flyering that day and none of them had put it there. Therefore, someone apparently downloaded the file of the flyer that is available here at Nevada Cop Block, printed it off, and went out flyering on their own. I think it is awesome that people are taking advantage of that resource and that people I don’t even actually know are out there spreading the word to protect people from the harassment that has become so commonplace in downtown Las Vegas.

Finally, they also interviewed Stephen Stubbs, a local attorney that does free monthly “Know Your Rights” seminars for Las Vegas area residents, and he confirmed that the flyers contained “sound legal advice.” You may remember Stephen Stubbs from having been arrested for refusing to leave the area after one of his clients had asked for a lawyer during questioning by the LVMPD Gang Unit. He also represents the man who was beaten by Metro cops in a bar downtown because they didn’t think he was walking fast enough.

‘Cop Block’ advocates for rights when dealing… by Copwatch_World-News

Excerpts from the interview:

‘Cop Block’ advocates for rights when dealing with officers

LAS VEGAS — A group critical of police is warning downtown visitors of what they’re calling police harassment. The group known as ‘Cop Block’ said it feels that police are overstepping their authority, so they want people to know their rights.

Cop Block is a nationwide movement, and their main goal is to be an advocate for individual rights, so the group likes to hand out flyers with a series of suggestions on how to handle interactions with police authorities…

The group said it’s handing out these flyers because of an increase in run-ins with police and the alleged harassment people see downtown.

“That flyer is basically a ‘know your rights’ flyer. It’s meant to educate people on what their rights are,” Kelly Patterson, a member of the Nevada chapter of Cop Block said.

Patterson said there’s a systemic problem that exists between police and the public.

“I’m advocating for them to be accountable; for them to do reasonable investigations when things appear questionable,” Patterson said…

We reached out to Metro Police, but they didn’t have anyone available to talk about the alleged harassment, or the flyers being handed out downtown.”

A spokesperson did tell us that the department was aware of the flyers and they agree with the information on them. The flyers five suggestions for people to take in consideration when they come into contact with officers consist of:

We caught up with Stephen Stubbs, a local attorney, and he said that’s sound legal advice.