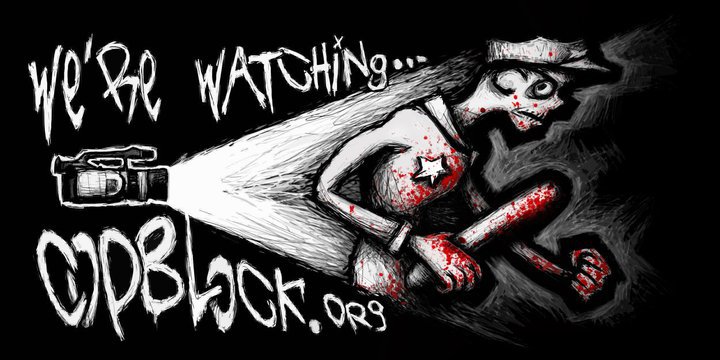 In the 29 years I’ve been alive, I’ve had some pretty wild police encounters. Yet, I think the Pittsburgh CopBlock team may have me beat. Not only are they being harassed by the police, both founders of Pittsburgh CopBlock have been arrested in retaliation, in my opinion, to their CopBlock activities, but it seems the media has launched an attack against them as well.

The article below was written by Larissa Dudiewicz and posted on the Sewickley Patch. I did email Larissa and she said we can talk when she writes an update on the story next month. Until then I’ve decided to add my two cents into her article (in block quotes).

An Ambridge man known for confronting and videorecording area law enforcement is facing charges of defiant trespass after a harassment incident at Magisterial District Judge Robert Ford’s office in Leetsdale.

According to a criminal complaint filed by Leetsdale Police Chief James Santucci, Anthony Bruno, 27, of Park Road went to the court office about 3:35 p.m. Aug. 4 to ask about a payment plan involving a traffic citation.

When Bruno learned that he would have to make a $25 monthly payment, he became “verbally combative” and told office personnel he would pay only $10 a month, the chief said in the complaint.

Bruno then began videotaping the court staff, saying he wanted it on tape that he must pay $25 per month.

Let’s stop right there. So let me get this straight, Bruno “known for confronting and video recording area law enforcement” (also known as transparency and/or accountability to some) was charged with defiant trespass while making court ordered payment plans for a fine? How does this work? How does one trespass on public property? How does one trespass when court ordered, if you believe you have to listen to such demands, to make arrangements to pay a (unjust) fine?

Larissa goes on to say that Bruno became “verbally combative” after being told he had to pay $25 a month, instead of what he knows he can afford, $10/month. According to Bruno, “the woman (at the Magisterial Office)” told me I had to give $25 a month and that was a state law.” Bruno couldn’t believe his ears, a state employee telling him what he can and cannot afford, so he turned on his camera to get the woman’s lies (or state’s aggression) on the record.

Pretty silly thus far if you ask me…. let’s see what else Larissa had to say or if she simply quotes the police reports the rest of the way.

Bruno belongs to the small activist organization pittsburghcopblock.org, an offshoot of the national CopBlock.org. The local group, which Bruno, Craig Glasser and several others operate, has created a YouTube channel dedicated to trailing the police as they respond to incidents.

Close Larissa, but not so much. I highly doubt Bruno, Craig and other Pittsburgh CopBlockers merely want to “trail” police officers around town. Yet, even if they did, what’s the harm in that? Making sure men with unlimited powers to arrest, use force and cage people are held accountable? What’s more likely, going by their videos, is that Pittsburgh CopBlock films public officials when interacting with them – which seems to be more often since they started their CopBlock group.

Santucci (pictured left)said court staff asked Bruno numerous times to stop taping and offered a payment-determination hearing with the judge. Bruno continued to tape and harass the staff and was asked multiple times to leave, according to the report.

Santucci said Bruno was also warned that police were called. He left when police officers from the Leet Township and Sewickley Police departments responded. A preliminary hearing is scheduled for October in Magisterial District Judge Mary Murray’s office in Coraopolis.

I’ve tried to contact James Santucci – Leetsdale, PA Chief of police (724.266.1397) – but my calls went unreturned as of the time of this publication. Seems he’s only interested in talking with people who refrain from questioning their authority.

Though I’m still interested in asking Santucci about defiant trespassing on public property and the fact that Bruno had “official” business there. Also, it’s unclear why Bruno wasn’t arrested that day but charged several days later? Did it take Santucci that long to find a law he could pin on Bruno?

Also, it doesn’t sound like Santucci is familiar with recent court rulings pertaining to filming of Public officials (not just police). For example, the Glik Ruling recently declared that there is a first amendment right (Santucci – the first amendment is in the constitution, you know, the one you swore an oath to) to record any public official conducting their duties. Even a Illinois judge recently stuck down an eavesdropping law stating it was unconstitutional (again, that silly little thing you swore an oath to uphold).

So why was Bruno asked to leave due to filming? The answer will disturb you more when you see the next quote by Santucci.

The Leetsdale District Court office video was uploaded Aug. 24 and has garnered about 1,835 views since then. The group also has filmed Edgeworth, Leet, Ambridge and Moon Township police; an off-duty Coraopolis officer on a shopping trip; and Beaver County detectives at the county courthouse.

Bruno faces more charges in Beaver County, including defiant trespass and harassment for recording at a business.

According to the organization’s blog, the group hopes to prevent and document what it describes as instances of Pittsburgh-area police officers abusing their authority. Hundreds of videos have been posted.

The district court incident wasn’t the first run-in Leetsdale Police have had with CopBlock. The group recorded officers last month at a license and sobriety checkpoint on Route 65.

Leetsdale police Officer Mike Slawianowski said Bruno stood filming from a nearby parking lot and asked the officers questions, “trying to provoke” them. Then he told the officers he planned to drive through the checkpoint, but Slawianowski said he refused to show his driver’s license, incorrectly citing a section of the state vehicle code that did not pertain to the circumstances. He was pulled off to the side, eventually showed his license and left, police said.

Santucci said the men have a right under the First Amendment to record police.

So the Leetsdale police think that asking police officers questions at a checkpoint is “provoking” them? Aren’t they violating the 4th amendment rights of hundreds of motorist in order to conduct this checkpoint? What about their actions? They’re seeking people to charge with crimes (mostly ones without a victim), they’re creating criminals and furthering the heavy burden this country’s prison system puts on folks financially.

“If you’re in a public place, you have no expectation of privacy while in uniform,” Santucci said. “Under the law, they can video, but they’re not allowed to stop police doing rightful duties.”

Santucci might be getting it, or maybe he’s really confused, this exact quote is why Bruno shouldn’t have been charged with trespassing by your office to begin with. See Santucci is 100% correct about the filming of police officers while on duty, yet, what he doesn’t realize is that also applies to ALL public officials. And the courthouses, judges offices and any other building that is funded by theft (taxation) is a public space as well.

This also brings up a great question. When are the people allowed to stop a police officer from doing their duties? Take the checkpoint for example. That’s a clear violation of the your 4th amendment rights yet if anyone were to physically stop the police, they would be arrested or even killed. Though Santucci calls what Bruno did “provoking” he thinks it’s his “rightful duty” to stop people, at random – in the land of the free – to check of papers (ID) and to see if you’ve been drinking. Makes alot of sense doesn’t it? What happens when his bosses tell him that it’s his “rightful duty” to shoot dissenters? Will Santucci feel the same way abou this actions?

Local police have mixed feelings about the activists confronting and videotaping them.

“They’re within their rights to videotape things,” said Sewickley Police Chief James Ersher. “I would hope it wouldn’t interfere with police operations or put anybody’s safety in jeopardy.”

Again, posing the same question as above. What can a person do when they disagree with the police – read CopBlock’s post “When Should You Shoot A Cop” by Larken Rose for more discussion on this. I’d like one of the LEO’s quoted to answer that, yet, no one returns my calls?

“I understand their plight, but they’re going about it the wrong way,” Santucci said, adding, “You get more bees with honey than you do with vinegar.”

Ah, well said Santucci. Have you ever considered taking your own advice?

Some police officers believe the group has an underlying motive that has nothing to do with protecting rights or reporting police abuse.

“They’re two misguided kids with too much time on their hands,” he said.

Damn, we’ve been busted (again). Bill Hanlon, who also dodged all my phone calls, thinks CopBlock is about legalizing drugs and promoting anarchy. Ok? So what? Yes, alot of people at CopBlock.org believe in self ownership. Bill, that’s when a person feels they own their body, and what they put in it, regardless of what your bosses (politicos) say and dispit your desire to raid the homes of people who have such “radical” ideas.

Speaking of misguided. How do grown men, since Criag and Bruno are “kids,” think they’re protecting and serving people while violating the very oath they swore to uphold. Do you really think it’s “your job” to tell people what they can or cannot put in their bodies? Do you think you’re keeping people safe by setting up checkpoints and stopping innocent people at random?

On and I think you should look in the mirror and ask yourself, “how many people are paying my salary that want to voluntarily?” I bet Craig, Bruno and I can respond by saying everyone who pays us for our work does so voluntarily. You and the gang of blue aren’t so lucky, more and more people are fed up with paying your salaries and fuck ups.

Slawianowski said the two are a joke and their videos only show that police are doing their jobs.

They may be a joke in your mind Slawianowski, but who works for a company that is TRILLIONS of dollars in debt? How well will you be “doing your job” when the boss goes broke(r)? What will you do when people no longer respect the badge and hate the government for milking the public dry? How long can you go on doing your jobs without asking questions? Who will be the joke then?

“Both of them just have a personal ax to grind with law enforcement,” he said. “They’ve shown no corruption – just them trying to antagonize us.”

Note to self, Mr. Slawianoski, you antagonize people all day long. Keep demanding money from people for victimless crimes, keep seeking those federally funded grants, more police officers and toys to keep the public in check. Keep it up… the ax will only get bigger.

As an example, Slawianowski said, the first portion of video recorded at the judge’s office has been edited out before posting, leaving just the part when police arrive to check out the situation.

“They’re portraying it as something it isn’t,” Slawianowski said. “They’re not filming us doing our duties, just on a coffee break, which we’re allowed. It’s nonsense.”

Wasn’t there video surveillance in the Judge’s building? Where is that video officer? Did you gather it as evidence? Will you be releasing it? Bruno has publicly stated he wasn’t recording at that time and that he only started to record when he was threatened by the clerk. He’s even asked for the video and was told there was a “power outage” – go figure.