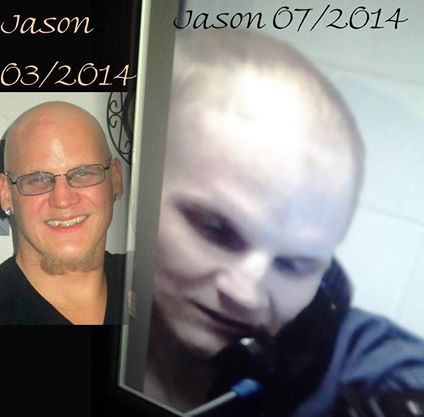 The information below was shared by Barbara Sprouse

March 04 2014 – Dotty’s Casino Ranch & Vegas Drive. Three Metro Officers (Darrin Kaplan #13421, Christian Belt #13694 & Chrisnar Sok #14069) went into Dotty’s looking for a couple who allegedly tried to pass off a fake twenty at the 7-11 across the street. But not seeing the other person (Erin Breshears) they left for a few and returned to make bee line to JASON A MAHE.

Jason Mahe was sitting at a machine playing poker when the officers walked up to him and asked him if he goes by the name of ”Lucky”. Mahe looked up from his game and told them “No my name is Jason Mahe, what’s this about?” One of the officers told him he fit the description of a man who tried to pass off a fake twenty across the street and then asked him to step outside so they could “clear this up”. Jason stood up and one of the officers was in front of him and two behind him and this is also how they stayed when outside the casino.

Once outside the standard questions were asked and Jason answered them all when he was asked for his ID he replied he did not have it on him. When asked if he had any drugs or weapons on his person, Jason Mahe told the officers “I do not have any drugs no sir but I do have an unloaded pellet gun in my pocket here” as Jason reached into his pocket to pull it out and hand it to them it fell on the ground.

The next thing Jason knows he is being shot by all three officers. He was struck nine times – seven of those were in his BACK.

As his body jerked and twisted with each bullet that was hitting him he quickly fell to the ground in massive pain and shock from just happened. Jason over heard one of the officers say “OH SHIT NOW WHAT?”.

As Jason lay there in a massive pool of his own blood in critical condition, Jason thought he is going to die and for what telling the truth. As he was rushed to UMC Hospital on Charleston Blvd in Las Vegas, NV, he flat lined twice (he was told this later while still in hospital).

March 05 2014 – 8am near Rainbow and Smoke Ranch. I had just gotten up poured a cup of coffee was online reading headlines on Las Vegas Sun, the local paper, when I read the following headline: “Man shot by Metro Police officers at Dotty’s was a fugitive.” I dropped my cup of coffee and fell to knees in my living room and screamed “OH DEAR GOD NO” I knew who it was without reading anymore.

As I tried to tell the lady who answered the phone what had happened as I cried so hard she could barely understand me, she did the best she could to calm me down over the phone and she put me on hold (seemed like forever).

When she came back online she told me no he is not there but he is in UMC Hospital in critical condition and because of the privacy laws they could not tell me anything. I thanked her for her help and called back to the hospital where I was lied to once again – though my son who was there in critical condition and was still on the operating table fighting for his life – I was told NO HE IS NOT HERE.

So I got a ride to hospital and was told by staff and by officers that Jason was not there. They threatened me with jail if I did not calm down. I left and started calling every person at the Las Vegas Metro Police Department, explaining what had happened and I wanted information on my son and his condition. I was transfered to people who did not pick up so I was forced to leave a message, I kept calling back and even was hung up on.

Then I reached a Lt. Richards (who was the rudest person I have ever talked to in my life) and I told him what had happened and that I wanted info on my son Jason Mahe and I also asked him why didn’t anyone call me or come and tell me what had happened. The reply I was given from Lt. Richards was this: “Your son is a bad guy and we do not have to tell you anything about him or his condition – go get a court order.”

I did get an order from the court signed by judge William Kephart. But Las Vegas Metro Police still denied me the right to see my son who had been shot nine times, seven in his back, who was on life support and very much on his death bed. And no one who denied me entry got into any trouble.

Jason Mahe was in UMC hospital for over 18 weeks, where he unfortunately contracted several strains of methicillin-resistant Staphylococcus aureus plus bacterial meningitis, on top of his major health problems from being shot. Due to Jason’s being shot and him being on life support for so long and not only one but several strains of staph plus bacterial meningitis he is DYING!

Doctors at UMC Hospital told Jason that they have done all they can do they have given him every known treatment for these and for him to prepare himself for a very short life. While Jason was in the hospital several times he requested to make his one phone call and each time he was denied to make any calls, not even to me, his mother.

Some weeks after the shooting Detective Mitchell Dosch #7907 and his partner Detective Clifford Mogg#5096, investigators from homicide unit went to UMC Hospital to “interview” Jason. When the Detectives arrived at UMC Hospital Jason Mahe had just been given a very large dose of Dilaudid (hydromorphone hydrochloride) a heavy duty narcotic, and it was even noted in Jason’s medical chart that the Detectives were advised NOT TO “INTERVIEW” Jason right now due to the pain medication he was just given. But of course that advise was ignored. Jason Mahe recalls requesting a lawyer present while they were “interviewing” him but his request was refused. Jason does not recall much of that “interview” that day.

Finally Jason was taken to Clark County Detention Center (330 South Casino Center Blvd Las Vegas Nv 89101) and he finally got to make his phone calls that he had requested so many times prior to make and the first one was to me, it was so wonderful to hear his voice but at the same time it was heartbreaking due to the news of his health he was telling about.

The jail had him for six weeks or so in a unit that they claim is for “medical”but according to Jason its more like the “hole”. Two large heavy steal doors before you even get inside of Jason’s unit. There is no visits from family or friends while you are in there and no phone contact. There is no other contact with other inmates very little contact from the “GUARDS “there.

Now when Jason was first put into the medical unit he was alone of course but now he is in a wheelchair, due to his femur bone being shattered in several places and his arm which is damaged beyond repair just hangs there. At this time Jason still weighed in between 160 lbs and 180 lbs, (he is 6ft. 6in.) but Jason was very week and could not transfer himself from the wheelchair to the bed or even go to the restroom without help from one of the guards there. Jason did not get to take a shower for well over a month due to the fact the medical unit has no rails or bars or special showers for inmates to use (yes the medical unit).

While he was in the medical unit Jason had to go have several operations on his leg where the infection was the worst. Yet that did not address the situation so only after his and my complaining, when his thigh was 36” around and as red as sunburned skin, he was taken back to UMC Hospital for yet another operation.

Finally 22 weeks after Jason was shot I finally got to see him finally I fell apart he looked terrible he had lost so much weight he did not even look like my son – “OMG what have they done!?” I thought.

Jason was moved to another unit so he could talk with other inmates, use the phone and take showers but then on Sept.8th 2014 he had some sort of episode and they put him back into the medical unit.  Jason told me that on that day a corrections officer by the name of SKOBIE punched him in his face and choked him out to the point another corrections officer had to pull him off.

Jason is in a wheelchair and now weighs only 103 lbs yes – ONE HUNDRED AND THREE POUNDS! He is ill and he is dying the jail nor anyone else cares, he has lost over 147 lbs since March.

No permission is needed to share this post or any content housed at CopBlock.org. The more good ideas are shared the better we all are. Fuel our efforts with donate Bitcoin: 1D6hdGKcFfzciJaMSLU6X1Tq69fcCsEh65
8.6k
SHARES
FacebookTwitterGoogleRedditTumblr
DiggLinkedinStumbleuponMailPrint