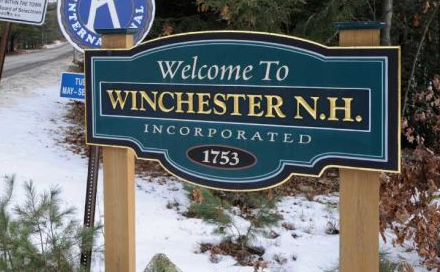 Micah Purinton shared the information below.

The officer showed up while I was not home and told my wife if I did not have the money by 3pm that Friday he was coming back with bracelets and that the warrant was all but signed by the justice of the peace. So, I came home and spoke with my wife and explained the law and printed it out. She took the law print out and went down to the police department and when she asked why they think they can show up without a warrant and threaten to arrest me in front of my children.

Long story short, I waited all day for Winchester’s finest to show but they never did. I left for work on Sunday and my wife called me and said she noticed the police have been going by a lot more then normal. I told her to take a walk and see if they approach her again so she went to Rite Aide with my daughter and her friend. On the way back her friend notices the same officer, who pulled up to them. He stops her and claims that in her hand is a beer when it’s clearly a Pepsi. Then he questions my wife – asking what’s in the bag in her hand. My wife pulled out the aero chamber she just picked up from the Rite Aide for my son and shows him what it is. He then asks if she had anything in her purse and she handed him the purse and says, “Would you like to look?”

The police in Winchester – aside from a few lone men – are very corrupt and are bullying me and my family very bad to the point now we want to move from New Hampshire. After being in the army for nine years I moved here to build a safe home for my family thinking it would be a nice change coming from Massachusetts.

It was a quiet and country setting which we liked, but now it has come to the point where we don’t even want to leave the house anymore because as soon as we are seen we are followed watched and threatened and questioned.

They picked up my nine-year-old daughter for walking down the street and they questioned her about what me and her mother do for a living, who lives at my home, and asking who drives this car and that car… This is out of control they had no right to talk to her or approach her.

They bullied another man so bad he hung himself. It is out of control – they state they don’t need a reason to pull you over anymore or to arrest you. Please guys you need to approach this matter before another person gets pushed too far. The people of Winchester are scared of their own public safety. Guys, let’s raise up and fight back!

No permission is needed to share this post, or any content housed at CopBlock.org. Ideas have consequences – the more good ideas are shared the better we all are. Help fuel our efforts – donate Bitcoin: 1D6hdGKcFfzciJaMSLU6X1Tq69fcCsEh65
5.1k
SHARES
FacebookTwitterGoogleRedditTumblr
DiggLinkedinStumbleuponMailPrint
EPN