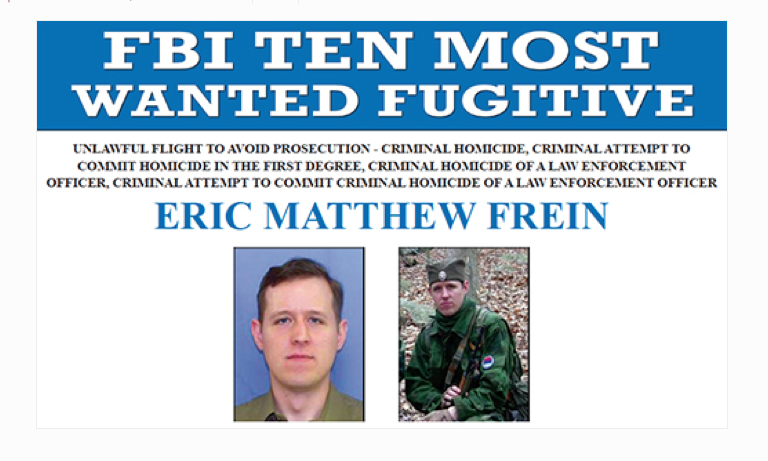 The content below was written by Scott McPherson and originally posted to Patch.com.

Eric Frein Slips Through Police Fingers: Police are acting like an occupying army in northeast Pennsylvania. It isn’t working

According to Pennsylvania State Police, six weeks ago Eric Frein ambushed two state troopers outside a Pike County police barracks, killing one officer and severely wounding another. Frein is then said to have fled into the surrounding woods, putting to use his self-taught “survivalist” training to escape capture.

State Police responded immediately, massing hundreds of officers into a 5-square mile radius, employing armored vehicles, night vision equipment, and even local hunters in an attempt to capture the alleged gunman, believed to be hiding in the dense woodlands of the Poconos Mountains.

No expense has been spared in this search. The manhunt has become so expensive – now running into the “millions of dollars” – that lawmakers in the state are becoming a little uneasy.

Nor have area residents been spared. Those at home when the manhunt began were put on “lock down,” while others have been blocked from returning to their homes. Many have expressed understandable frustration over the way they’ve been treated.

Schools have been closed, police officers line the roads and man numerous roadblocks, and generally act as an occupying army in the area. Even Halloween events have been put on hold.

“We will find you,” was the message from Lt. Col. George Bivens, on September 26.

But six weeks into the search, police still don’t have their man.

A report on the case Saturday from Fox News has revealed an interesting new development. A woman claims to have spotted Frein “with his face caked in mud and carrying a rifle” near his old high school in the town of Swiftwater. Police say it is a credible sighting. “Based on the sighting, Bivens said it appears Frein has moved about six miles south. He said the search area is being expanded…”

Which means that despite all police efforts, Frein slipped through their cordon.

The search for Eric Frein – and the behavior of law enforcement officials – is reminiscent of events in Boston last year, when two homemade bombs exploded near the finish line of the Boston Marathon, killing three people and injuring over 260 others. After that incident, the entire city was put under virtual martial law, with thousands of police officers and numerous armored vehicles roaming the streets in a massive search for the suspects, pointing assault weapons at city residents, ordering them into their homes, closing businesses, and shutting down the public transportation system.

Only after the lock down was rescinded – and police left the area — was suspected bomber Dzhokhar Tsarnaev spotted by a private citizen, who immediately alerted authorities to his whereabouts.

There may be a lesson in this for Pennsylvania authorities. Massing a small army to search for one man, even a dangerous criminal, may not be as effective a measure as backing off and letting the public’s eyes and ears do your work for you.

While acting like thugs and treating the local population like pawns, to be ordered about and cower in compliance, must be somewhat gratifying to people who make their living lording it over others, and who are no doubt frustrated and afraid that a member of the civilian population has targeted them for attack, it doesn’t appear to be the most efficacious approach.

This would certainly never be the reaction to the murder of a mere mundane, which happens far, far more often in this country than attacks on police.

The vast majority of crimes are solved not by the police response, but by tips from the public.

Millions of dollars, hundreds of officers, roadblocks, lock downs, and police-state tactics turned up nothing for six weeks. Eric Frein has made a mockery of law enforcement efforts to apprehend him. But just as in Boston, one alert citizen changed the game.

Maybe the police should stop behaving like soldiers in a war zone. People are growing increasingly tired of that. No permission is needed to share this post, or any content housed at CopBlock.org. Ideas have consequences – the more good ideas are shared the better we all are. Help fuel our efforts – donate Bitcoin: 1D6hdGKcFfzciJaMSLU6X1Tq69fcCsEh65
12.7k
SHARES
FacebookTwitterGoogleRedditTumblr
DiggLinkedinStumbleuponMailPrint