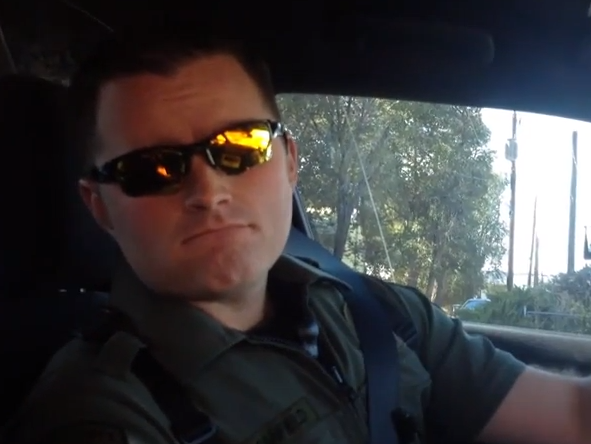 This content was shared by multiple people who are appreciative of Gavin Seim’s actions, which will likely empower others to stand for their rights and call out double standards. See for yourself.

Editors Note: Gavin Seim was the winner of the 2013 Checkpoint Contest co-sponsored by CheckpointUSA.com, CopBlock.org, and LRN.com

In Washington we have unmarked police vehicles impersonating citizens. If you think it’s not a serious issue, try asking those that have been raped or lost loves ones because of unmarked cars. It’s already illegal in WA for public vehicles to be unmarked, unless designated for “special undercover or confidential investigative purposes.” I’ll post the legal details and debunk the myths at the bottom. It’s also worth noting that this was not the first the Grant County Sheriff’s office heard about this. I called about a month ago and filed an official report addressing my concern with unmarked cars in the area.

Tolerating lawlessness does not fix anything and at this stage of our decline, neither does writing a letter. I get called every possible name for taking up the liberty conversation. Sadly many Americans hate America and hate liberty. But as in my courthouse incident, standing firm and principled works. If I’m dealing with a disrespectful tyrant, I put them in their place. It’s a matter of safety to never allow a bully to feel they can intimidate you. We can stand up them. — Thankfully that was not a problem today because Deputy Canfield handled this well. I informed him of the law and and he now has the opportunity to fix it. — I want officers to treat people with respect and I in turn do the same. Disrespectful public servants should never be tolerated, respectful ones should be commended.

Ordinary looking unmarked police cars slink around and entrap, so they can write folks up (read tax) for petty faults. That’s not protecting. As my brother Blake says, “serve and protect, not harass and collect.” — But this is also a major safety issue. Unmarked vehicles are a ripe opportunity for confusion in a citizens reaction and for criminals to impersonate lawful authority to get people to stop.