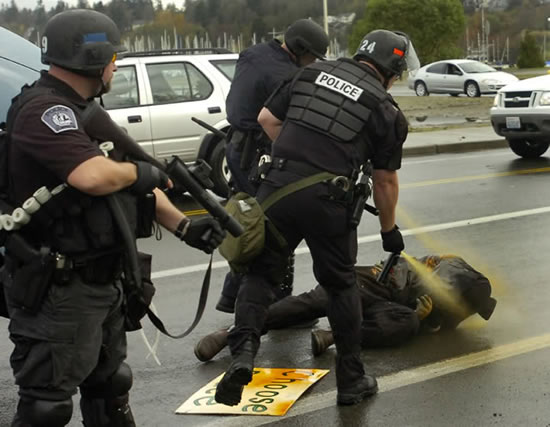 The National Day of Protest began 19 years ago, but recently it has been taking on a whole new degree of importance. With the shootings of unarmed citizens like Mike Brown, 18, Dillon Taylor, 20 and John Crawford, 22, in the past year, many activists are saying that this “National Day of Protest to Stop Police Brutality, Repression and the Criminalization of a Generation” is one that no one should sit out.

Find Assembly Points and Events in Your Area >> http://www.october22.org/#assembly

The Day of Protest was initiated by a diverse coalition of organizations and individuals who came together out of concern that the peoples’ resistance to Police Brutality needed to be taken to a higher level nationwide.

According to the organizers, “We continue to see young black men, including John Crawford, killed by law enforcement on virtually a daily basis. Now is an opportunity to step forward and have your voice heard.”

The National Day of Protest is Wednesday, October 22nd and will take place in cities all over the nation. It aims to “bring forward a powerful, visible, national protest against police brutality and the criminalization of a generation.”

Furthermore, it seeks to educate the public about “the state’s repressive program.”

Those most directly under the gun of Police Brutality are to be highlighted by the protest, but the organizers also emphasize that this is an issue which reaches into all parts of the society. They are thus calling on all to stand in the fight against this official brutality.

Find out if there is a local protest in your area, or contact the organizers to get something going at their official website for the Day of Protest! Then help us SPREAD THE WORD to everyone you know who believes something has gone seriously wrong with policing in America.

No permission is needed to share this post, or any content housed at CopBlock.org. Ideas have consequences – the more good ideas are shared the better we all are. Help fuel our efforts – donate Bitcoin: 1D6hdGKcFfzciJaMSLU6X1Tq69fcCsEh65
6k
SHARES
FacebookTwitterGoogleRedditTumblr
DiggLinkedinStumbleuponMailPrint