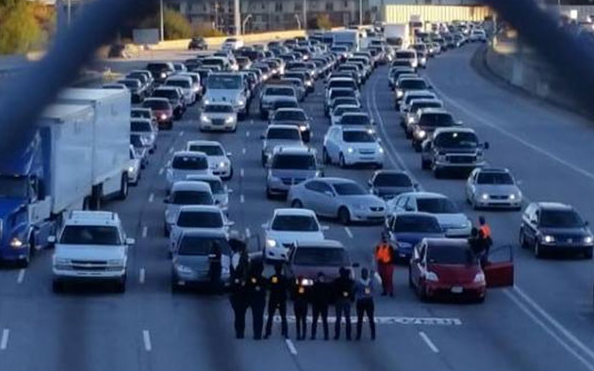 This content comes to us from our friends at CounterCurrentNews.com, and was originally posted October 24, 2014. It was authored by Jackson Marciana.

Why aren’t we hearing about all these acts of civil disobedience and protest on the National Day of Protest to Stop Police Brutality, Repression and the Criminalization of a Generation?

It looks like it’s up to EACH OF US to keep each other INFORMED, because the mainstream, corporate media doesn’t want to cover issues and stories that highlight the BROKEN SYSTEM!

Activists in Atlanta took this to heart when they decided that police brutality couldn’t, wouldn’t and shouldn’t be something that Georgians could turn a blind eye to any longer.

Protesters from the Georgian activist organization “Rise Up” formed a human chain across the I-75/I-85 merged highway running through Atlanta, bringing traffic to a standstill, and – for a time – all eyes on the issue of police brutality which the activists sought to highlight.

Rise Up is an organization “dedicated to empowering Georgians through grassroots organizing, leadership development, direct action, and civic engagement.”

The Day of Protest was initiated by a diverse coalition of organizations and individuals who came together out of concern that the peoples’ resistance to Police Brutality needed to be taken to a higher level nationwide.

According to the organizers, “We continue to see young black men, including John Crawford, killed by law enforcement on virtually a daily basis. Now is an opportunity to step forward and have your voice heard.”

The National Day of Protest took place all over the United States Wednesday, October 22nd. Annually, the protest aims to “bring forward a powerful, visible, national protest against police brutality and the criminalization of a generation.”

Furthermore, it seeks to educate the public about “the state’s repressive program.” Those most directly under the gun of Police Brutality are highlighted by the protest each year, but the organizers also emphasize that this is an issue which reaches into all parts of the society. They are thus calling on all to stand in the fight against this official brutality, not just one day a year, but every day and every place where police brutality exists.

Police Accountability Groups Based in Georgia: