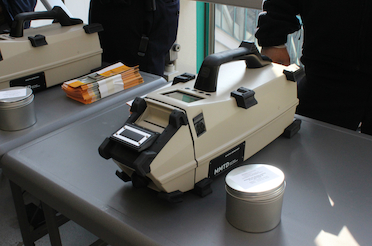 Alexandra Naples shared the content below about actions done on behalf of security theater that could negatively impact millions of rail riders in and around Chicagoland.

Chicago Police employees will soon be swabbing random passangers’ bags for explosives, yet the police have been cited in stating that there is no credible information that would cause them to implementing these procedures. As a Chicago transit user, I feel this is a clear and concise violation of peoples’ privacy. I also feel it has the potential to create menace enough to keep people who are experiencing homelessness off the train by being a present and intimidating danger.

As Tracy Swartz noted in Chicago police to check CTA passengers for explosives, this latest iteration of the expanding police state in Chicago is being funded by stolen coin provided by a DC-based gang in the form of a grant. But be clear, not all responsibility lies with those actors, as implementation of the program is due to those in Chicago who wear “Chicago police” costumes, who are responsible for stopping random people and employing the device.

As if to underscore the hubris of those involved in the deployment of this gadget, Nancy Lipman, the “commander” of the Chicago police outfit’s transportation, said, “It’s going to take 20 or 30 seconds of a commuters’ time, while we know the commuters’ time is precious but we think their safety is priceless.”

Shouldn’t each individual commuter have the option of deciding what risks they are comfortable taking?

If some self-proclaimed rulers wearing badges believes it is justified to prevent your entry into your  own residence for 30-minutes while they sweep your house under the guise of safety, should that too be allowed? If some purported “authorities” say it’s their “duty” to strip you and your family members down to ensure you are not carrying anything they deem “illicit” should that too be permitted?

At what point will you cease to obey tyrants? When will you stop funding them and granting them, and their bad ideas, legitimacy? You own yourself. Think for yourself.

As one commenter to Mauricio Pena‘s write-up, CTA to Randomly Screen Riders for Explosives, noted: No permission is needed to share this post or any content housed at CopBlock.org. We’re all better off the more good ideas are shared. Help fuel our efforts – donate Bitcoin: 1D6hdGKcFfzciJaMSLU6X1Tq69fcCsEh65
2k
SHARES
FacebookTwitterGoogleRedditTumblr
DiggLinkedinStumbleuponMailPrint