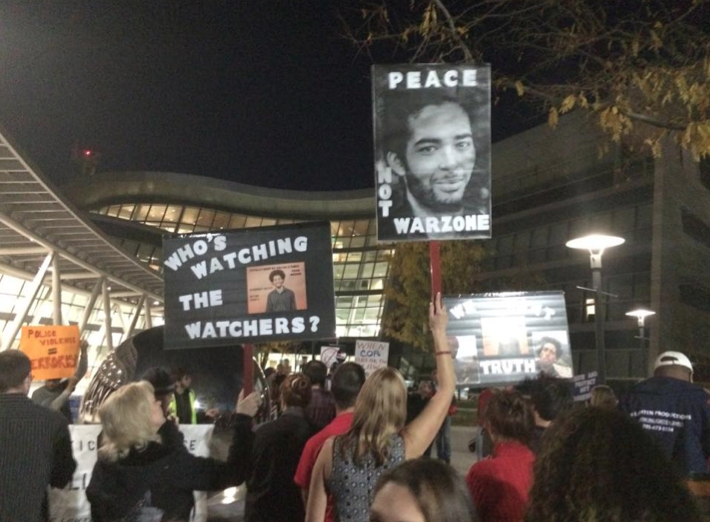 This content comes to us from our friends at CounterCurrentNews.com, where it was originally posted on October 23, 2014. The write-up is from Jackson Marciana and Moreh B.D.K., and the images and video are from Adrian Lambrinos.

Private citizens of Salt Lake City and surrounding areas recently took to the streets in the heart of downtown, demanding justice for victims of police brutality and killings. The protests took place yesterday against these unwarranted deaths, apparently focused on the killing of unarmed Dillon Taylor. The activists also highlighted the unnecessary use of lethal force against people like Darrien Hunt and many other victims.

When the Salt Lake City police in Utah killed Taylor, they claimed it was because he failed to respond to police commands. But the real reason why he “failed” to respond to their “commands” was not out of personal hatred for the police, nor as an act of defiance. He was not resisting police, nor had he been engaged in any criminal activity of any sort. Instead, he was just listening to music on his headphones. Taylor “failed to respond” because he simply couldn’t hear police yet, and was trying to turn down his music.

Watch the Dillon Taylor video and see for yourself (video).

This case in particular bears a strong resemblance to the shooting of John Crawford in Beavercreek, Ohio. Crawford, 22, was on the phone with the mother of his child when police shot him without asking a single question. Crawford was holding a replica air rifle in a Walmart that sold the rifle. He had picked it up off the shelf while continuing his phone call, before purchasing the replica toy.

Check out some of the raw video footage of the protests last night in Salt Lake City captured by Adrian Lambrinos:

The protestors in Salt Lake City have set up a Justice for Dillon Taylor Facebook page, which has received thousands of likes.

Editors Note: To address this pattern of unaccountability, one must realize that trying to “fix” an institution based on coercion is a waste of time and efforts. Instead, we must move away from the doublespeak, and the real accompanying harm, that says that certain people – those who purport to be “authorities” – have a “legal” right to steal and initiate violence, in order to protect. More at: CopBlock.org/Library

No permission is needed to share this post or any content housed at CopBlock.org. We’re all better off the more good ideas are shared. Help fuel our efforts – donate Bitcoin: 1D6hdGKcFfzciJaMSLU6X1Tq69fcCsEh65
3.2k
SHARES
FacebookTwitterGoogleRedditTumblr
DiggLinkedinStumbleuponMailPrint