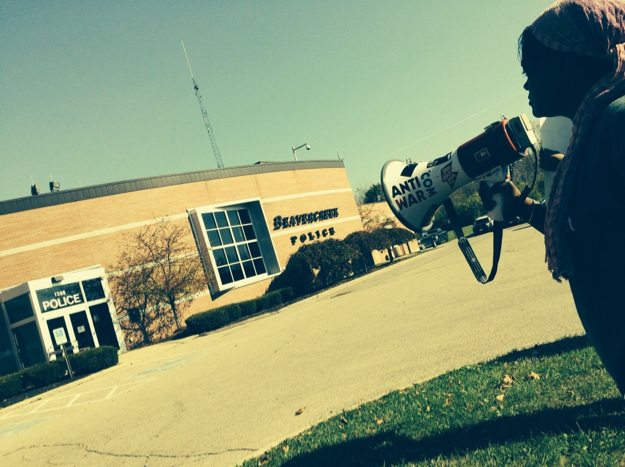 This content was shared by our friends at Counter Current News, where it was published on October 24, 2014. It was written by Jackson Marciana and Moreh B.D.K.

Saturday a huge three-part protest kicked off a news series of #OpJohnCrawford actions, demanding justice for the 22-year-old African American who was gunned down by Beavercreek Police Officer Sean Williams. The three-part action began with the Early Vote Block Party associated with the Ohio Student Association which has been central to many John Crawford actions. Shortly after that, several dozen activists took to the Walmart where John Crawford was shot and killed, chanting: “Walmart is no longer Walmart! Walmart’s a murder scene!” and “Watch the tape!”

Protesters were eventually asked by store security to take the protest to the sidewalk, off of store property. While this exchange was going on, dozens more were already on the sidewalks and medians of the street. The storefront protesters rejoined them, handing out flyers apparently produced and circulated by #Action4JohnCrawford and #OpJohnCrawford Anonymous “hacktivists.” From there, at around 2:30, the protest moved about four miles down the road to the Beavercreek Police Department, where activists from Cop Block, Ohio Student Association, Ohio Open Carry, the Hashlamah Project, and of course Anonymous let their voices be heard. OSA activists and others were already there to meet the larger group that joined them. One of the organizers of the day’s actions took to the bullhorn, leading chants outside of the Police Department, which Beavercreek officers have now decided to keep locked, after the three-day long occupation of the lobby by activists, earlier this month. From the Police Department, protesters returned to the major crossroads that lead to the tucked-away station.

From all corners of the street, Anonymous protesters, wearing the trademarked Guy Fawkes masks – many of them open carrying pistols as well – worked in conjunction with social justice activists from all backgrounds to pass out “WANTED” posters of Officer Sean Williams and the 911 caller Ronald Ritchie.

Organizers say that they are just getting started, with an all-day “Justice Fest” concert planned to raise awareness, educated and request donations for John Crawford’s family, and children.

Stay tuned, our reporters have their feet on the street in Beavercreek, Ferguson, and globally, reporting on what the mainstream, corporate media seems to want to help the police keep swept under the rug!

Protesters for #JohnCrawford say they are JUST GETTING STARTED!

Organizers say that they are just getting started, with an all-day “Justice Fest” concern planned to raise awareness, educated and request donations for John Crawford’s family, and children. SPREAD THE WORD to help us RAISE AWARENESS and bring the MAXIMUM people to this important MUSIC AND POLITICAL FEST!

Stay tuned, our reporters have their feet on the street in Beavercreek, Ferguson, and globally, reporting on what the mainstream, corporate media seems to want to help the police keep swept under the rug!

Editors Note: Be sure to check CounterCurrentNews.com (on Facebook, on Twitter) for more reports from the ground, and if you’re in Ohio, definitely connect and get involved with the group nearby to your location: