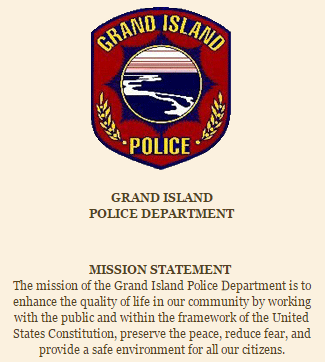 This post was submitted via the CopBlock.org Submission page by Anna Cure.

***Updated*** This post has been updated at the bottom of the original post to include a dash cam video Anna Cure submitted of three Grand Island PD police at the time of her arrest, as well as some additional details, concerning prior incidents involving area police.

In July I was charged with a DUI in Hall County. I was found in my car at 730am, right next to a heavily traveled road in Grand Island and an extremely busy parking lot, with my feet outside my car door, no jeans and no underwear either. It was called in as a welfare check at 730am. It took 3 police officers to walk around my car for almost 3 and a half minutes with me in that condition and talk with one another before ever knocking on my window to wake me up at all. I know this from the tape my lawyer finally received last week from the county attorney’s office. It’s on the tape. The officers never asked me how I got there at all, just asked me to put my pants on and get out of the car. Nobody bothered to ask anything at all. I even asked for my lawyer on more than one occasion loud and clear as day on the video. I was even told the second time by a police officer that I didn’t have the right to an attorney and they didn’t have to grant me one either. I invoked my Miranda rights at that very point and was granted nothing at all.

I was taken to the jail, booked and, while waiting for someone to come and get me, I was in so much pain because obviously something had happened the night before. I asked to see the nurse at the jail and even her and the morning guard who worked there said I should never have been taken to the jail, I should’ve been in the emergency room for the condition I was in. They even went so far as to tell me flat out that, as soon as I was bailed out, I did not need to shower whatsoever.  I was not to go home or anywhere else except the emergency room, that if they had the choice or the power they would’ve taken me in, but they weren’t allowed to.

Now, Hall County is a strict jail in many aspects, but it hurt so much to sit or lay on the concrete beds that they even allowed me to have one of the mats for a bed before the time they were handed out, and allowed me to make over 30 phone calls trying to find someone to come and get me. When I finally did get bailed out, at around 130am the next morning, the guard who walked me out even told me, my mother, and my sister that he wanted us to know that he wanted to go on record of saying he did not agree with how I was treated or the fact that I was not taken to the hospital before then and he would go on record for it because he even said if he’d worked during the day when I was originally brought in he would’ve taken me in.

After all of this, I did go to the emergency room and asked for a rape kit to be done because I didn’t remember anything from the night before except that I had asked two different people to come and get me and that I wanted to go home, and setting my beer down on a table at the bar and going to the bathroom and walking back from the bathroom to find my beer on the opposite end of the table and sitting all by itself and then nothing whats so ever except waking up in my car to cops knocking on my window. I walked into the emergency room around 2am. I even asked to be tested for GHB and they said it would’ve been too long since I’d have gotten it to even be tested at all for it, but they could do the rape kit to test for semen or anything like that. They sent a police officer to take the report and I told him everything that happened and he did take it, but when it came time for me to give them my clothes for the rape kit and so they could test my jeans especially for any DNA or anything they had me undress and place them on the floor, not in a bag or anything, just straight on the floor. The officer picked them up and carried them out, no bag, no nothing. They never even placed anything under me to try and catch any skin or anything that might have been there.

I sat and waited and waited for a sane nurse as they are the ones who are supposed to conduct a rape kit. I waited until 7am before I was told they couldn’t find an available sane nurse to do the exam. I was told to just go home and they would have one contact me on Monday morning and this was at 7am on Sunday morning!!! I was never contacted by them at all and when I contacted them on Monday afternoon I was told that someone would call me on Tuesday to go in. Tuesday came and went. On Wednesday, I went to the crisis center and was told it was too late to do anything, I had waited to long.

I did get to meet with an investigator from the police department to file an official report and here’s the real odd part. The investigator turned out to be the same police officer that was dispatched to the hospital about 5 years prior to this when my niece broke her arm playing in my sisters front yard. I had been there, so of course they had to take a statement from everyone there and make sure it was under normal type circumstances that she had broken her arm. It was the same officer that had contacted me on Facebook after the day my niece broke her arm and told me how pretty I was and how he wanted to get to know me. We did text back and forth for a few weeks until I decided he was creepy, because he wouldn’t stop texting me. So, I finally deleted him from my Facebook and changed my number.

Now, you can imagine how awkward this was especially when he even mentioned our “history” as he called it in our meeting over my sexual assault case. I do have the video of this also. I told him who I was around the night before my DUI and he told me he would look into it and see what he could find out. This was the Wednesday after my DUI. In July, the investigator went on maternity leave with his wife and was gone for 6 weeks. In all this time, they never so much as talked to any individual who was there that night at all, not a single one of them, period.

On October 1st, I began receiving Facebook messages from a guy and his girlfriend asking me why he was being investigated for a sexual assault against me, that’s how I found out they had finally talked to someone. Naturally, I called the investigator and asked how it was going with my case, you can imagine my shock at hearing he talked to one guy who had said yes we had sex, and that it was consensual, and that there was no more case to be had. They were satisfied with the fact that what the guy said was just so.

I was so incredibly frustrated that I did talk to the investigator and asked why, from the time I spoke to him to the time they contacted the one person that they did,  it took them 73 days, yes 73 days!! I even asked why, if he went on maternity leave, he didn’t give the case to another investigator? His reply was he didn’t feel it warranted that attention. Now, to me and to any normal person at all this would be infuriating to say the least. During our last meeting, I was told that it was partially my fault it took so long because I didn’t have screenshots or copies of messages from the one guy’s girlfriend asking me why he came home with scratches and bleeding. I report a sexual assault and get told its my own fault and they are the ones that sat for 73 days without doing anything!!!! It’s all on tape along with emails from the investigator stating that even after all of this my clothes from that night and my rape kit were never even sent in!! They never even so much as sent them in to be tested! They completely shoved it under the rug, they never even cared enough to send it in at all!!!

Someone somewhere has to listen to me please, please, please. This is all so wrong!. The Grand Island Police Department and the county attorney’s office are getting away with everything here, all led by the man who wants to become the new district judge. Someone has got to help me. What they did with my daughter and with me now has got to stop. If they’ve done it to one family, a mother and daughter both regarding sexual assault, what else are they doing and who else are they doing it to?? These three officers even took the special time to take pictures of me without my jeans or anything in my car before they ever tried to wake me up!!! It’s gross and wrong and shows just how misguided the police officers from that morning were!!

This won’t stop unless attention is brought to them.

This is the video from the welfare check incident. As can clearly be seen, along with the great care they showed, they wanted nothing more than a DUI:

I have video of me asking for my lawyer on both occasions in this incident. Also, Officer Arrends is the resources officer at my daughters elementary school!!! I have a daughter, who is 7 now, but was kidnapped and sexually assaulted by a cops step son in the same police department as in the video. And the story where a second set of DNA was found from the night she was taken and that was lost after they realized the second set of DNA and was never found again. And now this happens to me…this is wrong!!!!