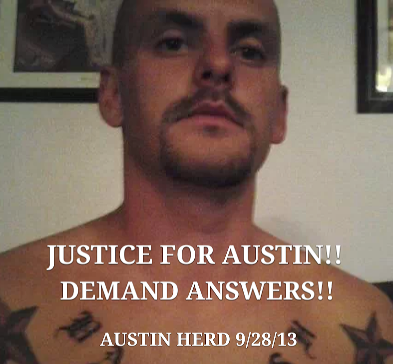 This post was received via the Cop Block Submission Page: http://www.copblock.org/submit

An officer with the OSP had been allegedly been assigned to a case that involved an individual who he knows in his personal life. The individual he allegedly knows has expressed to several people related to the victim in this case that said officer is “my very good friend”. The officer has shown him “reports” “a video from a Walt-Mart surveillance camera in Hood River” “along with a mountain of evidence”.

When the family of the victim, Austin Herd specifically asked this OSP officer face to face if this was true he very awkwardly denied knowing this individual. Stumbling on his words and making lame excuses for past encounters with this individual then exiting the room.

and read this media…

The 3rd passenger in the van told a completely different story immediately after, implicating the “girlfriend” as the instigator of the argument and the aggressor in the fight. Witch is consistent with the history Austin’s family, friends, and neighbors of the off and on couple witnessed many times in the past. This history was given to OSP officers along with several names and phone numbers to verify.

Austin’s family also gave the contact information for the friends house that was stopped at by the couple on their trip from Galveston Texas to Portland Oregon, at witch Austin was never seen. As far as Austin’s family knows none of these people have been contacted. Jesse Walters has also since vanished, and has never made attempt to contact the family of the man he allegedly saw murdered right in front of him. The “girlfriend” has stopped communicating with the family and hasn’t been seen since March of this year. Austin’s family would like to speak with Mr. Walters, if anyone knows his whereabouts please email us at rickmalonelives@gmail.com. To Jesse, if you see this please come forward and set the record straight.

OSP is calling this case an “accident” but 13 months later it remains open. Just 3 days after Austin’s death the Multnomah county medical examiners office submitted the information for the death certificate calling his death an accident. The investigation was still ongoing. Just 5 days after his death, he was cremated without even one family member seeing his body, in what the medical examiner herself called an unusual case.

Multiple other mistakes have been made by OSP and the medical examiner’s office that Austin’s family is very aware of and will not be silent about.

Our questions to the public right now are:

This is the opinion and recollection of events of Mr. Herd’s family, friends and supporters. For more information or questions please contact JUSTICE FOR AUSTIN!! At rickmalonelives@gmail.com