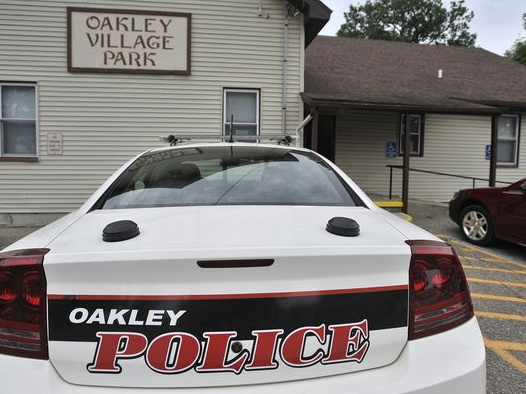 This content was written and shared by Matthew Nestle. It was published to Vocativ.com on October 23, 2014.

Kudos to Nestle for his investigatory reporting, which really underscores the harms that stem when some are thought to have more rights than others.

Want to Play Cop? This Town Will Sell You a Badge and a Gun Permit:
Doctors, lawyers—even a couple of NFL players—who don’t live anywhere near Oakley, Michigan, are reserve police officers there
by: Mathew Nestle

The village of Oakley is a tiny speck on a map of Michigan: It has one streetlight, one grain elevator, one church and a couple of bars. If one of its 300 residents gets as much as a DUI, it’s big news around town.

So it makes sense that Oakley relied on a single policeman for decades to protect and serve. He was more than capable of making the town’s half-dozen or so arrests for petty crimes every year all by himself. But in 2008, a new chief arrived in town (the old one had to step down after he was caught stalking a teenage girl), and he began staffing up.

The new chief, Robert Reznick, promptly added 12 full-time police officers, but he didn’t stop there. He also started hiring volunteer cops in droves, many of them friends of his. And it wasn’t just guys from the neighborhood, either. Among Oakley’s volunteer cops are lawyers and doctors—even a couple of NFL players—who don’t even live in town.

Here’s how the chief’s program works: The wanna-be officers pay about about $1,200 for a uniform, bullet-proof vest and gun, and some make additional donations to the police department. In return, they get a police badge and the right to carry their gun almost anywhere in the state, including places that people with normal gun permits can’t, like casinos, bars, stadiums and daycare centers.

There are many towns in the country where you can pay to play cop, but they’re particularly common in Michigan. In dozens of other cities and towns in the state, people who donate to a local political campaign get to appear in public wearing police uniforms and pack heat at Detroit Lions or Tigers games.

“There’s no way to put a number of these people, which is part of the larger problem,” says David LaMontaine, a deputy sheriff in Monroe County and president of the Deputy Sheriff’s Association of Michigan.

Reznick, who lives 25 minutes away and is also the police chief in nearby Waterloo Township, says his reservist program has raised lots of money for Oakley and made it possible to run the police department that he himself supersized. “I bring in thousands and thousands of dollars,” Reznick says. “Without the money from the police department, that town would not be running.”

One of Oakley’s reservists, sources tell Vocativ, is Michael S. Kent, a familiar face on infomercials for inventing the Lifestyle Lift, which promises cheaper and less invasive face-lifts. The company was at one point under investigation by the attorney general’s office in both New York and Florida for dozens of complaints by customers who say the surgery didn’t work. A lawyer for Kent, who has a vacation home in Michigan, declined to comment about the doctor’s Oakley ties.

Another guy who bought himself a badge and gun from Reznick is a white-shoe lawyer named Herschel Fink, who serves as the editorial counsel for The Detroit Free Press. Calls made to Fink’s office weren’t returned.

One of the two NFL players who have been able to pack heat with a concealed-pistol license is Jason Fox, an offensive guard who played for the Detroit Lions before being traded to the Miami Dolphins. It’s unclear if Fox forfeited his badge and gun privileges when he relocated to Miami.

Oakley’s police chief has gotten into some hot water recently over his pet program. The Michigan Commission on Law Enforcement Standards and the state’s attorney general are both looking into how Oakley is collecting and spending money for its auxiliary cop program. And the police department was effectively shut down last month after it was unable to get insurance because of the ongoing investigations. Now all of Oakley’s 911 calls are being fielded by state troopers and sheriff’s deputies in nearby counties, and there are no police patrols in town.

Chief Reznick says he’s not afraid of the probes. “Where is the violation of the law?” he asks. “Why would we be concerned with another agency looking at us?”

The problems for Reznick started several years ago when he decided to crack down on some of the boisterousness in the town’s annual motorcycle rally. He put an end to people getting on their bikes if they’d had a few drinks and barred women from going topless at the event.

His push to clean up the rally triggered lawsuits and countersuits between Reznick and the husband-and-wife Dennis and Shannon Bitterman, owners of the Family Tavern, the bar where the rally was held. Things quickly got nasty: Among the claims in the bar owners’ suit was one accusing Reznick of propositioning one of the barmaids. Reznick says that never happened. To get back at the chief for taking some of the life out of their motorcycle rally, the bar owners demanded that he make public the names of all of the reservists. (The bar owners say Oakley has 100 of them; the police chief insists it’s closer to 50.) Reznick refused, arguing that they have a right to remain “anonymous donors.”

It got even wackier from there. A local reporter in September filed a Freedom of Information Act request to force Reznick’s hand, and in a desperate attempt to head off the request last week, Reznick even invoked the Muslim extremist group ISIS. He argued that releasing the names of the reservists could put them at risk of attacks by the terrorist group. “Whether or not that’s far-fetched doesn’t matter,” Reznick says, talking with us over the phone this week. “Why would you want to put them in harm’s way?”

As the battle rages on, there are two separate bills in the Michigan legislature that would give the state greater control over auxiliary cop programs like the one in Oakley.

LaMontaine, the president of the Deputy Sheriffs Association of Michigan, says it’s high time that the state did something to rein in the volunteer officers. “These people drop four or five grand and dress up to look like police. I have a problem with that.” More disturbing, LaMontaine says, is that the reservists are going on drug raids and driving cruisers outfitted with data terminals in them. “In some places these reservists are allowed access to the law enforcement information network, where they can run your license plate and find out where you live and look at your driving record,” LaMontaine says. “That’s happening.”

Reznick says he tried to find people locally who would serve as reservists, but he couldn’t—and that’s when he put out the call to friends and friends of friends in Detroit and other parts of the state. What’s more, he says, it’s not like these guys aren’t earning their privileges. To be an Oakley reservist, you have to pledge eight hours of service a month, log 40 hours of training and show up at some meetings.