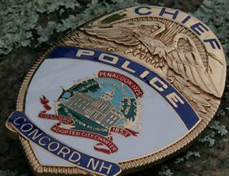 The content below was shared by a gent who described his less-than-satisfactory interaction with a couple Concord (NH) police employees as “typical behavior of local police around here.” Clearly the issue at hand was not too significant – no immediacy or threat of loss of life, yet Brad Crane chose to have a not too service-oriented disposition. Perhaps the introduction of a camera to the situation would have netted a better response?

On 11/10/14, I had called police due to a vehicle left on my property. The vehicle clearly had been dragged across the road, but it was nothing to do with me. I found the vehicle in that condition and had no intentions on moving it. I had driven past the incident on my way to a local welding shop, and was called by Ofc. White.

Ofc. White took the note I left for the woman out of the vehicle and called me up. I informed him that I was occupied and could not be at the scene and he informed me that “they weren’t going to wait around all day” and that “we need you to be here” and I again stated I would be unavailable except via telephone. Grudgingly, He remained fairly cordial, whereas Ofc. Crane was not so much.

Editors Note: Concord, a town of 42,000 that is not at all violent, last year attracted a lot of attention as the self-proclaimed protectors worked to bring a militarized vehicle into their arsenal: http://www.copblock.org/?s=concord

Ofc. Crane informed me that he “knew my vehicle” which is strange, as I do believe he pulled me over for having a headlight out two years ago. A little scary to think that cops remember every mundane interaction, despite botching them daily. He informed me that he would “really hate” to have someone lie to him, and I explained that the vehicle was there when I saw it first, and I had nothing to do with moving it and I intended not to continue arguing. Shut him up.

When asked where the property owner was and I stated “in the shower” he had just said “Oh that’s fine, we will wait” – figures that the cops have no respect for the time or private lives of civilians. I do feel bad for the woman who was trespassing, I am sure she faced even more scrutiny than we did, though we were entitled to none being the landowner reporting an abandoned vehicle.