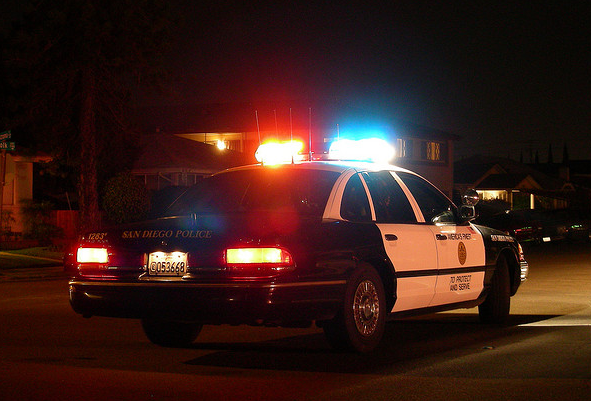 The content below was shared by a woman who’s home was invaded by two men wearing San Diego Police Department badges.

These 2 individuals came into my home with no permission or probable cause on the 10th of November 2014 at around 9:30 pm. They received a tip from neighbors about a woman screaming. When they had arrived at my home, there was only quiet and no probable cause existed to enter into my home. My husband and I were sleeping in bed. They intruded into my living room through opening my unlocked front door which was shut closed. Police may only enter a home without a warrant under “exigent circumstances” where there is a reasonable belief that there is an immediate need to protect their lives or the lives of others.

After they were inside, my husband and I came into the living room with shock. They claimed they received phone calls from neighbors. A neighbor’s tip may justify an investigation, but the court has held that, alone, it will rarely establish the level of suspicion to justify a search (United States v. Davis).

I can understand they were attempting to ensure some woman’s safety based on phone calls, but once they investigated (from outside) that nothing illegal had occurred at my residence, they should have left and not entered my home. There was no probable cause to enter. I asked them to leave repeatedly. They refused. In addition, Officer David Cupples was also gruff and grabbed my shirt on my backside in my own living room as I was asking him to leave. This was very unnecessary force on my person.

I do not think this behavior is acceptable and makes me lose a feeling of security by the San Diego Police Department. I encourage that the officers be trained and respect of the law. The San Diego Police department victimized me by neglecting my rights after a supposed call that was intended to protect me.

Police Accountability Groups in San Diego and Elsewhere in Cali: