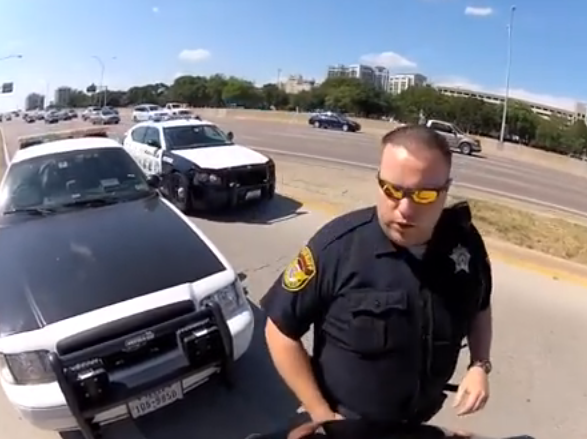 Catfish shared the content below – an update to an incident many of us are aware of – a demanding, lying, and outright thuggish James Westbrook, who wears a Dallas Co. Sheriff’s Department badge, toward a motorcyclist who had not harmed person or property.

Sheriffs deputy pulls over sport-bike rider, telling him he wants his helmet camera to use as evidence against other riders in the area since they may have violated traffic laws.

The rider refuses to give the deputy any of his belongings, hands his license and registration over, and waits as instructed. Upon the deputy’s return with a police deputy in tow, he is placed under arrest for “having a partially covered license plate”, he is then slammed to the hood of the patrol car by both deputy thugs while being handcuffed, his helmet ripped from his head, and shoved violently into the backseat while the sheriffs deputy slams the car door shut several times in a rage telling the non-combative rider/victim to “Relax, and calm down”.

The rider’s license plate is clearly visible, his rights are violated, he is slammed and shoved around, and illegally arrested.

The outcome is the sheriffs deputy being suspended for 30 days, a $1million law suet, tax payers paying the bill, and one more video in an ocean of videos proving that law enforcement agencies are an organized criminal gang of thugs and halfwits.

This is a raw video. The highlights of this video sections can be found here:

On Memorial Day Weekend, motorcycle rider Chris Moore was arrested by Dallas Deputy Sheriff James Westbrook. The arrest was part of crackdown against sport bike riders. Moore says Westbrook made up a charge in order to gain access to the video camera mounted on his helmet.

As Robert Wilonsky wrote at DallasNews.com of the exchange between Moore and Westbrook:

“The reason you’re being pulled over is because I’m going to take your camera, and we’re going to use it as evidence in the crimes that have been committed by other bikers,” Westbrook told him.

Moore, who said he wasn’t with the other bikers, responded: What crimes?

Eventually Westbrook came up with one, accusing Moore of having a partially obscured license plate. “That was indeed a strange charge for [Westbrook] to make,” says the suit, “considering that before he stopped [Moore], he had radioed his police dispatcher telling the dispatcher the license plate number of [Moore’s] vehicle which means the license plate was obviously not obstructed.”

Editors Note: Back in 2012 after I learned of this incident I called the Dallas County Sheriff’s Department to inquire about Westbrook’s actions. I left a VM but, despite claims of serving others, never heard back from anyone. Such is the “customer service” from those in a coercive monopoly. That post was followed up with another noting Westbrook’s suspension, but this latest information, about the lawsuit, is new. Too bad others in Dallas County may be on the hook for the actions of one person. It seems clear to me – and hopefully this incident will cause others to see as well – that as Westbrook acted, he alone should bear the responsibility.