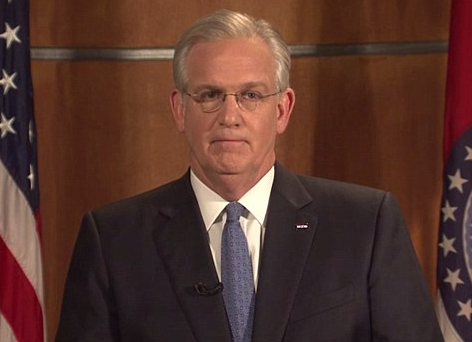 Craig Bergman shared the text below, which was signed by Jay Nixon – a man in Missouri who, under the guise of protecting the rights of others, called for the centralization of armed criminals (men and women who subsist solely via coercion) and his henchmen to introduce to the scene more who are similarly motivated.

WHEREAS, the City of Ferguson and the St. Louis region have experienced periods of unrest over the past three months; and

WHEREAS, the United States Department of Justice and St. Louis County authorities are conducting separate criminal investigations into the facts surrounding the death of Michael Brown; and

WHEREAS, the United States Department of Justice and St. Louis County authorities could soon announce the findings of their independent criminal investigations; and

WHEREAS, regardless of the outcomes of the federal and state criminal investigations, there is the possibility of expanded unrest; and

WHEREAS, the State of Missouri will be prepared to appropriately respond to any reaction to these announcements; and

WHEREAS, our citizens have the right to peacefully assemble and protest and the State of Missouri is committed to protecting those rights; and

WHEREAS, our citizens and businesses must be protected from violence and damage; and

WHEREAS, an invocation of the provisions of Sections 44.010 through 44.130, RSMo, is appropriate to ensure the safety and welfare of our citizens.

NOW, THEREFORE, I, JEREMIAH W. (JAY) NIXON, GOVERNOR OF THE STATE OF MISSOURI, by virtue of the authority vested in me by the Constitution and Laws of the State of Missouri, including Sections 44.010 through 44.130, RSMo, do hereby declare a State of Emergency exists in the State of Missouri.

I further order that the St. Louis County Police Department shall have command and operational control over security in the City of Ferguson relating to areas of protests, acts of civil disobedience and conduct otherwise arising from such activities.

I further order, pursuant to Section 41.480, RSMo, the Adjutant General of the State of Missouri, or his designee, to forthwith call and order into active service such portions of the organized militia as he deems necessary to protect life and property and assist civilian authorities and it is further directed that the Adjutant General or his designee, and through him, the commanding officer of any unit or other organization of such organized militia so called into active service take such action and employ such equipment as may be necessary to carry out requests processed through the Missouri State Highway Patrol and ordered by the Governor of the state to protect life and property and support civilian authorities.

This Order shall expire in thirty days unless extended in whole or in part by subsequent Executive Order.

IN WITNESS WHEREOF, I have hereunto set my hand and caused to be affixed the Great Seal of the State of Missouri, in the City of Jefferson, on this 17th day of November, 2014. Editors Note: There is no shortage of content from Ferguson that shows that those who have escalated situations, like Darren Wilson, the killer of Michael Brown, wear badges and claim to “protect and serve.” It seems clear who they, and Nixon are trying to protect – the statist quo. Fortunately, many are realizing just who are the aggressors and choosing not to grant them legitimacy. Some are training others on how to effectively film the police and are setting up streaming networks to ensure the truth of what unfolds gets out.

Those in or near Ferguson are bolded