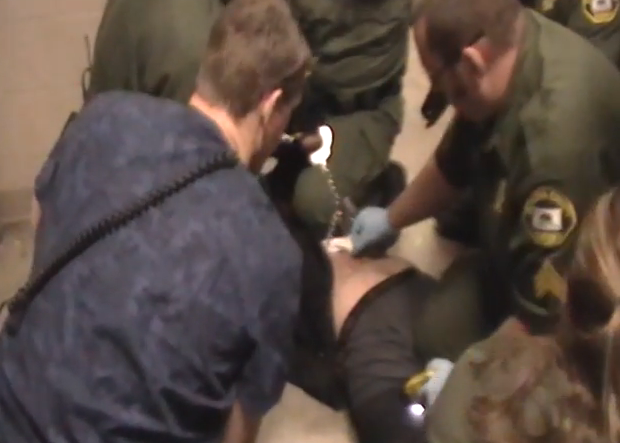 This content was shared by the brother of the gent – Esa Wroth – depicted in the video below, who noted, “My brother Esa Wroth was beaten and tased 22 times while he was at the Sonoma County jail in Santa Rosa ca 95472… Please put it on your website” to help make it known to more people.

This video shows the 28-minute beating of a young man being booked at the Sonoma County Main Adult Detention Facility. A pack of Sonoma County correctional deputies punch, knee, kick a handcuffed individual on the floor while wrenching his arms behind his back and stepping on him. The individual is tased twenty times, mostly in the small of his back. Following the beating, the inmate cannot be booked at the jail due to his injuries, and is transported by ambulance to the hospital. As the paramedics are loading his body into the back of the ambulance, the correctional deputies can be heard laughing. One claps an EMT on the back and laughs, “Merry Christmas.”

In a write-up from PressDemocrat.com, by Paul Payne noted:

Esa Wroth was wasted. He doesn’t dispute that.

But the 28-year-old Forestville man says he didn’t deserve what happened last year when he was arrested in Sonoma County on drunken-driving charges.

While he was being booked into the jail, the solar company consultant says, correctional deputies slammed him to the ground for no good reason. They punched and kicked him and shot him 20 times with electric stun guns.

The incident was captured in part in a 29-minute video that Wroth’s lawyer said is an alarming example of police brutality. It will be played next month to jurors when Wroth is tried on suspicion of assaulting a correctional deputy, resisting arrest and driving while intoxicated.

Jail officials said the level of force was appropriate given Wroth’s aggressive behavior when he was receiving a routine medical check upon entry to the jail.