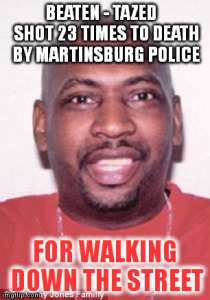 By THE FULL COURT PRESS & Virginia Cop Block:
THINGS YOU SHOULD KNOW

Wayne A. Jones was walking down the street beside the sidewalk at 11:30pm on March 3, 2013. An Officer Lehman lurked behind him in his patrol unit watching Wayne as he was walking. As Wayne made a wide turn around a parked car, he immediately turned in towards the curb and continued walking. The video depicts Wayne stopping at an intersection and then crossing the street and ultimately stopping when the Officer pulled his vehicle over and exited.

Help the Estate of Wayne A. Jones hold these Cops Responsible!

A consensual encounter ensued where Wayne attempted to articulate where he was going and why he was not walking on the sidewalk. Lehman immediately wanted to turn the encounter into a warrantless search and seizure by making several requests and asking Wayne “Where are you going?” and “Do you have any weapons on you?” We know now that Wayne had a pair of scissors in his back pocket because of the Medical Examiner Report. Wayne responded “What is a weapon?”

At this point, one could only surmise that he wanted to know, from the officer, if a pair of scissors was considered a weapon; Regardless, we will never find out because immediately what started out as consensual was escalated to detainment and ultimately a murder. Wayne refused to be detained and asked the Officer “What did I do to you?” and “What do you want?” Over and over – He asked the question. Lehman never said Wayne was under arrest, he never accused him of a crime yet he continued to demand Wayne to put his hands on the vehicle. Wayne Jones refused and was subsequently tazed twice as backup officers arrived on the scene.

A chase ensued and Wayne ran onto the public library steps where the Officers chased him. Again Wayne exclaimed “What did I do to you?” What did I do to you?” With no answer, Wayne was punched in the side of the head, put into an illegal choke hold and thrown on the ground where a total of (5) officers placed Wayne on his stomach – beat him over and over, tazed him another two times while calling him a motherfucker and kicking him. Instead of cuffing Wayne, they continued to beat him and – someone yelled that he saw a knife[sic]; yet in the Police reports, some officers said that they didn’t see a knife and others couldnt agree on what size the knife was. Furthermore – miraculously, multiple knives turned up on the scene after the fact and to date no knife has been physically produced.

At a point after the officers stated that they saw a knife – each officer, in unison, slowly backed away from Wayne, who lay motionless on his stomach after being horrifically brutalized. As an Officer Neely backed away, he instantaneously fired his weapon into the head of Wayne Jones and the other (4) officers followed suit. Totaling twenty-three shots, every bullet went into Wayne Jones body from the (5) officers. The Police Report clearly stated that Wayne was 5’9 and weighed 130lbs yet (5) officers who probably weighed 900-1000lbs could not subdue one 130lb individual without filling him full of holes equivalent to Swiss Cheese.

Stand Against Police State Tyrrany!
In the reports – each officer made a scripted statement that included “knife”, “fear”, and “noncompliance” summarizing that they felt in fear of their lives; however – the video tells a much different story. In fact, in Officer Staub’s video at around 23:30 he specifically stated that “He wouldn’t fucking do nothing so we all shot him” Additionally, Staub was the officer that was purportedly stabbed by the “phantom-throwdown” knife that multiplied into two knives underneath Wayne’s body after he was killed. Four different officers made materially false statements about the existence, location and the fact that they altered the crime scene and moved the knives[sic] which were never found to have any fingerprints, dna or other forensic evidence that would conclude that Wayne, in fact, possessed a knife or stabbed an officer. No knife was ever produced.

Several observations after watching all of the videos, make one wonder if they are even authentic, nevermind that the West Virginia State Police has already gone on the record and stated, after it was obvious that much of the audio had been doctored, deleted or otherwise maligned – that they had, in fact, made alterations to the video/audio which was released nearly (6) months after the murder. None of the timestamps on any of the dashcams are synched and most notably, non of the cruisers are ever facing a position which would shed any light on the actual incident despite it was 11:30pm and proper training and protocol is to position the vehicle’s headlights on the incident for maximum lighting.

The Martinsburg District Attorney had a Special Grand Jury convened to hear the evidence against these (5) officers and just like Michael Brown, the Special Grand Jury refused to indict. The family of Wayne Jones, immediately retained counsel and sued the City of Martinsburg and its police officers who were involved in this crime. Please help us fight for your Rights and mine!

Ironically – as a result of some legal incompetence; the attorney representing the Estate of Wayne Jones , at the very least, constructively threw them under the bus by failing to file documents, integral to the case, in a timely fashion(“1” day late). In and of itself, these types of situations are not fatal and the Federal Courts won’t throw out such a high profile and emotionally charged case based on a minor technicality, but in this case – the US District Court Judge Gina H Groh made the decision to grant a summary judgment to the City and the police officers and dismiss the Estate’s lawsuit with prejudice, in effect, thoroughly abusing her discretion and failing to allow the lawsuit to move forward.

It appeared that it was over for the family – their brother Wayne was dead, their rights had been disenfranchised in the Federal Court System, and it appeared like there would be no day in court where a full and fair hearing would be had on the merits of this case of Excessive Force by death and Wrongful Death.

After the Judge ruled against the Estate, attorney Sherman Lambert, withdrew himself from the case and for nearly three weeks, the Estate searched for the right legal counsel to represent them. With little to no success, the Estate created a package to send out to prospective attorneys. For nearly another week, they made calls and pitched Wayne Jones and the wide ramifications that this case has on our country, blacks, elderly, and the homeless. In the wake of the Ferguson outcry by Citizens, Wayne Jones, though murdered on March 13, 2013, his blood is still crying out for Justice. Please support Wayne’s Cause!

After speaking to Bobby Jones(Estate Administrator), its crystal clear that neither of these men are primarily after money – and the Jones family desires that these (5) men be held accountable for the death of their brother and the City of Martinsburg to apologize, and immediately start retraining its Police Department so that this never “ever” happens again.

As an activist, investigative journalist and a reasonable man, please agree and partner with me and the Estate of Wayne Jones. Refuse to allow Wayne A. Jones’ horrendous last ten minutes of his life and his senseless death become nothing more than a Constitutional Anomaly and a legal afterthought.

As a nation, we can not run from this oppression. We must stand up to these policies and resist this oppression – peacefully and in the spirit of due process and Constitutional redress. In the wake of Michael Brown, obviously, a POLICE STATE pattern is prevalent and free citizens are being disallowed to choose to ‘walk away’ from encounters and are being forcefully detained to the point of death, if they refuse to succumb to unconstitutional demands on their freedom and liberty to travel and be free from warrantless searches and seizures.

As citizens, we have inalienable rights to travel and walk freely, unfettered or harassed. Ill trained and unqualified officers must be the focus of these political stands. Cities must be responsible and held accountable for their officers, which in this case, at minimum rise to the level of a public nuisance in a community based policing program. Face it – at best, Wayne was guilty of an administrative violation, if at all. He had a good reason for not walking on the sidewalk – Officer Lehman refused to allow him to articulate it.

As it stands today – The Estate of Wayne Jones has retained legal counsel last week for the purpose of its Appeal to the Fourth Circuit Court of Appeals. This case will be argued in mid January and the Fourth Circuit will rule – some time afterward. We are confident that that Wayne’s case will be reversed based on clear rules in the Federal Rules of Civil Procedure and controlling case precedent.

Presently, the Estate is asking for help with the costs to litigate this case and bring justice to Wayne Jones and his family. Costs for experts, filing, depositions and travel are substantial, therefore a Crowdfunding campaign has been created to move this honorable cause forward. Help Prepare for this Legal Battle!

All donations go directly into the Fiduciary Account for the Legal Fund of the Estate of Wayne Jones managed by The Virginia Law Group, Rocco Deleonardis, 11480 Sunset Hills Blvd. Reston Virginia 20190-5265 (703)338-2434 – roccodeleonardis@yahoo.com

By: Rand Cadmus
(540)395-3539
randcadmus@yahoo.com
Please consider sharing this article with your media contacts as this case continues
the pressure must continue as well.
This article originally published on: The Full Court Press

The Daily Mail UK also wrote about this.