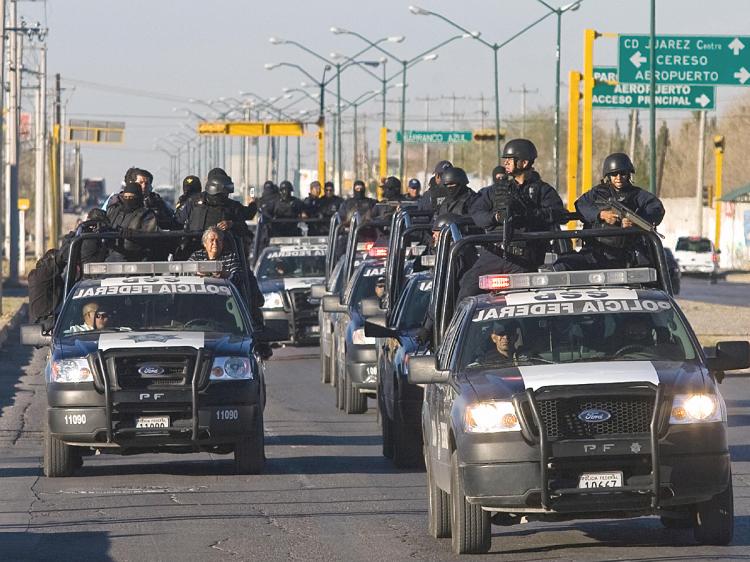 I currently live in Culiacan, Sinaloa, Mexico (close to Mazatlan). If you haven’t been keeping up, Sinaloa is the home to the Sinaloa Cartel which is considered the most powerful drug cartel in Mexico. A few years ago, the President of Mexico decided to go to war with the cartels. They stepped up policing, they sent in the soldiers for domestic patrols, etc. Needless to say, law enforcement activity in Mexico, and especially in the cartel areas is quite pervasive. Before I get in to the comparison, I need to give you a little background information on the hierarchy of Mexican police.

There are basically three types of cops in Mexico.

The one thing that all the cops and soldiers have in common is that they are corrupt to one degree or another. Many are bought and paid for by the cartels. In some cases, the entire police force is in the pocket of the cartel. Just as I said, about American police, in my last article any “good cop” down here doesn’t last long. Whenever you get stopped by the cops down here, it’s expected that you will offer them a bribe of some sort to get out of the ticket. And of course, if they catch you with weapons or drugs, the bribe has to be much higher. Generally speaking though, you can offer $200 to $500 pesos (about $14 to $37 dollars) and they’ll either accept it or write you a ticket. To the best of my knowledge, no one gets arrested for attempted bribery. As a gringo living in Mexico, I would almost certainly go to jail for carrying a gun, but I refuse to be completely unarmed so I carry a sturdy frame lock knife. I do expect one of these days to either turn it over to the cops or have to bribe them to keep it, but I’m reasonably certain I wouldn’t go to jail for it; it’s worth the risk.
Being a cop in Mexico is far more dangerous than being a cop in the United States. That being the case, you would think that it would lead the cops to being very abusive and prone to excessive force. So far, from everything I’ve seen in my time here, the police are more polite and tend to abuse people far less than in the U.S. I have had a number of encounters with the police. I had an accident on the Federal highway (toll road) and I suppose they could have taken me to jail for not having a Mexican driver license but they didn’t. I’ve also been stopped for speeding a few times. In one case, I talked my way out of a ticket because there were no posted speed limit signs anywhere. Also, I think the cop was just confused on what to do with me since I only had a California driver license. I didn’t offer a bribe but I was prepared to. In another case, I was stopped by the Metro Police for running a red light, but they don’t issue tickets. I think they just wanted to make sure I wasn’t a “suspicious” person. I actually had a really good reason for running the red and they let me go without calling the Metro Police. And one time I actually did get a ticket despite an attempt at bribery. All of my other encounters with police have been at random road blocks which occur regularly.

So far, in all of my encounters with the police, I have been treated with respect. In fact, on a couple of occasions, a truly shocking thing happened; the cop offered a handshake when he walked up to the car! That would be a serious violation of police safety protocols in the US and it would never happen except in a small town where the police know everyone. Imagine getting pulled over by a Los Angeles cop and when he walks up to your car, he shakes your hand and says, “good afternoon,” it would be surreal. Here in a country where there is no presumption of innocence (the law changed on that but the practice hasn’t), no jury trial and police statements are taken as gospel by the judges, it seems likely that there would be a high degree of abuse of power; that doesn’t seem to be the case though. I can speculate on several reasons for this. First, there is the fact that Mexico is by far, a more family centered culture than the U.S. Extended families tend to live in the same neighborhood and frequently in the same house. That gives rise to the idea that everyone is someone’s son, daughter, father, mother, brother or sister. We are people instead of quotas. Mexico is also far more religious than the United States. I would define Mexico as being a secular, Catholic country. Although the vast majority of people consider themselves Catholic, most regularly practice it; but Catholicism is preeminent in the culture. While I am not a Catholic myself, I can appreciate the effect that it has had on family values.
Having said all of that, if  Mexican cop has something against you, it’s likely that you’re going down for it.  Because of the justice system, it’s much easier to plant evidence, bring false witnesses, or whatever else gets the job done for them. Cops are still cops and where there is opportunity to abuse authority, it will be abused; but when it comes to routine interactions with the police, I’d much rather deal with Mexican police as there is far less risk of getting beaten, tazed, shot or unjustly imprisoned than there is when encountering a cop in the United States.
91
SHARES
FacebookTwitterGoogleRedditTumblr
DiggLinkedinStumbleuponMailPrint