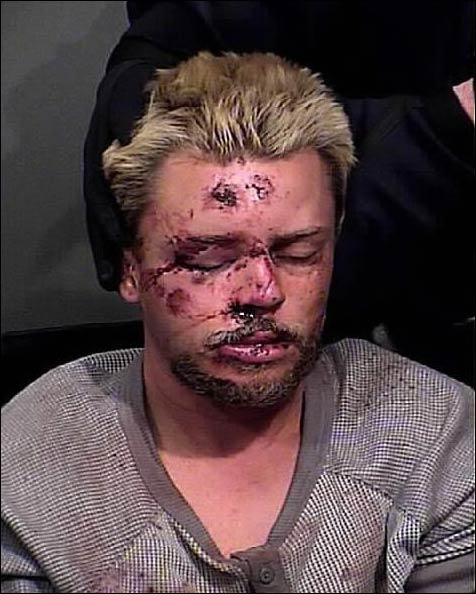 “Amazing video of police booking an unconscious man. He was rolled into the station in a wheelchair and booked. His family claims he was beaten and tazed by the police. Why was this man not given proper medical assistance?” -Anonymous

According to Luke’s Corner:

BULLHEAD CITY, Ariz. — The video speaks for itself. It shows a bloody, unconscious Robert Stout being wheeled into jail shortly after an encounter with the Bullhead City Police Department.

Stout is posed for his mugshot, with his head held up by an officer, before being placed in a cell.

The video was released in an information request placed by 8 News NOW. Stout was arrested on February 2nd after a foot pursuit with police. According to the police report, Stout was tased by officers and fell on his face. However Stout’s family claims he was beaten by police.

There are discrepancies in the police report. In an addendum to the original police report, Corporal Brad Holdway claimed Stout was combative at the hospital and had to be restrained. However medical records, and video from the jail, shows Stout was unconscious. The addendum was filed 20 days after the incident

“It would be impossible for him to be combative,” said Stout’s mother, Theresa Stout. “An outside doctor said every bone in his face is fractured.”

An internal investigation by Bullhead City Police has been opened in the case.