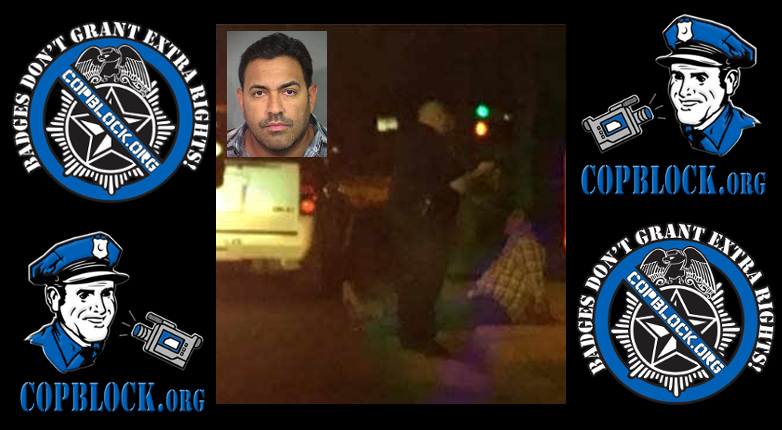 Last week (July 16), yet another Las Vegas cop was arrested for DUI. In this particular instance Officer Antonio Munoz was also charged with hit and run after leaving the scene of multiple accidents he caused in the process.

According to the arrest report (see below), Officer Munoz essentially played vehicular pinball as he went down the freeway. As he smashed other cars out of his way on I-15, which passes through central Las Vegas, he left a trail of damage and injured people in his wake.

In spite of all that, his bail was only set to $100,000 when he made his initial appearance before a judge having been charged with three felony charges and facing a possibility of as many as 12 additional charges.

It’s, of course, incredibly more likely that he will receive the typical Policeman’s Discount and rather than being charged with those additional crimes, he’ll be given a plea bargain involving a medium to hard slap on the wrist and nothing close to what an average citizen would receive.

(I’ll definitely update this when – not if – that happens. Stay tuned.)

The report states Munoz was driving his white GMC Yukon just after midnight Saturday and caused injury crashes along Interstate 15, near Charleston Boulevard.

One of the people Munoz is accused of crashing into is KC Wells. He said he was driving home from work with his wife when his vehicle was struck.

“I heard a lot of commotion coming on behind me and looked in my rearview mirror and saw a truck coming through, and it was just hitting cars and knocking them out of the way,” Wells said.

Wells was able to avoid a direct hit but the back of his vehicle sustained damage. His wife called 911, and he pursued the Yukon.

An NHP trooper observed Munoz driving erratically, speeding and running a red light. According to the report, during the traffic stop Munoz told the trooper he had cancer and denied drinking alcohol.

The trooper smelled alcohol in the Yukon and noted that it had extensive damage. One of the hit-and-run victims arrived and identified Munoz as the driver involved.

BTW, in case you missed it, his excuse for driving into a bunch of people on the highway and then having to be chased down by one of those people he hit was that he has cancer.

No mention was made of whether the Internal Affairs Bureau, which is headed by a lieutenant that is facing perjury charges, is currently “investigating” Officer Munoz.