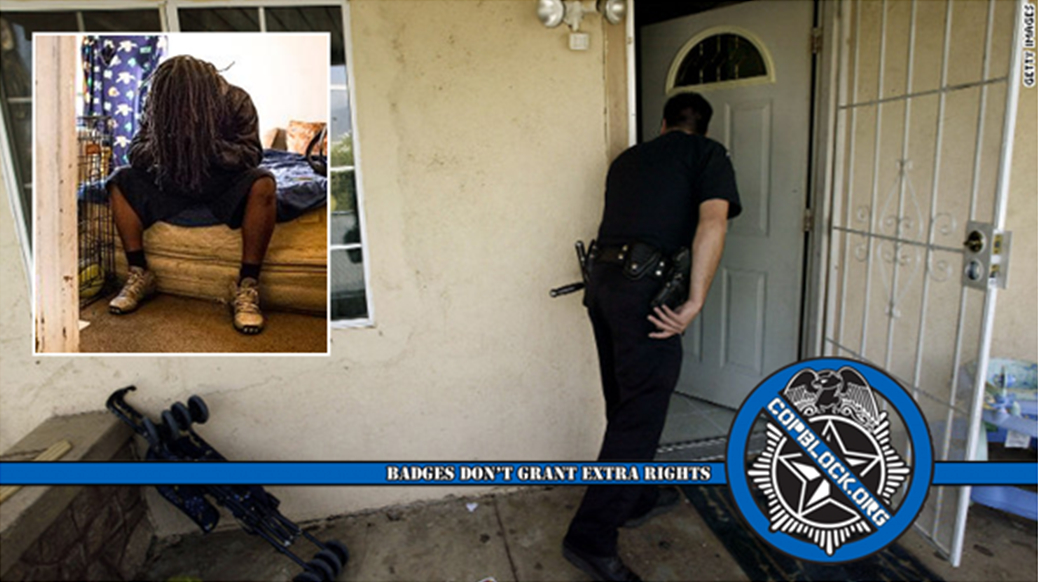 In a case of mistaken identity, a federal jury has ruled that a man roused out of bed and assaulted after Indiana cops entered his home without a warrant, will only receive $1 for each civil rights violation.

DeShawn Franklin was just 18-years-old when, between 2 and 3 a.m on July 7, 2012, three South Bend police officers responded to a domestic violence call a few blocks away from his home. According to court documents, a woman gave officer Eric Mentz a description of her boyfriend, which had assaulted her.

The woman told the cop that her boyfriend was a black male with dreadlocks named Dan Franklin. She said Dan was headed to his parents’ house. The information was then dispatched over the radio by Mentz to other officers. Consequently, Dan is DeShawn’s older brother who lived at the home.

Officer Aaron Knepper was in the area and saw Dan, court documents say, who took off running before a police dog tracked his scent to the back door of his parents’ home. Knepper was then joined at the residence by Mentz and officer Michael Stuk. After requesting that a dispatch operator call the home, the operator reported that the woman who answered the phone was uncooperative and denied having a son. It wasn’t until later that that the cops would learn that the operator had called the wrong number.

As a result, the officers knocked on the door with their guns drawn. According to court documents, Vivian Franklin answered the door and told the officers that her son and husband were inside. She was then told to stay on the porch while the three cops entered the house without permission or a warrant.

The cops first spied Dan Franklin Sr. and demanded that he stand before ordering him to stay in his bed when he told them he could barely walk. The officers then entered a bedroom and saw DeShawn, who wore his hair in dreadlocks like his brother, lying on his stomach on a bed.

Thinking DeShawn was Dan, court documents say the cops concluded that the man was “fake sleeping” after he didn’t respond to commands. He then jumped up when Mentz attempted to hold his arm to handcuff him, lunging at the officer and grabbing his vest and belt.

In response, Mentz punched DeShawn three times in the face. As he continued to struggle, Knepper deployed his Taser and punched him three times in the back. DeShawn was then subdued and the officers handcuffed him and placed him in a police car.

“The cop whose car I was in asked me did I know what I was going to jail for? I told him ‘No,’” DeShawn said. “And then he said I matched the description of a person that they was looking for because of my hair. I told them that this hairstyle was popular right now and a lot of people have it, and I can’t go to jail for something I didn’t do.”

Realizing that they had detained the wrong person, the officer called their supervisor and explained what had occurred. The supervisor advised them to release DeShawn and he was taken back inside his house where they apologized to him, court documents say.

The cops also conceded to DeShawn that his actions were reasonable for a person awakened in the dark by three armed strangers, and Knepper wrote in his police report that “DeShawn was truly sleeping and only acted as he did out of shock/surprise.”

Following the incident, DeShawn’s family filed a civil lawsuit in February 2013 which accused the officers of excessive force, unlawful entry, false imprisonment, false arrest and battery. A city attorney said the family was offered four settlement amounts but instead choose a trial.

The jury reached its decision earlier this month finding that the officers were liable for unlawful entry and unlawful seizure. Despite these violations of the Fourth Amendment, each of the three cops was only ordered to pay $1 to DeShawn and each of his parents for each rights violation – a total of $18 in damages.

According to an attorney, the family was further insulted by being told by the city that they want them to pay about $1,500 in expenses because the trial was held at a federal court house in Fort Wayne, meaning that there were expenses for the three officers’ hotel rooms and gas mileage.

Despite an internal investigation by South Bend police that concluded that the officers did illegally enter the home and use excessive use of force on DeShawn, they received no disciplinary action expect for being ordered to take remedial training.