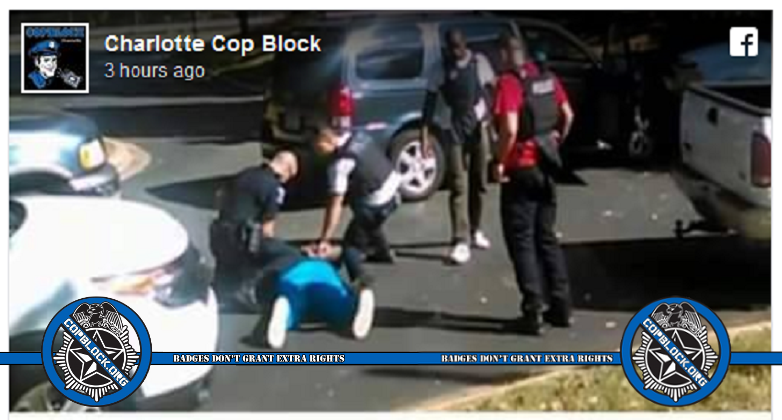 New video footage and information from the police shooting of Keith Scott in Charlotte has been uncovered by the Facebook Page of the Charlotte Cop Block affiliate of the CopBlock Network. The first is obviously a legitimate cell phone video of the scene where Keith Scott was shot immediately after it took place recorded by an unidentified bystander. In the second video included below, a woman being interviewed says that she actually witnessed the shooting.

In addition to the video taken by Keith Scott’s wife Rakeyia that the Scott family released earlier today, another video taken by an eyewitness to the shooting showing the moments after Scott was shot has been made public:

Another video from a witness shot from a distance shows the scene right after the shooting…. You can see officers doing a whole lot… Handcuffing, emptying pockets, pulling his pants down, but NO CPR!!

Also, a video interview of a woman who claims she witnessed the shooting has surfaced. In that video, Tracey Mclain disputes several aspects of the official story from the Charlotte-Mecklenberg police, including the identity of the officer that shot Scott. She also states that the police threatened to shoot bystanders and didn’t start doing CPR on Scott right away, although eventually they did:

A woman who identifies herself as Tracey Mclain says she was there, she witnessed the shooting and says that the #CMPD are lying and a white officer shot him not the black officer and that they also lied about giving CPR right away… The #Truth is coming forward piece by piece….

Another issue raised by those at Charlotte Cop Block concerns the photo CMPD released purporting to show a gun at the scene after Scott was shot. As you can see in the photos within the embedded post below, no such gun is present within the video taken by Rakeyia Scott. In fact, what is claimed to be a gun in the CMPD’s photo is actually pretty clearly a medical glove, as pointed out in the post. (You can also see one of the cops pulling a black glove off and throwing it on the ground in the first video above.)

This obviously brings up the question of why the CMPD would lie about the photo supposedly showing a gun. If there genuinely was a gun there would be no need to do so. Also, it brings into question whether the blurriness of the area where the glove is was done as an intentional manipulation of evidence to try and support their official story.

If the folks at Charlotte Cop Block come across any additional videos or information, I will update this post. You can also submit content and/or video to the CopBlock Network yourself using the CopBlock.org Submissions Page.

Video of Keith Scott Shooting Recorded by His Wife