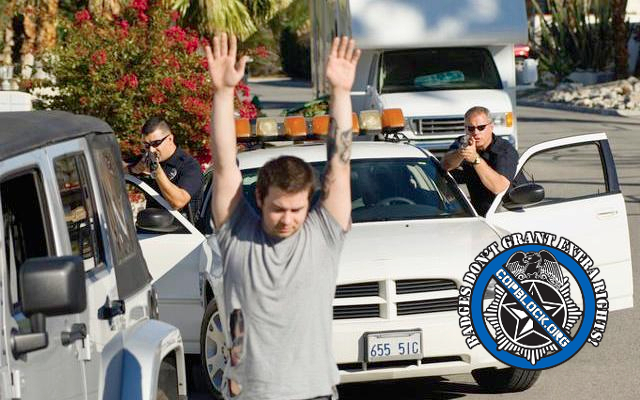 (FPM) Dominic Elliott was in the middle of his drivers training when he and his instructor were pulled over by the Fresno Sheriff’s Department. Patrick McComb, the founder of Driver America told me, “the Sheriff’s deputies followed the 2003 Ford Focus for six miles, knowing full well it was a student driver conducting driver’s education”.

The reason the deputies were following the student driver, was a questionable license plate. After deciding to conduct a felony stop, the deputies requested backup. A total of six Fresno Sheriffs deputies with weapons drawn proceeded to extract Dominic and the instructor from the vehicle, shove them on the ground and cuff them.

During the stop, Dominic claimed the Deputies roughed him up; medical records show they sprained his wrist and caused nerve damage in his arm.

“He aggressively grabbed my arm, my right arm, aggressively and yanked it up and down and I heard my wrist pop.”

Dominic said he was at the intersection of Blackstone and Bullard when he noticed the officers taking down the plate number. When he mentioned it to his instructor, he was told not to worry about it.

According to Patrick McComb, the deputy who detained Dominic and the instructor the Deputy asked if he – the instructor –  was aware that the vehicle was supposed to be blue?

Being former law enforcement myself, he was very unprofessional. One of the things he told my instructor, after they had been handcuffed, pushed to the ground, extracted from the car with six guns pointed at them…six; on a driver’s training lesson. The officer told my instructor the most stupid thing anyone could say; he asked my instructor do you know that this vehicle was supposed to be blue?

So in other words the officer knew before he pulled them over that the information he was looking at was bogus.

The instructor who was teaching Dominic told Patrick that the supervisory officer arrived on scene with a look of panic and immediately told the deputies to remove the handcuffs. He recognized that the deputies were acting out of accordance with policy and told the instructor to take Dominic home and then meet him at Drive America to inspect the vehicle. The deputies also lied to Dominic’s parents that Drive America was at fault for using the vehicle in the first place. A statement that was meant to shift any responsibility from the Sheriff’s office and onto Drive America.

To finish up, just to show you how dangerous this whole situation was, they told the instructor to take the kid home and meet us back in your parking lot so we can view the vehicle. They did a felony stop on somebody at gunpoint and then let them leave the scene and ask them to please meet us back here later?

According to the family attorney the police should have opted for a different approach.

Patrick told me that through his own investigation he came to the conclusion that this entire incident was due to an oversight in information.

A few years back a license plate was stolen from a different blue Ford Focus used by Drive America to conduct road tests. Patrick reported it to the police and the DMV. However the Fresno police officer who took down the incident report wrote down the plate number on the wrong Ford Focus. It appears the Sheriff’s office never updated their info and this oversight led to a gross violation of civil rights and abuse of power.

She sees the license plate on the other car and writes it down as stolen. How could it be there if its been stolen?

Patrick was a traffic officer with the Fresno Sheriff’s Office and as such is well versed in the correct ways to handle vehicle stops, stolen vehicles, and other violations that happen while traveling and he told us that when you run a plate that is possibly stolen, you check the registration to see if the plates match the vehicle. The sheriffs did this, but they neglected to mention that to the news.

They (Sheriff’s Deputies) are looking at a computer screen, I know this for a fact, it says in front of me is a white Ford Focus with this license plate. It’s owned by Drive America – Patrick McComb – It’s good; nothing wrong. Then they have another screen that shows this license plate may have been stolen three years ago, but they are looking at one screen that says everything is fine. So they decide to conduct a felony stop and call in four more patrol cars on a driver’s training student. Scared him to death. They hurt him, grabbed his arm and twisted it. Possibly did some nerve damage.

When I contacted the Fresno Sheriffs Office, Tony Botti, the public information officer, claimed he had no idea what I was asking about. After being reminded about the details of the incident, he said he vaguely remembered something like that but quickly “found” some notes. Overall, he declined to comment stating it was an open investigation into a personnel matter.

However, Deputy Solis, the officer who initiated the stop, contacted Dominic’s parents and lied about Drive America’s culpability in the matter. Patrick told me that Deputy Solis tried to throw him under the bus. After abusing their child during his driver’s ed, Deputy Solis told the Elliotts that it was Drive America’s fault and they shouldn’t be using that car for driver’s training.

After receiving false information from the Sheriff’s department. Dominic’s parents called Patrick, irate that his vehicles aren’t up to standard and their son was hurt because of his negligence. However, Patrick has proof that the Focus is a legally registered and inspected official driver’s training vehicle and told the family that he is just as angry as they were and felt violated due to that fact that Dominic was his student.

I feel assaulted as much as you. Your son is my student, they assaulted one of my students. Now I’m mad. First of all what he told you is wrong. This is a legally registered, licensed, tagged and inspected official driver’s training vehicle.

Patrick believes the deputies tried to use him as the fall guy for their actions in order to avoid any correction for their behavior. Thankfully, Patrick has the evidence to clear himself and Drive America of any responsibility for the officers’ misconduct.

The sheriff’s department obviously tried to use me a scapegoat, which will not work in the future and all of that will come to light.

In the age of technology, there are multiple ways of gaining transparency in order to prove your innocence and Patrick McComb realizes that his instructors need to film the police on the off-chance that an officer feels the need to stop them during driver’s training.

The only thing my instructor did wrong was he should’ve pulled out his damn cell phone and recorded all of this.

Patrick McComb taught Fresno Sheriff Margaret Mims oldest son to drive. If your children are about to start driver’s training, make sure to check out Drive America for the same standard of education trusted by Fresno’s only elected law enforcement officer.

P.S. The Fresno Sheriffs won’t treat you this bad if you have a gun in the car.