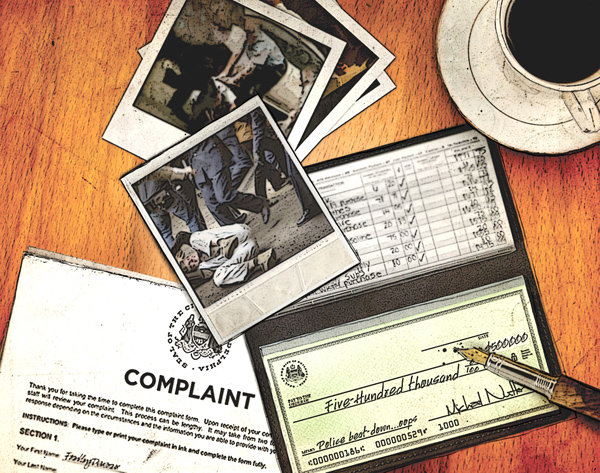 Philadelphia and its citizens are at the mercy of incompetent politicians who refuse to recognize that there is a huge problem with police brutality that many groups such as Amnesty International which notes that Philadelphia has the most corrupt police department in the United States.

Anthony Abrams, a psychologist researching drug addiction, was looking for a client on the streets of Kensington when Philadelphia Police Officer Eric Burke pulled up. It was the afternoon of March 8, 2010.

“He said, ‘What are you doing here?’ I said, ‘I’m a psychologist. I’m trying to find a client of mine.’ He immediately slammed me to the ground, put his boot against my head and said, ‘You tell me what you’re doing here or I’m going to kick your fucking head in,’” Abrams testified in June 2011, before a rare hearing of the city’s beleaguered Police Advisory Commission. Burke then put his foot on top of the doctor. “And then,” Abrams continued, “he began stomping my head with his boot.” Witnesses corroborated Abram’s story at the hearing; one said the officer called the white doctor a “disgrace to our race.”

Most Philadelphians lack doctoral degrees. But many, if the city’s increasingly expensive cash payments to alleged victims of official violence are any indication, have received similarly harsh treatment from Philadelphia Police. In 2011, the city paid out $13 million to people alleging harm from police, largely to alleged victims of excessive use of force. Critics say that the city lacks meaningful oversight of police misconduct and, instead of trying to prevent it, treats payments due to the behavior like a cost of doing business. Abrams, who had a titanium plate surgically inserted to repair his crushed eye socket, received $285,000 for his trouble.

“The overall amount of payments that the city has made … would strongly suggest that there is a problem in the Police Department with police violating the civil rights of residents,” says University of Pennsylvania law professor and civil-rights lawyer David Rudovsky. “Even if some of the cases were settled just to avoid the cost of litigation and may not have been fully meritorious, looking at the large number and amounts clearly indicate that there have been many cases in which police have committed troubling acts of misconduct.”

The city, however, doesn’t see a problem, contending that recession-weary Philadelphians and greedy lawyers are suing the city for a paycheck.

“There are more cases every year,” says Craig Straw, the chief deputy city solicitor in the Law Department’s Civil Rights Unit who oversees the legal defense of the city and officers in cases alleging police misconduct. “I look at it this way: The city of Philadelphia has more lawyers than any other city.”
The number of lawsuits against police, which he says includes 300 to 325 new actions filed each year, is small, he says, given the department’s size.

The city nonetheless contends that it takes the matter seriously. Straw says settlements are closely reviewed to identify and address trends that might provoke lawsuits so as to both improve policing and save taxpayer money.

“Our function is to stop systemic problems,” says Straw. “If we see issues arise, we have an open connection with the commissioner’s office.” He acknowledges that there are “some cases that settle because they’re problem cases.”

Police Commissioner Charles Ramsey echoes Straw, saying, “Oftentimes, the city will settle just to avoid prolonged court actions and so forth that can run up quite a tab. But we do have some [cases] where there was clearly some fault on the part of the officers.”

Straw points to two examples of reforms undertaken in response to the Civil Rights Unit’s prodding: crisis-intervention training to improve police treatment of mentally ill civilians in 2007, and, in 2001, a program to reduce injuries caused by handcuffs. The Southeast Pennsylvania Mental Health Association, which helps with the trainings, credits the Police Department for what they call a major success. But the initiative for creating the programs, says SPMHA’s Debbie Plotnick, came from advocates, not the city.

Ramsey mentions a number of other initiatives undertaken in response to lawsuits or complaints: newly emphasized constraints on, and an audit of, the stop-and-frisk policy; reminders that individuals with a permit can carry a gun in the open and that civilians can photograph police; new policies to deal with foot pursuits and the behavior of off-duty officers; directives on how to safely deal with people who have swallowed drugs to dispose of evidence; and trainings in the wake of recent sexual-harassment and assault allegations.

Police violence has in recent years been overshadowed by persistent corruption and wrongdoing scandals, often uncovered by the Daily News: narcotics officers allegedly fabricating evidence and robbing convenience stores in a 2010 investigation, a dysfunctional Firearms Identification Unit in 2011, the promotion of top brass who’ve faced repeated allegations of sexual misconduct in 2012 and another narcotics-squad scandal this year.

As a result, police brutality has faded into the background. For our “Excessive Force” series, City Paper is reviewing a sample of cases alleging violence at the hands of police that resulted in six-figure settlements between 2009 and 2011, including civilians contending they were punched, hit with nightsticks and run over with a car.

“There’s nothing exceptional about it. It’s a level of routinized violence that’s just taken for granted by police officers,” says Penn anthropologist Philippe Bourgois, who, like Abrams, was in 2008 thrown to the ground, kicked and arrested while conducting research on drug corners. Bourgois’ attorney told him the city probably would have settled his case for $15,000. Eager to resume his work, he didn’t sue.

At the center of the current debate is the role and effectiveness of the Police Advisory Commission. Created in 1993 by an executive order by Mayor Ed Rendell, at then-Councilman Michael Nutter’s insistence, the PAC is often derided as toothless. Abrams’ hearing was one of just three held in 2011. The PAC has a bare-bones budget of $275,000 and a reduced staff of just two investigators; it lacks any power to take punitive or corrective action against officers and has had no permanent executive director since July. In 2011, the PAC received 93 complaints, 52 of which it agreed to investigate. The average investigation took 14 months to complete, twice as long as in 2004, when the office had a staff of six.

“You have two investigators for the entire city. It’s designed to fail,” says Councilman Curtis Jones, who has introduced legislation to make the PAC permanent and increase its powers and funding.

“[The police] nowhere near utilize the same normal traditional investigative process they’d use if you or I were accused of a crime,” a militant-sounding Nutter said back in 1995. Today, Nutter has changed his tune and opposes Jones’ bill. “The mayor,” says spokesperson Mark McDonald, “believes that the current institutional arrangement works. … We do not see the need for what the councilman has proposed.”

PAC interim executive director Kelvyn Anderson, who says “we’ve always felt that permanency and a proper budget was something that we needed to do the job well,” nonetheless insists that the PAC is no dead letter. “There are many folks that believe that an oversight agency that does not have the ability to hire and fire is useless,” he says. “I don’t think our history bears that contention out.”

Anderson emphasizes they are working to “expand public knowledge and engagement” with regard to complaint data and the reporting of fatal incidents.

Ramsey says he wouldn’t “have a problem” with Jones’ bill. The Fraternal Order of Police, however, is an ardent defender of the status quo and has opposed the bill. In March, the FOP wrote a charged letter to the PAC accusing it of posing “a direct threat to public safety in this city.” FOP Lodge 5 president John McNesby did not respond to requests for comment.

The FOP routinely fights the disciplining of its members. It files grievances with arbitrators, who then frequently overturn the punishment meted out by superiors. Ramsey says that he is “not a big fan of arbitration. I’ve seen decisions that have gone against the city when I think clearly the evidence was such that the department was justified in the discipline that was administered.”

“This is the most difficult, challenging legislation that I will propose,” says Jones, regarding the political opposition. “It goes down right next to taxation.”

This post was submitted by “Accountability” via CopBlock.org’s Submission Tab.