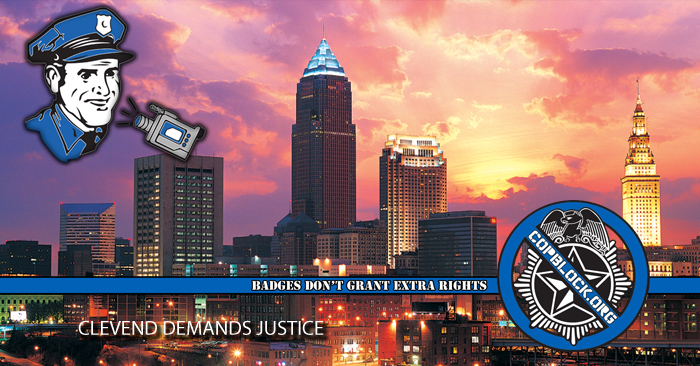 The ‘Cleveland 8’ have put out a video calling for the prosecution of the officers responsible for shooting Tamir Rice, the 12 year old boy murdered for having a BB gun in his waistband. For those who don’t know, the ‘Cleveland 8’ are eight local activists and community leaders that have written letters and made videos calling for charges to be filed against the two officers who shot Rice.

The group filed citizen affidavits June 9 calling for charges to be filed against Cleveland Police officers Timothy Loehmann and Frank Garmback for their respective roles in the Nov. 12, 2014 shooting outside the Cudell Recreation Center.

“The actions by chief law enforcement officials in the City of Cleveland and Cuyahoga County are clear examples of abuse of discretion and the unequal administration of law that breeds distrust in our criminal justice system,” the statement released Wednesday says.

There has also been speculation that Chief Williams, being friends with Loehmann’s father, ignored the Independence Police Department’s mental evaluation of his pal’s numbnut son and gave him a job anyway! It was reported a few days ago by ClevelandLeader.com:

Tim Loehmann was hired by the Cleveland Police Department in March 2014, while Chief Williams’ bio page declared he was US Marshal’s liaison, despite Loehmann face planting in a literal pool of tears at the Independence Police Department, and failing the Cuyahoga County Sheriff’s exam in 2013.

It appears to any sentient being that perhaps Tim Loehmann’s pappy, a US Marshal retiree, got his train wreck son a job as a cop through the CPD US Marshal’s liaison, Chief Calvin Williams.

Living in Cleveland, I had the opportunity to meet with the Rice family, and offered as much support as I could. Greater Cleveland CopBlock raised over 500 dollars for the family. So far as I know it was the only money that didn’t get confiscated by some some greedy third party. I will continue to help the Rice family and anyone else in the Greater Cleveland area try to find justice in these police brutality cases.

In addition to this there is a preliminary hearing for some of the 71 protesters arrested in Cleveland, who were protesting these high profile cases here in Cleveland, and throughout Ohio. You can see Ademo’s video of the arrests here:

‘Cleveland Demands Justice For Tamir Rice’ will take place on July 14th,. Their event can be found here. The organizers are asking that we come to the Justice Center on the 14th and stand with them on the steps of the courthouse, and try to film inside the courtroom at their preliminary hearings.We ask that the charges against the protesters be dropped! They were arrested for following police orders. These charges are ridiculous and stem from the fact that the Cleveland police had no productive way to force them to disperse. That is because our anger over these cases can no longer be silenced by basketball games!

We will be chalking the Cleveland Police at the Justice Center on the 18th of July. Come join Ademo and myself as we continue to smash the state with messages they don’t like. They don’t like the message so much they always come and wash the chalk off instead of just waiting for it to rain like they do when you chalk “I love the police”