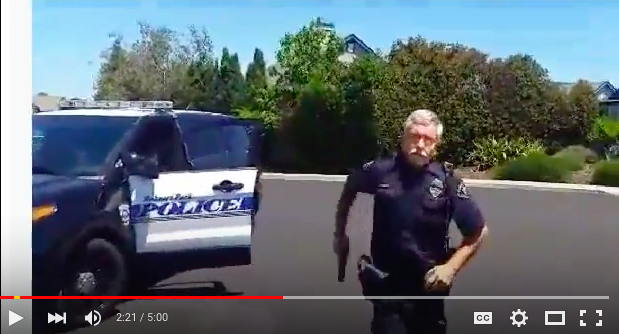 A man sees a cop meandering near his home. He has already had problems with these people before. So he does the rational thing and pulls out his phone and starts recording. The cop, on the other hand, does not do the rational thing. After a few minutes he exits his car, demanding that the the man filming him takes his hand out of his pocket, while pulling out his weapon.

“Put your gun down. Really?” The interaction continues as the officer keeps his weapon out and it eventually becomes apparent that the officer is upset because the man was, “taking pictures of me.” The cameraman explains why he is filming, because the cop was acting oddly and because there is apparently some history here. The cop continues to ask, “Why are you doing this?”

“Your department is corrupt.” says the guy with the camera.

To which the cop disturbingly responds, “Are you some kind of a constitutionalist crazy guy?”

The man whose youtube page the video was released on goes by the name RRryan 71187. In the description he explains-

How about having a gun pulled on you today. Love the RP Police.
NOTE, I am not anti police however the lies and distrust I’ve encountered from the Rohnert Park & Petaluma Police over the last 15 months is something I wouldn’t ever believe if I heard it from someone else. This is just a time I was smart enough to hit record as I was approached at my home.
Backdrop: I was hooking the boat up when the officer pulled slowly into my court. When he rounded infront of my house he stopped yet did nothing, then crept forward and instead of leaving toward Snyder he rounded the court opposite of me, then stopped facing me for a few minutes, doing nothing but pointing straight at me/my house. After a couple minutes I was concerned enough to pull out my phone and hit record. Glad I did. The arrogance he showed me shouldn’t come from an officer of the law. They should de-escalate, not escalate or provoke….”

It is quite clear that the officer had no reason to unholster his weapon and hold it in an intimidating manner. The man holding the camera posed no threat to him while he was in his vehicle. He could have just drove away. Instead he chose to get out of his vehicle, because he was obviously in a state of twisted panties with the man for filming him, and used a minor circumstance of the mans unrelated bodily position to escalate the situation to a high level. This is a blatant abuse of power and a disgrace to the man, as well as to the Rohnert Park Police Department if they choose to ignore their officers extreme methods.