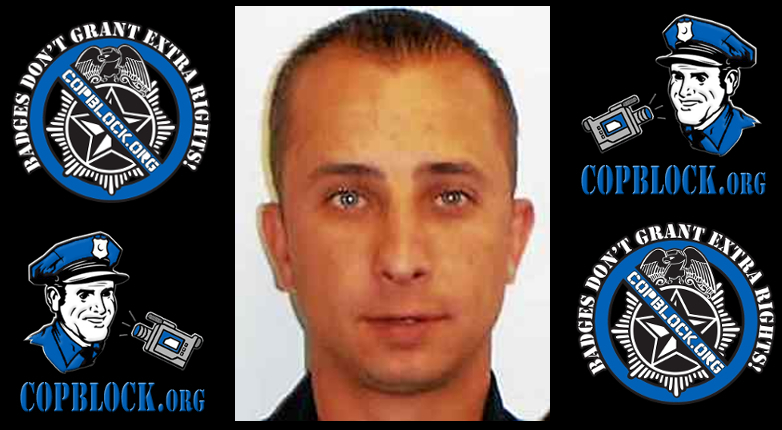 Nicholas P. Kozack, a Kingston NY police officer, got drunk on St. Patrick’s Day, stole a car, wrecked into a highway sign after missing an exit, flipped the car totaling it, and then ran away from the accident site. He was later caught hiding nearby in someone’s backyard. Initially, he was charged with DWI, leaving the scene of an accident, and felony possession of stolen property.

One would think he’d be in big trouble after all that. However, one would soon be reminded that Officer Kozack has a Magic Suit that renders him impervious to meaningful consequences for his actions, regardless of how illegal, immoral, dangerous, or even deadly they might be. Instead, Kozack received a rather generous Policeman’s Discount and was allowed to plead to a misdemeanor DWI charge by Ulster County Assistant District Attorney Margo Hanstein.

His “punishment” will consist of a $1000 fine, getting one of his co-workers to sign a paper saying he attended a “victim’s impact” class, and having to get someone to blow into the tube attached to his car for a year when he drives drunk (unless he steals another car in order to avoid that indignity).

Priot to that, he also had to pay the person whose car he stole almost $2500 to cover what the insurance didn’t pick up and was given a thirty day suspension before it converted into a paid vacation for the past six months. But he could afford that since he didn’t even lose his $68,000+/year job. He also didn’t even lose his license, although there’s no word on whether he will be required to have an anti-alcohol ignition lock installed on his patrol car.

Via the Daily Freeman:

Kozack pleaded guilty before Ulster town Judge Marsha Weiss in full satisfaction of the charges against him. He was then sentenced to pay a $1,000 fine, ordered to attend a victims’ impact panel, and was ordered to install an ignition interlock device on his vehicle for one year.

Kozack was given a 20-day stay in order to apply for a conditional driver’s license. His license had been surrendered to Weiss in April.

His attorney, Kevin Harp, said Kozack had waived an earlier hearing with the state Department of Motor Vehicles regarding his refusal to submit to a sobriety test after the accident.

Prior to pleading guilty, a felony possession of stolen property charge against Kozack was reduced to a misdemeanor by Ulster County Assistant District Attorney Margo Hanstein.

The stolen property charge was in relation to the vehicle Kozack was driving at the time of the crash.

“He paid restitution to the owner of the vehicle to cover all out of pocket expenses not covered by insurance,” Harp said of Kozack. He said paying the $2,470.25 in restitution was required of Kozack as part of a plea deal.

Kozack, who was off duty at the time of the crash, was suspended for 30 days without pay after a unanimous vote of the Kingston Police Commission on March 16. After the 30 days expired, Kozack remained suspended but began receiving his pay again.