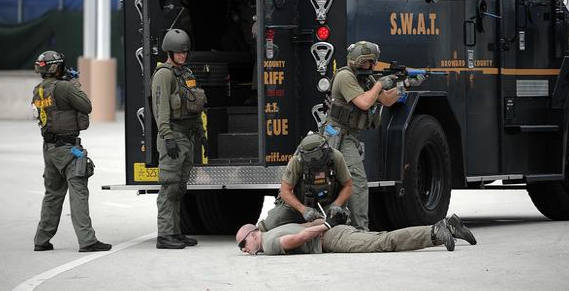 Sovereign citizens are the new communists. Not in ideology or stated end-goals, but as the centerpiece of a marketing campaign selling fear.

Not too long ago, “communists” were the scarecrow pointed-to by the marketers (which, the same marketers claimed, only they could protect you from). The manufactured fear was inculcated into the minds of millions in indoctrination centers and was parroted by the lamestream media. Many unthinkingly accepted the insidious growth of the marketers’ criminal enterprises. A few benefited from the labor and lives of many.

Decades later, economics having taken its course, another enemy had to be concocted.

After injecting “illicit” substances into communities (from which the “war on drugs” was spawned, and the commercialized warehousing of people was said to be necessary), the new threat was said to be an amorphous enemy: “terrorism”. The “us verses them” paradigm, the marketers found, could be leveraged, to the detriment of peaceful strangers thousands of miles away as well as many living in the turf they claimed, for their own gain.

Reminiscent of the red scare of yesteryear, the “militia movement” and others labeled “anti-government” were around every tree, and they were to be feared.

Despite (or in actuality due to) the criminal actions at Ruby Ridge and Waco and other places, the initiators of violence dictated to those they perceive as human cattle (aka “citizens”) that further victim disarmament (aka “gun control”) was necessary. As was the usurpation of liberty.  Or so it was claimed.

A tremendous allocation of resources has been devoted to furthering this misinformation campaign – from the indoctrination of tens of thousands of “law enforcement” personnel to the funding college majors on ‘homeland security’ (a misnomer if there ever were one).

If you search “sovereign citizens” online you’ll see content with such accompanying text such as, “Extremism in America” (from the ADL) and “A Growing Domestic Threat to Law Enforcement” (from the FBI).  Both of those outfits gain as each person adopts the fear they’re spreading. And the lamestream media is goosestepping along. The article below, ‘Sovereign citizens’ assault Port Everglades by Robert Nolin – who acknowledges on his bio that he’s worked with the gang called “government” – is ultimately couched on fear and faith in the almighty ability of the marketers to provide protection. Read the article. Replace the word “sovereigns” with “females” or “Native Americans” or any other perceived category. Does it strike you differently?

As Dave Hodges noted in over at ActivistPost.com:

This anti-dissident strategy takes America one step away from full implementation of disappearing American protesters under the NDAA for sovereign citizens. This is a very slippery slope and the government and its police agencies are fully committed to this strategy.

“Sovereign citizens” is the latest in fear-marketing – are you buying?

Amid the explosions, smoke, roaring vehicles and chattering gunfire of a terrorist attack Thursday afternoon at Port Everglades, one fact became chillingly clear:

Of course it wasn’t a real terrorist attack, but rather a large-scale SWAT training exercise mounted by the Broward Sheriff’s Office involving boats, bus, bombs and booby-trapped hostages.

“This is really a worst case scenario,” said Saito, the SWAT team member who concocted the training storyline.

In Saito’s plot, seven “sovereign citizens,” or militia-styled revolutionaries who advocate the government’s overthrow, assault the port by boat. Their goal: steal a shipment of arms and ammunition transiting through the facility.

Initially thwarted by deputies, the terrorists seize hostages, wound a deputy, and leave a backpack full of explosives by Terminal 22. Then things get serious.

The terrorists strap bombs to the hostages, take over a bus, and engage in a full-blown gunfight with SWAT team members. The bad guys use paintball guns. The helmeted, body-armor-clad SWAT team responds with simulated ammo.

“It’s all about being prepared,” said SWAT chief Capt. Eddie Grant. “South Florida is a hot area, we have a stadium, two major ports. We have a lot of high-profile targets.”

Among agencies participating were the Fort Lauderdale Police SWAT team and U.S. Customs and Border Protection. The Coast Guard patrolled the waterway and FBI agents portrayed the terrorists.

The SWAT teams unleashed a full panoply of military-style armament. There were two Bears — massive armored vehicles with turrets for automatic weapons fire — a beefed up front-end loader that lifted an overturned car like a toy and Hummers packed with serious firepower. Machine guns stuttered, and paintball rounds spattered the armored cars.

“It gets your blood going,” Grant said.

“They enjoy being out here,” Saito said. “They look forward to the challenge.”

Team members navigated hallways and rooftops and charged a bus to free hostages. Red-shirted trainers rated their responses and briefed the troops afterward on what was done right and done wrong.

At the end, 12 hostages were rescued unharmed. “The hostages in this situation are most important,” Grant said. “We’ve got to be bullet magnets, that’s your job. Better you than the hostages.”

And the seven terrorists? They were, as Grant put it, “neutralized.”