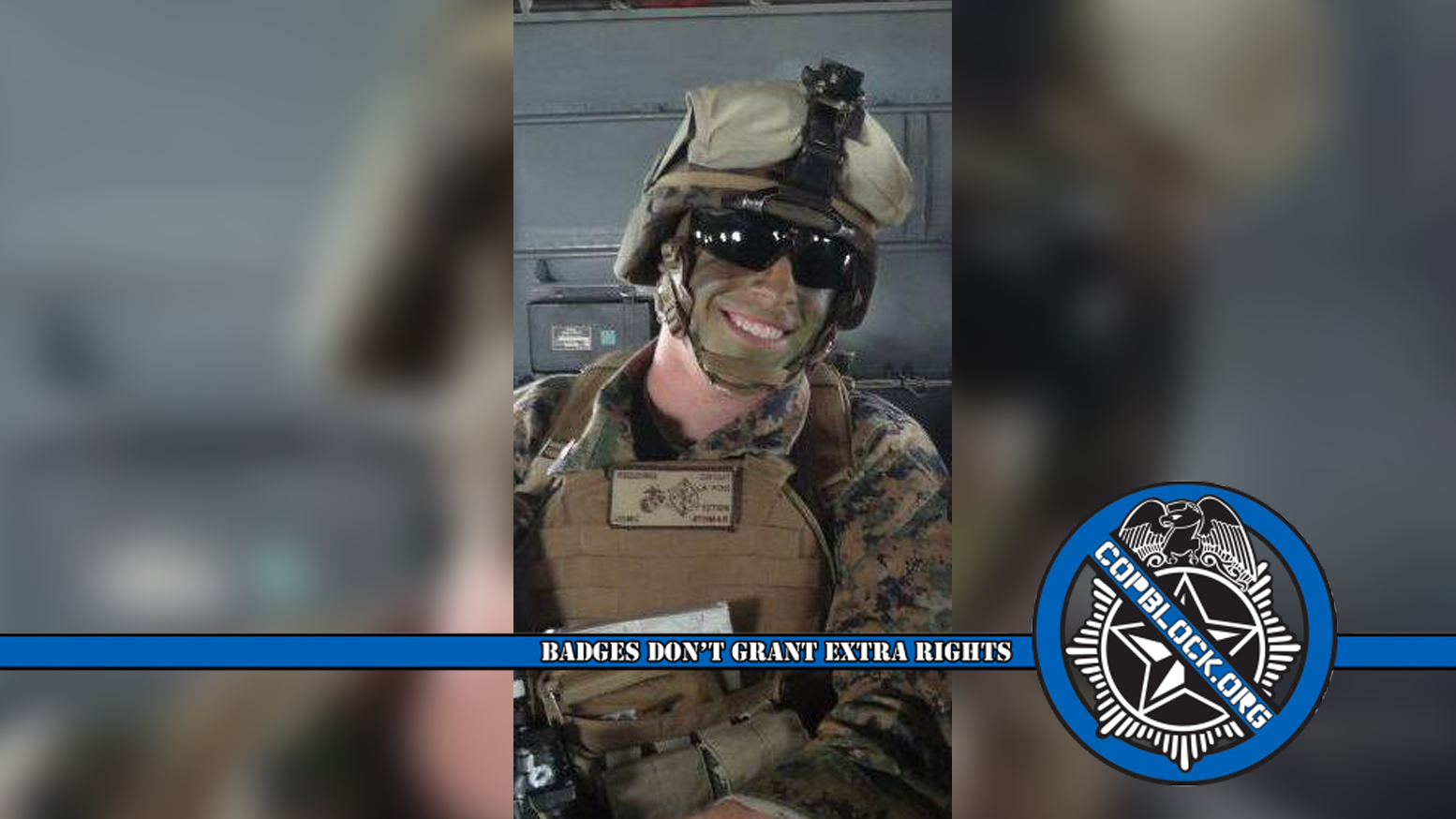 This article was originally posted at TechDirt.com by Tim Cushing.

Today’s cautionary tale of How Not to Use the Internet comes to us courtesy of a man who someday hopes to carry a badge and gun. His target? CopBlock.org. For those not familiar with Cop Block, it’s a site that tracks police misconduct. Much of what’s collected is anecdotal evidence, submitted by readers, but there’s also coverage of other, media-covered incidents as well as book reviews, organized events and educational material.

But what Cop Block does that some other police misconduct-oriented sites don’t is make an active effort to film police. More controversially, site members have also been known to take to the roadside to warn drivers of speed traps and seatbelt checkpoints. Not surprisingly, law enforcement members who interact with Cop Block members are usually less than cordial.

A post to the Cop Block Facebook page by a former soldier who’s currently pursuing a degree in order to join the Washoe (NV) Sheriff’s Dept. managed to exceed anything these members have seen before. In fact, much of what is included in this person’s (Darren Redding) post is simply abusive, with a couple of comments tracing the edges of the “threat” category.

Your page is pathetic and offensive. The pictures you post and the comments you make seem like you’re trying to incriminate and deface ALL police officers, when 99% of them are great at what they do, it’s the 1% you should be posting about, not the vast majority you pathetic, ignorant, liberal pussy.

You’re just like all the liberals striving for gun control because the actions of a few, insane individuals are fucking it up for the other 99% of gun owners who are responsible with their weapons.

Or let me put it into perspective for a drug using, liberal, hippy pussy like yourself: 99% of people who smoke pot do it responsibly and safely, but 1% of the people who use participate in violent crime, or crash their cars when theyre high and kill others or themselves, but I don’t see you posting about how ALL pot smokers should be punished.

If you were a law abiding citizen you wouldn’t have any problem with 5-0, but something tells me you were probably being a jackass towards a police officer and you got what was coming to you, and that inspired you to make a page giving a bad name to all law enforcement.

You might as well bad mouth the military and veterans like myself because of those marine scout snipers that pissed on some dead Taliban a few years back. According to your logic that means ALL active duty and veterans are heinous heathens right?

You’re a fucking bitch and I hope some cop beats your ass next time you’re “protesting” or filming them or whatever. In fact I’m about to start the training academy for the washoe county sheriffs dept in reno, Nevada and I can’t wait to deal with punk ass bitches like you. I would beat your fucking liberal ass just for the sheer joy of it.

Suck my fucking dick you waste of breathable air, you should have been aborted. But I guess your mother was a dumb ass waste of life like you. You’re the reason that there’s no hope for the human race, I can’t believe people like you exist, if I had my way, there would be another holocaust with camps and gas chambers full of fucking cunt scabs like you.

I hope you die

What’s amazing about Redding’s post is the sheer amount of violent imagery deployed. Not content to merely “beat” members’ “liberal asses,” Redding escalates it into Godwin Territory by wishing a “holocaust with camps and gas chambers” on Cop Block’s 90,000+ fans and members.

Redding complains about the attitude of those at Cop Block, specifically mentioning how it supposedly paints all cops as bad cops. Whatever point he was trying to make about the good cop/bad cop ratio is completely destroyed by his next several dozen words. The attitude on display here would put Redding (should he actually make the cut as an officer) clearly on the “bad” side. You can’t defend good cops by wishing degradation, pain and death on those you disagree with

Hopefully, Redding’s own self-destructive behavior will keep him from acquiring the power he needs to torment “liberals,” “pussies” and other people who are severely in need of “getting what’s coming to them.”

Tempering all of this is the fact that this is a Facebook post, a venue where stupid things are “said” all the time. A quick rundown of the comments on Cop Block’s Facebook page shows there are plenty of people with the same mindset as Redding’s, only coming at it from the opposite direction. Sure, these commenters aren’t aspiring to go into law enforcement, but it doesn’t make their comments any less terrible.

At this point, Redding is still in school (presumably pursuing a criminal law degree) according to this comment at the Bad Cop No Donut subreddit. (This bare bones LinkedIn account seems to verify that.) If he’s looking for a job in law enforcement, he’s greatly sabotaged that chance. Contacting the Sheriff’s Dept. seems to be a waste of time since he’s a few years away from applying. Should “the internet” decide whether Redding is allowed to chase his dream? Perhaps not, but Redding’s own words seem perfectly capable of undermining that. The greater problem is, if this is Redding’s mindset, that his attempt to join the law enforcement ranks is still a few years off (his LinkedIn page estimates a 2016 graduation date). By that time, any outrage will have long since died down and his scrubbing efforts will have become nearly invisible. And maybe, just maybe, Redding will join a force that won’t tolerate his violent urges towards law enforcement critics. Who knows? Stranger things have happened.

But the underlying message here is clear: if you are perceived as painting all cops as bad cops, you’ll very easily draw the attention of the worst cops, even those who are still in the aspirational phase.

[UPDATE: 1/26/14] According to Examiner.com, the message sent to Cop Block’s Facebook page was supposedly a result of a friend hacking Darren Redding’s Facebook account. Here is the article, you decide what the truth is:

On Sunday, administrators of the Facebook page “Cop Block” reported receiving a direct message from an individual identified as one Darren Redding, a person claiming to be a recruit with the Washoe County, Nev., Sheriff’s Department. In the message, “Redding” told the administrators of “Cop Block” he would “beat your f*****g liberal a*s just for the sheer joy of it.” The message also called for “another holocaust with camps and gas chambers full of f*****g c**t scabs like you.” But Bob Harmon of the Washoe County Sheriff’s Department told Examiner.com in an exclusive telephone interview Monday that investigators believe the message is the result of a hacked Facebook page.

“This is the dark side of social media,” Harmon said.

The story has already gone viral on the Internet, with some pages reporting that a “future cop” wants protesters exterminated in gas chambers.

But according to Harmon, there is no “Darren Redding” connected with the department — even as a recruit. Moreover, Harmon added, the message “does not reflect the character of the men and women we recruit.”

The department also sent the message to “Rob,” one of the page administrators of Cop Block.

“We appreciate your taking the time to contact us with your concerns. Mr. Redding is not a Deputy Recruit with our agency. We have been investigating this post to the fullest extent and our investigators believe that Mr. Redding’s Facebook page had been hacked,” the department said in a message page administrators made available to Examiner.com.

Harmon confirmed that a Darren Redding lives in the area and said investigators spoke with him.

Redding, whose page is currently unavailable, reached out to Cop Block page administrators, asking them to take the message down, citing death threats and hate messages from page followers.

“What my friend said was un called (sic) for, but now the harassment I am receiving because of his actions is affecting my life,” Redding reportedly told Cop Block. “So again, I respectfully ask you to remove the post you made about me. And on behalf of what was said by someone you thought was me, I apologize. But I need this post removed as soon as possible.”

In another message, Redding said he was uncertain who had written the message because he had “several people at my house last night.”

“I understand that the content of the post was un called (sic) for and very abusive, but now [I] am being harassed because of it. [Y]our followers have sent me death threats of their own, and have called the local law enforcement authorities on me. [I] was almost arrested today on suspicion of being a terrorist. [Y]our followers have been harassing my family members and my friends.”

Redding acknowledged the message was abusive and repeatedly asked for the post to be removed.

Page administrators have not said if they would remove the post in light of the threats against Redding, but Rob told Examiner he should “take responsibility for his actions and his page.”

“If it was one of his drunk friends he should out them,” Rob said. “Obviously this has brought a lot of negative attention to his name.”

“We highlight the double standard that some grant to those with badges by pointing to and supporting those harmed,” he said, adding that the page does not “hate cops.”

“We believe that no one – not even those with badges – has extra rights,” Rob added. “The failure to realize and act on that is to our detriment. By focusing the disinfecting light of transparency on public officials we safeguard not just our rights but those of future generations.”