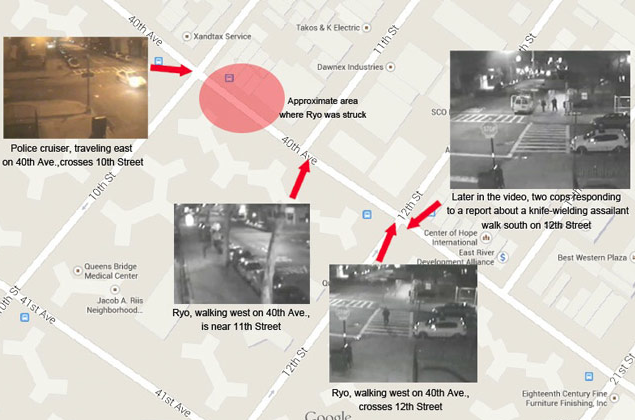 The content below was shared by Peter Chin via CopBlock.org/Submit about the death of pedestrian Ryo Oyamada, who was hit and killed by a vehicle driven by Darren Ilardi, a NYPD employee. Thus far, Ilardi has not been held accountable. Might this situation be different were the driver a non-police employee and the person struck a police employee? That fact makes clear the application of double standards, and it should not be tolerated.

Last year, a Japanese foreign exchange student was run over by a police cruiser in Queens. The NYPD said that the cruiser had its lights and sirens on, but eyewitnesses strenuously denied that, saying that it was silently running over 70 mph down the street. None of those eyewitnesses were interviewed for the police report. The NYPD then refused to release security footage of the accident, and then released a version that corroborated their version of events…until someone found another video that contradicts theirs, and indicates that they had actually doctored the video to release themselves from blame.

Please, help us expose this terrible miscarriage of justice. If the NYPD is allowed to get away with this, then no one can be safe.

This video was uploaded by Vaccaro and White and included on the thorough overview of this incident at Gothamist.com by John Del Signore [you’re encouraged to check out that post for analysis on the video and other details about the incident]:

The text below is from the Change.org petition, Investigate Ryo Oyamada’s Death, which has almost 100,000 signers already:

On February 21st, 2013, Ryo Oyamada was struck and killed by an NYPD cruiser while crossing the street. He was only 24 years old. While NYPD claimed that the cruiser’s lights and sirens were on before the collision, multiple eyewitness accounts along with video footage indicate that the officer was driving over 70 mph down a residential street without emergency lights on, and that NYPD may have covered this up.

Initially, NYPD refused to release video footage of the accident. Then they released a heavily edited video that seemed to corroborate their version of events. But new video secured from the NY Housing Authority directly contradicts these claims, and indicates that someone went to great lengths to cover up the truth.

The entire investigation of the scene was botched. None of the eyewitnesses were interviewed for the police report, officers did not measure skid marks left by the car, did not investigate the driver’s phone records from the time of the crash, nor did they retrieve information from the car’s data recorder before it was erased.

The officer who killed Ryo, Darren Ilardi, said he was responding to a 911 report of a knife assault. However, that 911 call was later determined to be unfounded. Furthermore, radio transcripts and other evidence provided by the City suggest that Officer Ilardi was not assigned to the knife disturbance, nor did he tell anyone he was responding to an emergency. In fact, two other NYPD units had already been assigned to that call.

It’s clear that there needs to be an independent investigation into Ryo Oyamada’s death – and that the NYPD isn’t capable of doing so alone.

Sign my petition calling on the Department of Justice and the NYPD to conduct a full and fair investigation into Ryo Oyamada’s death. The tragic death of Ryo demands nothing less.