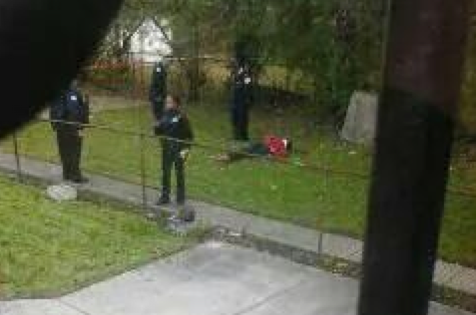 The content below was shared via CopBlock.org/Submit by Panzy, the mom of 15-year-old Dakota Bright, who was killed by a Chicago police employee.

This is my son, Dakota Bright. He was killed November 8th, 2012 at the age of 15 by a Chicago police officer who claimed to be in fear for his life. Dakota was shot in the back of his head and then he was handcuffed and left laying in a backyard for 4- to 5-hours.

CPD officials released the reason for Dakota staying on the scene for so long was to “find” the very gun that Dakota allegedly pointed at an officer.
The officer’s name was never released.
As Dakota’s life was taken away before his time, his family cannot get any type of cooperation from any city officials or of course CPD officials.
The result of this fatal crime carried out on this teenager leaves a very big hole in Dakota’s family that can never be filled.
Panzy Bright, Dakota’s mother, has been protesting and speaking out on her son’s murder by the true killers and gangsters of the Chicago Police Department.

The ambulance was flagged off so he was denied medical attention that may have saved his life. There was no gun on him at all.

If that was not enough they taunted my family – they treated us like we are the criminals yet this officer gets to live his life as if nothing happened.

I constantly see pictures of the young men killed, it makes me sad but it also makes me made because my 15-year-old child’s life was taken by one of these monsters and yet he gets no justice.

About 3:30 p.m that day, he was returning to his grandmother’s place when Grand Crossing District officers approached him, police and family said.

Officials said they ordered Dakota to drop the gun in his hand, but he started to run. Dakota then turned and pointed the weapon at them, authorities said, prompting officers to fire in his direction. A weapon was found at the scene, authorities said.

Police sources said Dakota was a gang member who had been arrested for robbery and aggravated battery to a police officer, though his family denies that he was involved in a gang. His family also said Dakota never had a gun and someone planted a weapon at the scene.

“My cousin was a normal, regular teenager,” said Lenard Clark, 29. “He didn’t deserve what he got.”

Many in the neighborhood said police in the area operate in a state of fear. They also wondered why officers shot Dakota in the head.

Editors Note: A petition at Change.org, started by Panzy, already has over 1,100 signatures. Clearly though, people signing a document is not enough to change the perverse incentives inherent in the policing institution, that itself is based on double standards. Real change will occur only when those responsible are held accountable for their actions. That starts with each of us, not buying into claims of authority put-forth by strangers who themselves subsist on theft.

In her quest for justice, Panzy was encouraged to reach out to known police accountability groups in her area, in the hope that some involved could add capacity, ideas, and traction.