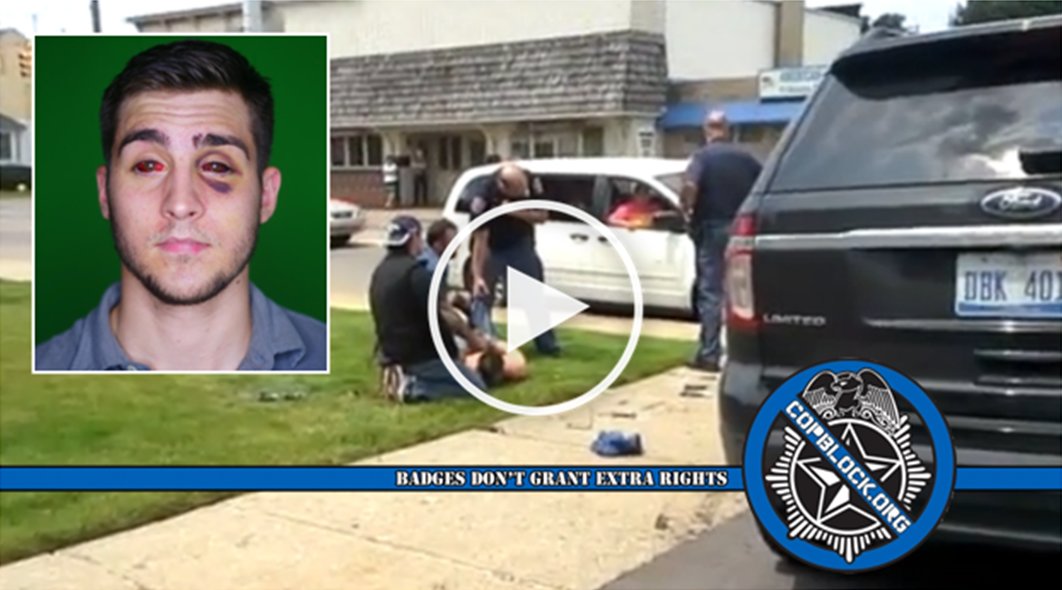 James King was a Grand Valley State University student in Michigan when, on his way to work on July 18, 2014, he was attacked by an undercover Grand Rapids Police detective and FBI special agent.

According to a lawsuit filed on April 4 in U.S. District Court, King says he thought he was being mugged and claims the plain-clothes officers never identified themselves before beating and choking him unconscious.

King said he was walking down Leonard Street NW toward Tamarack Avenue when he encountered Allen and Brownback leaning against an unmarked SUV. The undercover officers were members of a joint fugitive task force and looking for a fugitive that had reportedly been spotted in the area wanted for home invasion.

The lawsuit says the cops determined King, who was 21-years-old at the time, matched the fugitive’s description and approached him wearing only lanyards with badges asking for identification that he didn’t have.

King couldn’t read what the badges said and the cops refused to identify themselves as officers, according to the lawsuit, but he complied nonetheless with a request to get up against the SUV and put his hands behind his head.

The officers latter testified that King’s wallet was removed during a pat down before they attempted to place him under arrest and he asked them, “Are you mugging me?” The lawsuit says when King didn’t receive an answer from either cop, he turned and ran.

The officers quickly tackled King to the ground as he yelled for bystanders to call the police, according to the suit, and they began punching him repeatedly in the head and face prior to choking him until he lost consciousness. Officer Allen would latter testify under oath that he beat King “as hard as I could, as fast as I could, and as many times as I could.”

The lawsuit says when King finally regained consciousness he bit Allen’s arm “in a panicked attempted to save his own life” as bystanders called the police and recorded footage of the incident on their cellphones.

Unfortunately, no footage of the actually beating is available because after uniformed officers arrived on scene, Officer Morris violated several of the bystanders’ constitutional right to record police in public by ordering them to delete their videos.

This is confirmed by an audio recording taken from a dash-cam in which Morris is heard saying, “We got undercover officers there… delete it, delete it. It’s for the safety of the officers. Everybody has cameras… all we used to do was tell the story; we didn’t have a picture to tell the story… We don’t need no pictures.”

According to the lawsuit, Morris later confirmed that two bystanders did in fact delete their videos, but some footage does exist of the aftermath of the beating in which one bystander says, “They were out of control, pounding him. They were being brutal… we thought they were going to kill him.”

In the available footage, a uniformed officer can be heard asking King if he has any weapons to which he responds, “no sir, I thought they were trying to mug me.” King then asks, “please guys, is he a real police?” before the cop tells him to stay on the ground until an ambulance arrived.

Booking photos from jail show his face severely swollen with a black eye and burst blood vessels in his eyeballs. In February 2015, King was acquitted of all charges against him by a jury following a lengthy trial.

“He could’ve faced 10 years in prison, they put him through this trial and he never pled; he fought the good fight,” King’s lawyer, Patrick Jaicomo said. “It became crystal clear to these officers after King arrived at the hospital that he wasn’t the guy they were looking for and yet they still went ahead and charged him with three serious felonies.”

According to the lawsuit, King was forced to drop out of GVSU where he was studying computer science because of the ongoing criminal trial and mounting legal fees, and King’s family spent their entire life savings during the eight-month court battle.

The suit is seeking compensatory and punitive damages, along with attorney fees. Both Grand Rapids police and the FBI have refused to comment on the pending litigation.